Breaking strength of cord when doubled over a pulley

Consider the situation in which a piece of cord is looped over a pulley and both free ends are fixed to an object which exerts a 10 kN downward force. 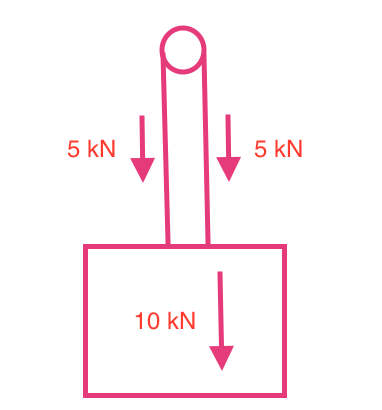 Would the setup hold given a cord with a tensile breaking strength of 8 kN? My instinct says no, due to the fact that the portion of the rope going over the pulley is subjected to the full 10 kN force. This can be depicted easier with two pulleys side by side. 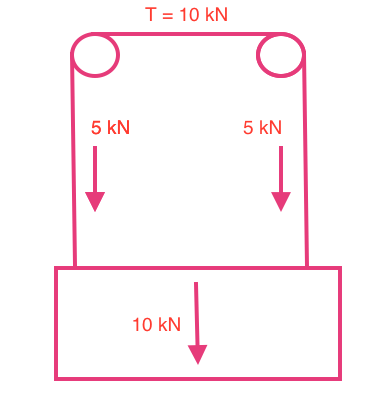 I ask because in rock climbing, a common method for building an anchor involves a loop of cord tied as depicted below. The top 3 carabiners are clipped to fixed points on the rock (bolts, camming devices, etc.) and the climbers then attach to the bottom "master point" below the figure-8 knot.

As you can see, each of the 3 "legs" of the anchor are an example of this pulley problem. I am concerned because in the climbing community, it is accepted as common knowledge that each of the 3 legs will be able to hold twice the rating of the cord (ignoring strength loss due to the figure-8 knot) due the two strands sharing the load.

Is this really the case? Or are the legs only capable of supporting up to the single strand tensile strength rating as I suspect?

I am interested in answers concerning both "perfect" frictionless pulleys as well as how a real world pulley (like a carabiner) would affect the outcome.

Second, for practical ropes, a sharp bend decreases strength. The weakest point will be where it wraps over a carabiner. Another weak point will be the knot, though to a lesser degree than if it was a knot in a single cord, or if it was an overhand knot.

Third, friction has a major effect. Loops are often made by laying two ends of a flat strap over each other and sewing. Seat belts are often done this way. The joint is far stronger than the threads that sew it together. The thread press the ends together strongly. This makes friction very large. Kind of like when a tire sits on the road.

But a single long loop that slides is not a good idea. If the loop breaks anywhere, your whole anchor fails.

You do have redundancy with your design. If the top middle carabiner or cord fails, you have two more still holding.

The best would be three independent cords to three independent top carabiners. And doubled carabiners or one extra strong carabiner (like you have) for the bottom. It is hard to tie this so that all three have tension. One generally will be slack. But it is redundant.

The figure 8 knot is a good idea if you do use one long cord for this anchor. It turns the single loop into three. One leg can break and the other two will hold.

19
Do you feel more impact force when falling straight down or tipping over?
6
How could a cord withstand a force greater than its breaking strength?
4
Why are tensions in the pulley different when the pulley has a mass or moment of inertia?
7
Breaking the bottom board… when there's two
0
How does acceleration carry over when the tension force is at an angle?
0
Acceleration of masses over a pulley
0
Acceleration when pulling yourself with the help of a pulley
0
Does the rope stretch when the pulley of Atwood's machine is accelerated?