How does centripetal force relate to angular momentum? AP Physics 1

The answer to question below is B please tell me why? I thought the answer would be C because by Keplers law and conservation of energy. The total mechanical energy = gravitational potential energy + the kinetic energy, at every point in time energy would be the same because there's not external force. I understand that since there's no net external torque the angular momentum is conserved throughout the whole orbit. Angular momentum is also defined to be the linear momentum times the radius. By Kepler's Law the further away the planet is the slower it will move. Since they sweep out equal area from the planet to the moon in equal time periods. Therefore for angular momentum (Mass x Velocity x Radius) to be conserved if R increase/decrease V does the opposite by the same factor. Please correct me if I'm wrong and explain to me why the answer is B. 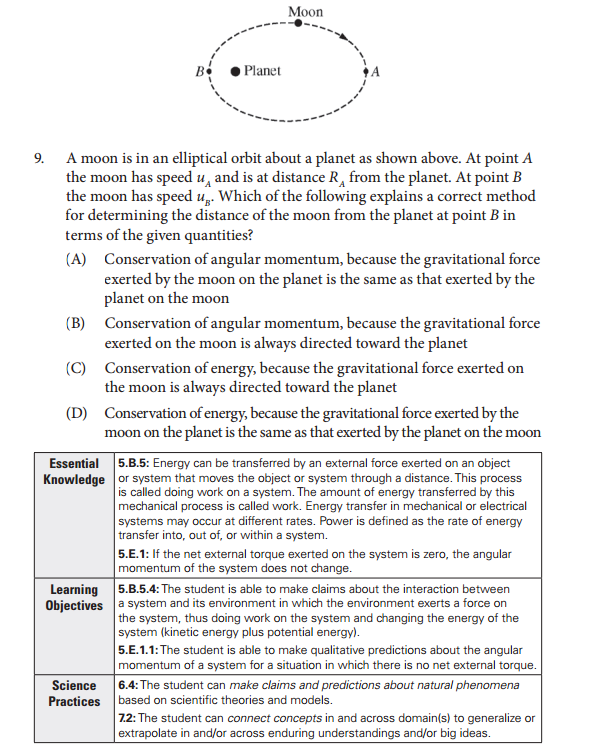 Any response in terms of energy, which is also conserved, would require both the kinetic energy and the gravitational potential energy to be known at positions $A$ and $B$.
You would not be able to find a solution "in terms of the given quantities", $(u_{\rm A}, u_{\rm B}$ and $r_{\rm A})$, as demanded by the question.

Option (C) is incorrect because energy is always conserved irrespective of the direction of any forces.

Not the answer you're looking for? Browse other questions tagged homework-and-exercises angular-momentum orbital-motion orbitals or ask your own question.