He defines $\mathrm{SO}(3)$ as a group with matrix multiplication on a set of orthogonal matrices (which are matrices which satisfy $R^TR = 1 = RR^T$), he then states that this group only includes rotational operators (and not also inverse operators which would be the group $\mathrm{O}(3)$). He does not ever rigorously define 'rotational operation'.

One can define a rotation as an operation that maps an arbitrary vector $\vec v$ to $\vec v'$ through an infinite sequence of infinitesimal operations which leaves the length of the vector invariant.

To exemplify, let us consider rotations in the plane. From the figure bellow 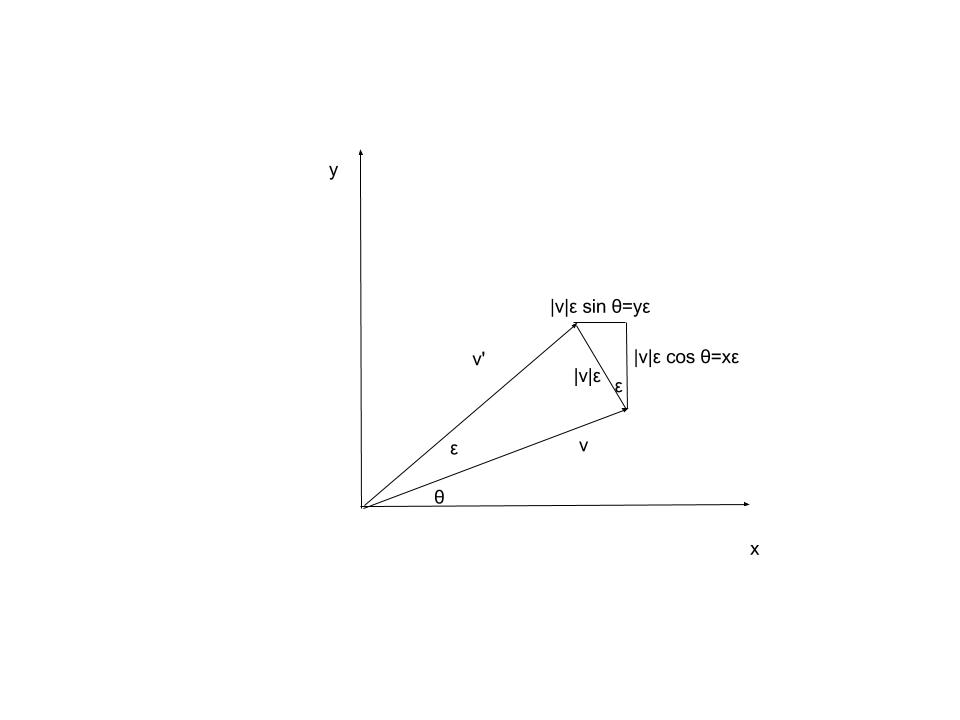 we see that the only infinitesimal operation we can do on $\vec v$ that leaves its length invariant is $$x\rightarrow x'=x-\epsilon y,\quad y\rightarrow y'=y+\epsilon x.$$ Such infinitesimal operation can be written as $$\vec v'=(I+\epsilon T)\vec v,$$ where $I$ is the identity matrix and $$T=\begin{bmatrix}0&-1\\1&0\end{bmatrix}.$$ Now do infinitely many such operations in sequence such that $n\epsilon=\theta$ where $n$ in an integer going to infinity and $\theta$ is a finite real, $$\vec v'=\left(I+\frac{\theta}{n} T\right)^n\vec v=\exp(\theta T)\vec v .$$ The last equal sign is an identity. The above equation defines the rotation by an angle $\theta$, $R(\theta)=\exp(\theta T)$. One can compute this exponential by Taylor expanding and we obtain $$R(\theta)=\begin{bmatrix}\cos\theta&-\sin\theta\\ \sin\theta&\cos\theta\end{bmatrix}.$$

We say that a matrix $M$ represents a rotation if and only if it can be written in the above form. Note that a matrix such as $$S(y)=\begin{bmatrix}-1&0\\0&1\end{bmatrix},$$ which simply maps $(x,y)$ to $(-x,y)$ is not a rotation. It is called a reflection (what you are strangely calling inverse operator).

In three dimensions the infinitesimal rotations are generated by three generators, $T_1,T_2,T_3$ which play the role of $T$ above. They satisfy the commutation relations $$[T_a,T_b]=i\epsilon_{abc}T_c,$$ and form a Lie algebra namely $\mathfrak{su}(2)$. The point is that both groups $SO(3)$ and $SU(3)$ have the same Lie algebra. The infinitesimal operations are the same. Moreover in general one can represent these generators with square matrices of different size. Once we choose the size of these matrices (the choice is not arbitrary), we obtain the group associated to the Lie algebra. For example, if we start with the algebra $\mathfrak{su}(2)$ and choose to represent it by $2\times 2$ matrices, then the group obtained is $SU(2)$. On the other hand if we represent it by $3\times 3$ matrices we obtain the group $SO(3)$. This latter group is indeed important in quantum mechanics. It relates to spin $1$.

$\mathrm{SU}(2)$ is the group of all $2 \times 2$ complex matrices with determinant $1$. The $\mathrm{U}$ stands for unitary, which is the complex version of orthogonal:

where the dagger is the Hermitian conjugate, but everything else is the same (other than the entries being complex). There are four free real parameters because there are six (not-free) real parameters and two conditions, $6-2=4$. Specifically, these are the complex phases of $a$ and $b$ (two real numbers), the relative magnitude of $a$ and $b$, and the value of $\gamma$, which is a single free real parameter (or two reals and a complex condition ensuring it is real).

The important thing about these two groups is that $\mathrm{SU}(2)$ is a double cover of $\mathrm{SO}(3)$. This is why you need four parameters to specify a rotation in 3D space, rather than just three. The Bloch sphere in quantum mechanics is a manifestation of this relationship. The double cover is why the angle is halved when going to the Bloch representation of a qubit.

0
Is spin 1 described by $SO(3)$ or $SU(2)$
72
Why exactly do sometimes universal covers, and sometimes central extensions feature in the application of a symmetry group to quantum physics?
0
Why we need $SU(2)$ symmetry? When we use it?
0
Transformations under some representation

0
On Group Theory: Symmetry Groups and Our Interest
0
Connection to spin 1/2 electron system?
5
Relationship of symplectic group (Hamiltonian structure) to unitary group in quantum mechanics?
30
Why is there this relationship between quaternions and Pauli matrices?
0
Euler rotations and unitary unimodular rotation group in QM
1
What is a rotation group and how do we get its unitary representation?
1
Generators of the $SU(2) $group