Do the heavier elements have a greater affinity for neutron capture and is there a theoretical maximum that can be captured?

This question came to mind while reading about Otto Hahn, Lise Meitner, Fritz Strassmann on the one hand and Seaborg on the other. A natural question ...what is the maximum theoretical transuranic element?

This question does not have a clear answer.

You probably address the superheavy elements problem (SHE). For the moment (imho), all observed superheavies decay by alpha particle decay. So there are two hunts -

The stability depends very much on the nuclear structure and the structure predictions depend on the models. There are models, that predict island of stability somewhere but until experimentally confirmed, nobody can tell about the validity of different models. This is really a terra incognita for nuclear models. 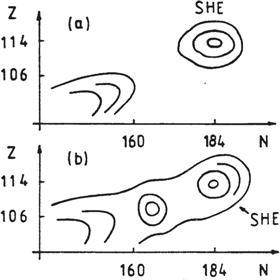 10
Having the same number of neutrons
1
What does a subatomic charge actually mean?
2
Why did Otto Hahn use neutrons to generate transuranium?
4
Lifetime of undiscovered element and its calculation
1
What experiment(s) have or can refute the existence of an electron-particle “system” over the separate existence of a neutron within itself?
3
How did this apparatus actually work - discovery of induced nuclear fission?
0
What is the maximum density that Ultra Cold Free Neutrons can be confined in defined container and conditions for this purpose?
1
Why are all isotopes of tungsten considered (theoretically) unstable?