How does a helicoper auto-rotate? The force of the air pushing on all blades would equal out. Wouldn't it?

So, I was learning about helicopter and how they auto rotate and I learned that when the engine fails the helicopter starts to fall and the air is thrown up at the blades which turns them like a windmill. I though about this for a little and found a issue 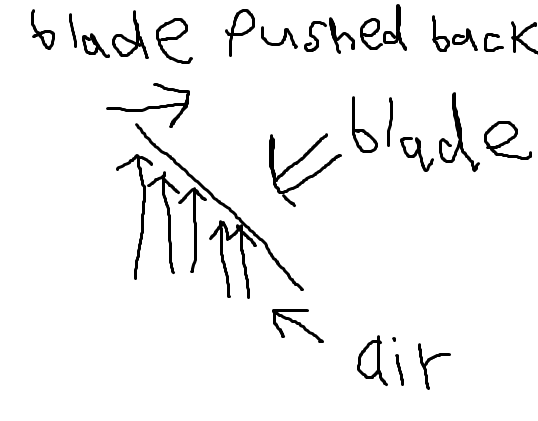 This image shows that the blade is being pushed back .......

In the wrong direction

The blade would have to be moving the other way the create lift. wouldn't it?

I also found another issue. If this force was applied to every blade wouldn't the forces equal out and the blades stay at the same speed.

The video I was watching about this said that the blades and span like a windmill is span in the wind, but the way a windmill spins would push the blades the wrong way.

I tried to google windmills to see if another voo doo magic happened in them but, most results explained how a wind turbine makes electricity which was not very helpful.

I am sorry about the quality of the picture I drew

You are missing one essential detail: The incidence of helicopter rotor blades can be changed. This is called collective pitch.

When power fails, the pilot changes the blade angle such that the spinning direction is maintained but now the rotor extracts energy from the upwards airflow instead of pushing air down. Note that the blades will still create lift, but because of the fact that the flow into them has an upward component, the lift force on the blades is tilted forward such that the horizontal component keeps the blades spinning. Now the helicopter flies much like a glider, continuously trading altitude for forward and rotor speed. This is the same for all blades, and each blade will pull the rotor forward.

Close to the ground the pilot will now pull on the collective pitch lever and increase lift on the blades momentarily. This is a dynamic maneuver and needs to be well coordinated. Now the lift force increases, but the lift vector on each blade will point slightly backwards, so the rotor spins down. Now the pilot is trading the stored rotational energy of the rotor for increased lift in order to reduce sink speed and come to a soft landing. This requires a minimum amount of rotor inertia to have enough energy available for deceleration.

I'll keep my answer short and sweet, because the single best answer you can get is to watch the Smarter Every Day video on how autorotation works. It's 9 minutes, with great visuals helping explain the process, and far better than any text answer could ever be.

For those who don't want to hit the link, one of the major factors in autorotation is the linear velocity of the air across the blades. Air actually travels faster across the parts of the blade further from the center. Helicopter pilots can leverage this trick to create power while falling. The inner parts can be pushed by the air (because the inner parts of the blade are moving slow), while the outer parts actually push air as though the engine was still running!

A pilot will actually adjust the pitch of the blades to balance these effects out to decend slowly while maintaining a bit of extra spare energy to use right near the end to land safely.

It's a good question. The thing with autorotation is, it does not work very well when considered from a standpoint of vertical flight - it's not really a windmill. The best example for explaining the principle of autorotation is the autogyro: it always flies in autorotation, but never vertically. Or at least, never very successfully for long. From Principles of Helicopter Aerodynamics by J. Gordon Leishman:

The picture illustrates a pretty important issue: it identifies lift and drag forces in forward flight. If the autogyro or helicopter would descend vertically, the rotor would create drag only, since drag is defined as the force in the direction of airspeed. Increased drag, like a parachute. The rotor would act like a partially permeable fixed disk. That would not work very well for stopping the autogyro or helicopter from falling.

It is much more effective if the rotor behaves like a wing: forward flight creates a lift force, and drag is overcome by a propeller or by energy absorption from reduction of potential energy. In other words, if it behaves like a glider. Gliders don't glide very successfully in vertical direction either...or at high angles of attack, which is what is indicated in your drawing at 45º. The rotor blades are wings, but sadly with difficult dynamics - please hang on.

When the first autogyro was put to a flight test (way before the first helicopter, in early 1920s) it started rolling when forward speed picked up, because the forward going blade has higher relative wind speed and therefore more lift. The first successful flight, of the C4 in 1923, fixed this by introduction of blade flapping, really quite a brilliant design. From Wikipedia:

The same blade flapping creates a driving torque of the rotor, by difference in drag between forward and rearward facing blades. But it only does that when the collective is fully down. The collective flight handle sets the Angle of Attack of all blades simultaneously, and the first thing the pilot needs to do when the engine stops is to lower the collective. Otherwise the drag in the forward going blade is higher than in the rearwards going blade, and the rotor stops turning.

So autorotation only effectively works with forward velocity. In the last bit, just before landing, the pilot does go almost vertical: he raises the collective, trading rotational energy of the blades for loss of kinetic energy, and he comes to a beautiful soft landing.

Your picture is fine so far as it goes, but...

If the helicopter rotor has 2 or 4 blades, now draw the picture for the blade that is opposite to the first one. The slope of that blade is in a different direction, so instead of being "pushed back" it is "pushed forwards." The combination of the two "pushes" is what makes the rotor turn.

A wind turbine, or any type of fan, works exactly the same way.

It's exactly the same as when an aircraft glides, except the "wings" go in a circle.

As a student pilot in a fixed-wing aircraft you practice this many times. The instructor pulls the power to idle and says "You just lost your engine..." The first thing you do is push the nose down, so you're in a downward glide. Since you're going downward you pick up speed and that keeps you flying. You trim for the speed that gives you the longest glide range, and look for a place to land.

In a helicopter you do it by pitching the blades downward (with the collective lever). This makes them glide, which gives them speed, which maintains lift, so you can look for a place to land.

Not the answer you're looking for? Browse other questions tagged forces drag air aerodynamics or ask your own question.

1
Calculation for force generated by a rotating rectangular blade
2
Air resistance of a general shape object
8
Number of blades in a helicopter rotor
0
Changing number of wind turbine blades
0
Confusion on this Vector Problem
0
Details about mechanics of directly-downwind-faster-than-wind vehicle
4
Do helicopters and planes fly by different reasons?