Experimental verification of the Higgs mechanism

I was wondering whether there was any experimental verification of the Higgs mechanism that gives mass to gauge bosons and fermions. I understand that there are different relations that masses obtained with this mechanism must satisfy and also several new Feynman diagrams.

I thought that we are pretty sure that the gauge boson masses come from the Higgs mechanism but no book I've ever read seems to talk about the fermion masses with certainty. They actually talk of it as just a possible way of giving mass to the fermions.

To verify the Higgs mechanism, we must measure the cubic and quartic Higgs self-interactions, thus reconstructing the entire Higgs potential, and precisely measure the Higgs interactions with fermions and bosons. This is summarized by the introduction of e.g., 1510.07697,

The discovery in 2012 [1, 2] of a Higgs boson exhibiting properties similar to those expected from the Standard Model 3 has been one of the most important developments of the last decade in experimental particle physics ... This observation however only consists of the first ingredient allowing one to establish the Brout-Englert-Higgs mechanism and to fully confirm the Standard Model nature of the observed new state. Any conclusive statement indeed requires, in addition to the information currently available from experimental data, at least a more detailed knowledge of the form of the Higgs potential.

The Higgs mechanism predicts that interaction strength with Higgs should be proportional to mass, and thus far we find good agreement, as indicated below - according to the Higgs mechanism, the data should lie on a straight line. 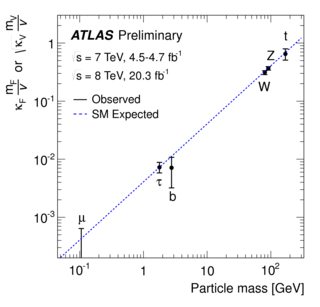 Measuring the Higgs self-interactions, on the other hand, is very challenging with current experiments. See e.g, 1206.5001. Their measurement would allow us to check the Mexican hat shape of the Higgs potential.

We're more certain that the gauge bosons obtain their masses from the Higgs mechanism (or a Higgs-like mechanism). The Higgs interactions with gauge bosons are fixed by gauge symmetry (unlike the Yukawa couplings that give rise to fermion masses) and thus we know them from measurements of the gauge couplings in other processes. The ratio of the measured gauge boson masses, $M_W / M_Z$, is in good agreement with predictions of the Higgs mechanism. Technically, this agreement is quantified by the $\rho$-parameter, $$ \rho = \frac{M_W^2}{M_Z^2 \cos^2\theta_W} $$ which is measured to be almost exactly one, and predicted (at tree-level) to be one in the Standard Model Higgs mechanism (and similar mechanims with multiple doublets or particular relations between isospin and hypercharge).

The Nobel Prize in Physics 2013 was awarded jointly to François Englert and Peter W. Higgs "for the theoretical discovery of a mechanism that contributes to our understanding of the origin of mass of subatomic particles, and which recently was confirmed through the discovery of the predicted fundamental particle, by the ATLAS and CMS experiments at CERN's Large Hadron Collider"

The basic Higgs mechanism gives mass to the gauge bosons in the particle table.

no book I've ever read seems to talk about the fermion masses with certainty.

Well , the wiki link gives a consistent mathematical method for giving masses to the fermions within the standard model .

As an example in this proposal the prediction is:

A typical prediction of this scenario is a significant reduction of the couplings of the observed Higgs boson to the first two generation of fermions.

Their model is beyond the standard model and their predictions are part of what higher and higher energy machines are exploring. So it is an open question theoretically and then experimentaly to be checked.

A Higgs boson factory would give with accuracy the couplings to different interactions. The LHCb 2.5 sigma deviations from standard model might be a clue if it becomes statistically significant.