Confusion with relativity of simultaneity

I know variations of these have probably been asked numerous times before, but I'm having trouble with this specific scenario.

Imagine the classic Train Paradox, except instead of lighting strikes we have an observer at the centre of the train shooting laser pulses towards the rear (Event $e_1$) and front of the train (Event $e_2$). Train is moving from left to right at a relativistic velocity $v$.

For an observer on the station, the light pulse travelling towards the rear has to travel a much lesser distance since the train is moving towards it. Let this distance be $0.5-vt$.

Obviously, station observer, who has a moving reference frame, sees the $e_1$ first.

Let us place another man at the back of the train, since he is at rest with the train, light has to travel $0.5$ (exactly half the length of the train) to reach him.

But according to the station observer for whom light has to travel only $0.5-vt$, the light reaches the man before it actually reaches him, in his own reference frame. How is the moving observer able to see an event before it even happened in the rest frame?

The description you have provided of what happens and who perceives what is perfect. Your question is how can it happen that the platform observer (Sam) perceives that an event $A$ happened $before$ it has happened in the rest frame?

I'll admit that I can't quite pinpoint the issues in the question... partly because I think there are some possible confusions and misconceptions in the setup. I think @Mockingbird highlighted some of the misconceptions.

So, I offer a spacetime diagram on rotated graph paper (so we can visualize the tickmarks) to help clarify the situation. 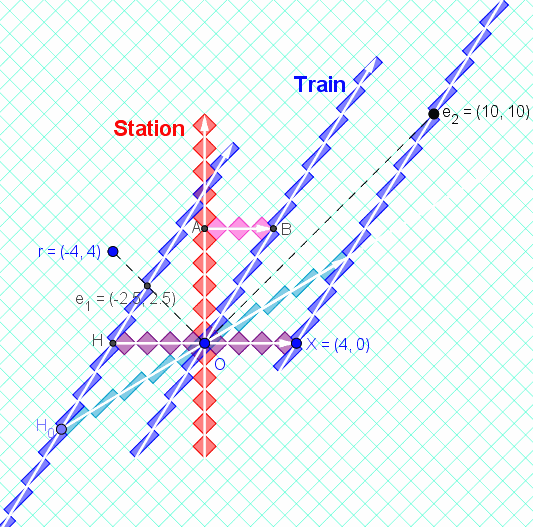 At meeting event O [which both Station and Train assign (x=0,t=0)], light-signals are emitted.

The rear-directed signal arrives at the back of the train at event $e_1$.

So, I hope this will clear up the confusion.

The event of the light striking the rear of the train happens once only and happens at exactly the same instant in both reference frames. The time that has elapsed since the light was emitted is less in the frame of the station that it is in the frame of the train, but that does not mean that the event happens on station before it happens on the train- it just means that the two observers allocate different values to the time coordinate for the event.

Not the answer you're looking for? Browse other questions tagged homework-and-exercises special-relativity inertial-frames observers or ask your own question.