Is existence of incompressible bodies prohibited by Carnot's theorem and Clausius' inequality?

Consider an absolutely incompressible body, which does not change its volume $V$ under pressure $p$ but can expand or shrink when its temperature $T$ changes. Then its equation of state has a simple form $$ T=T(V). $$

Then imagine we are performing the Brayton cycle with this body consisting of two isobaric processes at the pressures $p_1$ and $p_2$, and two adiabatic processes. The latter two processes are also isothermal and isochoric since the body is incompressible. 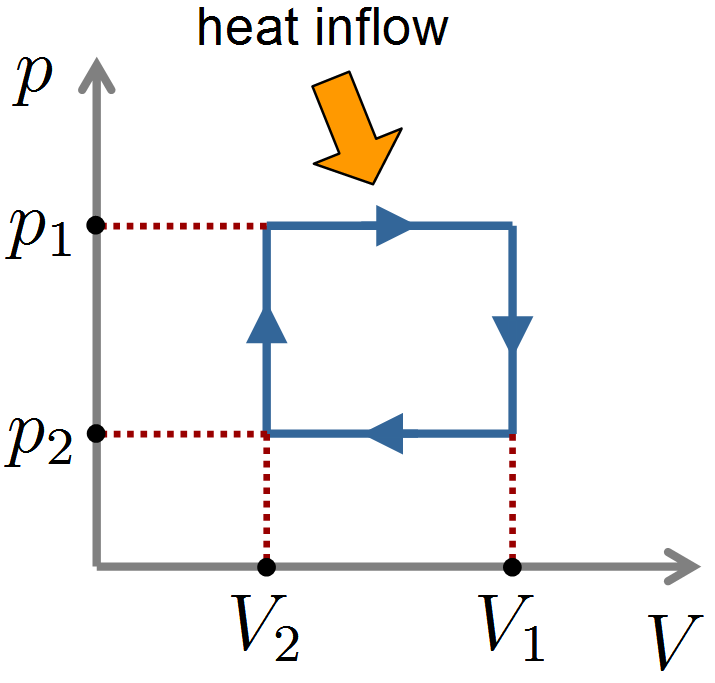 The efficiency of this cycle is $\eta=A/Q_1$, where $A=(p_1-p_2)(V_1-V_2)$ is the performed work and $Q_1$ is the heat received from the hot reservoir. To calculate $Q_1$, we can use the first law of thermodynamics: $\delta Q=c_VdT+pdV$. The Maxwell's relations imply the infinite heat capacity ratio $\gamma=c_p/c_V\rightarrow\infty$ for incompressible body then $c_V=0$ (it can be also understood considering that $T$ and hence the internal energy do not change at $V=\mathrm{const}$).

Indeed, as noted in the comments, the Carnot's theorem is applicable when only two heat reservoirs with fixed temperatures are present. However, it can be easily generalized to the case of variable temperatures. If $T_1$ is the maximum temperature achieved by the reservoir which transfers heat to the system and $T_2$ is the minimum temperature of the second reservoir which absorbs heat then the efficiency of any cycle cannot exceed $$ \eta_\mathrm{max}=1-\frac{T_2}{T_1} $$ (see, e.g., R. Kubo, Thermodynamics (1968), problem 4 on page 85 and its solution on pp. 97-98).

So, now I suppose that even the Clausius' inequality prohibits existence of incompressible bodies. Is this true and how it can be understood?

However, it this case the calculations of the cycle efficiency should be reconsidered because $$ \delta Q=TdS=-TV'dp-(pTV''+TA'')dT $$ implies heat exchange during isothermal/isochoric processes! Thus my assumption about adiabatic nature of isochoric processes is incorrect.

So what is wrong in this case? I see that some results seem strange (e.g., dependence of $U$ on $p$ at $T=\mathrm{const}$), but are there any fundamental problems (with stability, existence of thermodynamic equilibrium etc.)?

So the equation of state $T = T(V)$ is pathological, and lets you derive all sorts of silly results:

This is what I think: A true thermodynamic variable must be a function of two others. Therefore $T=T(V)$ is not a thermodynamic variable. However we have encountered such a pathology before: for ideal gas we have $U=U(T)$. In your very first equation you are piling both of these pathologies together to get $\delta Q=dU+p~dV=C_vdT+p~dV$. I suspect nothing good will come out of this! In this equation $T$ and $V$ are not independent variables. But in writing down $\delta Q=p~dV$ you have assumed that they are independent. More correctly: $\delta Q=\left( C_v\frac{dT}{dV}+p \right)dV$.

P.S. I am not sure why you keep calling the body in your question, characterized by $T=T(V)$, an incompressible body which actually requires $\frac{\partial V}{\partial p}=0$.

26
Efficiency of Stirling engine and Carnot's theorem
1
Otto cycle efficiency described in pressure ratio (instead of compression ratio)
3
Clausius Inequality with three reservoirs
0
Efficiency of a 3 stage engine
1
Why doesn't the heat in the two isochoric processes count towards efficiency calculation in Stirling cycle?
0
Looking for the efficiency of an adiabatic–isobaric–isochoric thermodynamic cycle
1
Confused with Entropy and Clausius inequality
1
Entropy change of reservoirs in a thermodynamic cycle