Reading Wangsness's Magnetic Fields book I stumbled upon an explanation I can't understand. It goes like this: There's an alternating current solenoid with radius $a$. We know the magnetic induction is

My question is: How de we know we can expect this? Why not to expect a $\rho$ component for the field?

According to the Maxwell equations, in the areas where the current density is zero, the temporal derivative of the electric field equals the curl of the magnetic field (up to a constant factor). You may wish to look at the expression for a curl of a vector function in cylindrical coordinates (http://isites.harvard.edu/fs/docs/icb.topic970148.files/Spherical_coord.pdf)

Isn't the simple answer Gauss's law? The net charge inside any imaginary cylinder co-axial with the solenoid is zero, so the net electric flux emerging through the cylinder walls is zero. But by symmetry, if there were a radial electric field component it would be the same at all points on the cylinder so there would be either a net outward flux or a net inward flux. So the radial electric field component must be zero.

A general symmetry argument can be used:

*) If a system admits a symmetry plane (invariant by mirror symmetry), the electric field (true vector or polar vector) at a point on the plane is in the plane while the magnetic field (pseudo vector or axial vector) is orthogonal to the plane.

*) It is the opposite for an "antisymmetry" plane (system invariant by a mirror symmetry followed by a change of the sign of the charges).

In your example, the plane containing the axis of the solenoid and passing through a point M is an antisymmetry plane and therefore the electric field at point M is orthoradial.

These symmetry properties are contained in Maxwell's equations. They could be proved by using directly Jefimenko's equations as we do in statics with Coulomb's and Biot and Savart's laws.

But one can also justify them by invoking the invariance of electromagnetism under parity: One cannot distinguish right and left with an electromagnetic machine. And so, if we build a machine that is the image in a mirror of a first machine, it continues to function by remaining the image in a mirror of the first machine. The Lorentz force must therefore be transformed accordingly. 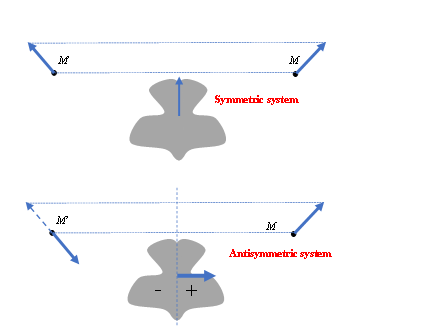 For a system which is its own image (symmetrical), this requires that the electric field at two symmetrical points is symmetrical and that the magnetic field is "antisymmetrical" (because of the vector product).

The relevant equation is

where we have used Stokes theorem on the LHS of the equation between the first two lines and $C$ is the loop bounding our circular cross section. Since this circular path is always directed along $\hat{\phi}$ the closed loop integral only picks out the $\phi$ component of the electric field.

Moreover, using Gauss' law and the fact that there is no charge inside the solenoid

where the closed surface we are integrating over is a cylinder coaxial with the solenoid, $E_{\rho} = E_{z} = 0$, since these are the only components of the field contributing to the surface integral.

0
Current Source that produces transverse electromagnetic field
1
Can Ampere's Circuital law be used on an infinite number of alternating Helmholtz coils?
1
Field of Solenoid
0
Logical argument to components of magnetic field of infinitely long solenoid
3
Trajectory of charged particle in a solenoid lens
1
Induced electric field in circular wire around solenoid
3
Energy and Poynting vector in a solenoid
1
Is induced EMF proportional to the square of the number of turns of a solenoid?
0
Magnetic field of a cylinder inside an AC solenoid
0
Induced magnetic field due to current density in solenoid