Is there a zone where 'colour' overlaps between double rainbows?

Someone on social media posted this question based on a conversation with their (very cluey and creative) kid.

Is there a zone between double rainbows where the 'colour' overlaps? 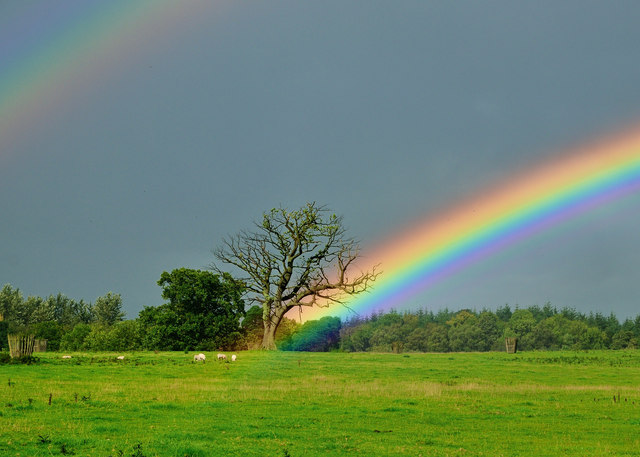 I think the outer, red band of the main, inner rainbow is at 42 degrees from rays coming from the Sun (so, let's say it would be at 42º above horizontal, looking East, if the Sun was helpfully positioned at the horizon behind you). While the inner, red band of the secondary, outer rainbow would be at 52º from rays from the Sun (so, looking East at 52º above horizontal).

So I would imagine that an 'overlap' would happen at 47º above horizontal, ie half way, assuming refraction linearly proportional to wavelength (true?). And that it would happen at $\lambda_{overlap} = 1677 nm$, just scaling wavelength/angle.

Again, that's just assuming the relationship is linear, and using a fairly approximate 430nm for blue and 770nm for red.

I guess the two things that might make this NOT true are a) absorption of IR light by water, and b) whether the main or secondary path hit a critical angle (for total internal reflection) as it exited the water droplet.

Light from the Sun extends beyond this into infrared, so there's still plenty of light at 1677 (see red line in this graph). Also (from the blue line on that same graph), I think 1677nm is not one of the bands that's absorbed by the atmosphere, and also not high enough that it would all be absorbed by water (green line).

If there was such an overlap zone at 1677nm, would it be detectable via instruments?

I would love an equation that gave exit angle per wavelength for the two paths, or even better an interactive graphic that showed the paths within the droplet. 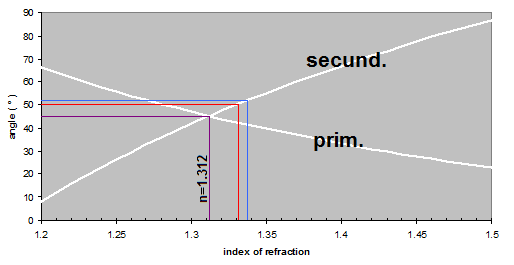 The graphs of $\phi_0(n,1)$ and $\phi_0(n,2)$ intersect at n=1.312. This index of refraction corresponds to a wavelength of about 1600 nm. (Fig 8) Probably an infrared camera for this wavelength exist, but it might produce an unspectacular black and white image.

Not the answer you're looking for? Browse other questions tagged optics refraction absorption or ask your own question.

3
Double rainbows
0
Is there a liquid for which the primary and secondary rainbows overlap for visible wavelengths?

9
Purple doesn't occur in rainbow - or does it?
4
Shape of the rainbow
2
Calculating the rainbow angle
4
Why is rainbow always circular?
1
Why rainbows form around flashes?
9
Rainbow in cloud near Sun
0
Is there a liquid for which the primary and secondary rainbows overlap for visible wavelengths?
0
Why is the sky near the Earth limb warm-colored, even far from the sun?