Does having the engine pushing at the rear of a steep railway have any mechanical advantage over an engine pulling from the front?

After recently visiting a mountain railway, some friends and I were told the engine pushed the carriages up the mountain from the rear and also remained in the same position leading them back down the mountain.

It was supposed that this was to prevent carriages running away when ascending or descending, but one friend suggested that a mechanical advantage may be gained by having the engine in this 'lower' position rather than the higher. His postulation is that the engine would experience a greater downwards force (weight) and therefore more friction (/bite) between the rails and the track, thus making the engine more efficient, allowing it to exert more force on the carriages with less energy wasted in slippage. 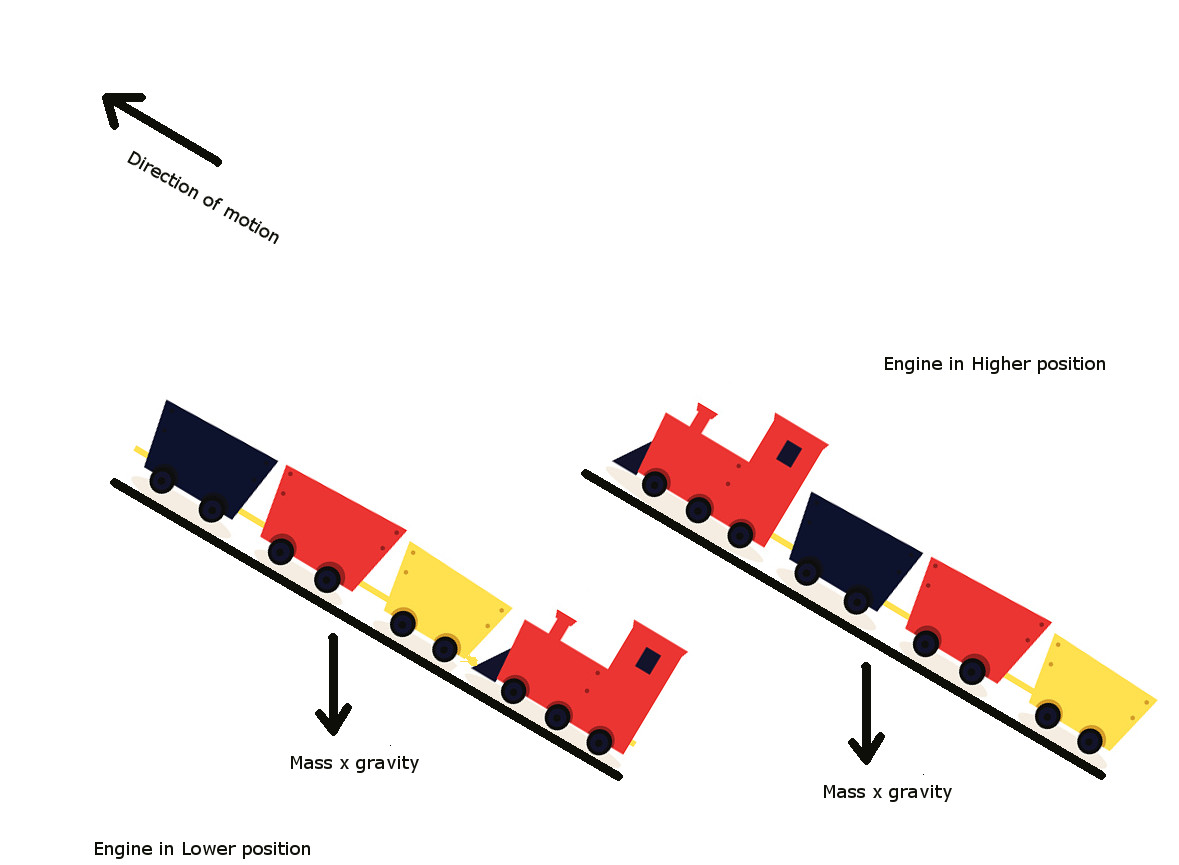 I thought about the force acting on a single wheel on a slope, and I believe it's resolved as:

Is there any way the lower position could have any advantage?

Note: The discussion is purely theoretical since it turned out the railway operated on a cog and rack system :)

Having read the input from HsMjstyMstdn and Floris, it appears that (depending on a rigid coupling) a downwards force would be applied by a carriage that would counteract the torque that $could$ lift the wheels of the engine, and reduce friction. Is this equal in both push and pull cases, or could the position mean one is less likely to 'lift' and less likely to slip?

Also, how would one refer to this downwards force? I feel like it's not weight, but it is acting in the same direction.

Great question. I'm surprised that upon searching, I haven't come across a train-push vs pull question in Physics SE. I'll try to give a detailed answer.

TLDR; Conceptually, the pulling engine is better but both push and pull trains are doable and exist in real life. If you're talking about an idealised thought experiment, I don't think there's a difference.

Now, let's talk details. Your force reasonings are accurate in that, you do no more work pulling a weight up a hill than you do pushing it. The normal/reaction force that is relevant to the friction experienced is perpendicular to the push/pull force and as such, cannot contribute to friction's magnitude. However, it doesn't really matter since train wheels almost never slip. Of course, there is the occasional slip where ice, grease, organic matter, etc. are concerned but steel on steel with heavy weight makes for some impressive tractive force. See this question for more details.

In real life, many train companies use both push and pull methods. In a push-pull train, you have dual locomotives in the front and back, sometimes working together, sometimes taking turns. Companies also do pull trains one way and then push them back, saving cost and having to turn the train around. If we're talking pull-only vs push-only trains, it's a different story.

In response to the updated question, with a rigid coupling, both the pull and push engines have things resisting the torque "lift" of the train (weight of front load in push-engine and the back portion pushing into the ground in pull-engine). Note that whether the locomotive is front-wheel, rear-wheel or all-wheel drive is relevant. That being said, I still maintain that the pull-engine is superior because the point here is essentially that the train is doing a power wheelie. The best way to mitigate wheelies isn't by moving more weight to the front of the vehicle, it's by adding a wheelie bar.

The picture in HsMjstyMstdn's answer gave me a thought (although I believe this is not what the picture was attempting to show...):

When a locomotive pushes a heavy train up a slope, it will be required to generate lots of torque with the driving wheels.

Now when you are pulling, applying a lot of torque might make the front of your locomotive lift up (think drag racing cars). But if you are pushing, the front of the locomotive is actually held down by the weight of the car it is pushing.

I think that is sufficient reason for putting at least one wagon in front of the locomotive - but since it would be inconvenient to have the engine in the middle of the train it makes sense to put it at the downhill position.

10
Grip of the train wheels

12
Static Friction - Only thing that can accelerate a train?
10
Does a car use friction to move?
4
Would a three wheeled vehicle be faster than a four wheeled vehicle of the same weight?
0
Are more wheels helpful?
7
Can kinetic and static friction act at the same time for this object rotating inside an accelerating cylinder?
2
Does Angular Momentum from the engine of a car affect said cars ability to corner?
6
Calculating the direction of friction on an inclined plane/Determining the fate of a round body on an inclined plane
2
Shouldn't length contraction cause friction under certain circumstances?