What's the difference between a meson and a glueball?

There is a blog post by Matt Strassler about the structure of hadrons.

He contrasts the "conventional" picture of hadrons shown below: 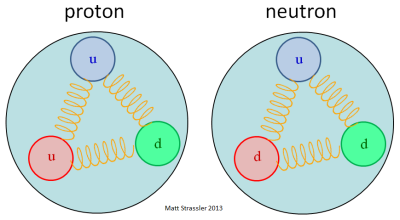 with one that he considers to be more accurate: 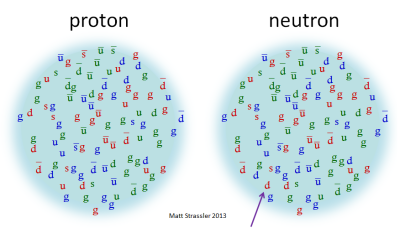 From the second figure, one would be led to believe that there is no such thing as a "valence quark", and that the only reason we say that a proton contains two up quarks and one down quark is that (up quarks - up antiquarks) = 2 and (down quarks - down antiquarks) = 1.

Unfortunately, it appears that such a model cannot explain the difference between a glueball and a flavourless meson of equal spin. Both would simply be a fuzzy cloud of quarks and antiquarks in equal number, together with some gluons. How could we decide which one is a glueball and which one is a meson?

Do we understand the actual state of the quark and gluon fields inside a hadron well enough to give a criterion based on the field configuration that distinguishes mesons from glueballs? Or is that distinction purely based on experimental data? (i.e., when this particle collides with other particles it "behaves" as though there are 2 quarks inside it)

This is a good question, and the basic answer is "there is no rigorous difference" (which is the main problem with experimental efforts to identify glueballs).

1) Electrically charged states, or neutral particles that are part of an isospin multiplet are clearly mesons. This means your question can be narrowed down to distinguishing isospin singlet mesons from glueballs.

2) Historically, what people tried to do is find states that are "unusual" in some way. States that do not fit into the quark model classification, states that are preferentially produced in "gluon rich" environments, like $J/\psi$ decays, or states with unusual decay patterns. (This has not led to an unambiguous discovery).

3) A more modern method is to look for isosinglets, and then try to match a lattice QCD calculation to the observed spectrum. On the lattice you can check whether a given states preferentially couples to $\bar{q}q$ or $G_{\mu\nu}G^{\mu\nu}$ operators. This is an ongoing effort.

4) On the lattice you can also study the dependence of isosinglet masses on the quark masses. If the masses are infinite then all states are glueballs. As you reduce the quark masses new states appear that at large mass scale linearly with $m_q$. These are mesons. Now you can try to follow the mesons to the physical point (this is not so straightforward because of level crossing and miixng).

Do we understand the actual state of the quark and gluon fields inside a hadron well enough to give a criterion based on the field configuration that distinguishes mesons from glueballs?

Yes, we have the standard model of physics, and calculations have been carried out within that model.

The constituent particles of glueballs are gluons, i.e. the elementary particles in the standard model, which are the gauge boson of the color SU(3).

Theoretical studies of glueballs have focused on glueballs consisting of either two gluons or three gluons, by analogy to mesons and baryons that have two and three quarks respectively. As in the case of mesons and baryons, glueballs would be QCD color charge neutral. The baryon number of a glueball is zero.

A review and a talk by the same author

Calculations within QCD (lattice and sum rules) find the lightest glueball to be a scalar with mass in the range of about 1000–1700 MeV. Several phenomenological investigations are discussed which aim at the identification of the scalar meson nonets of lowest mass and the super-numerous states if any. Results on the flavour structure of the light scalars f0(500), f0(980) and f0(1500) are presented; the evidence for f0(1370) is scrutinized. A significant surplus of leading clusters of neutral charge in gluon jets is found at LEP in comparison with MCs, possibly a direct signal for glueball production; 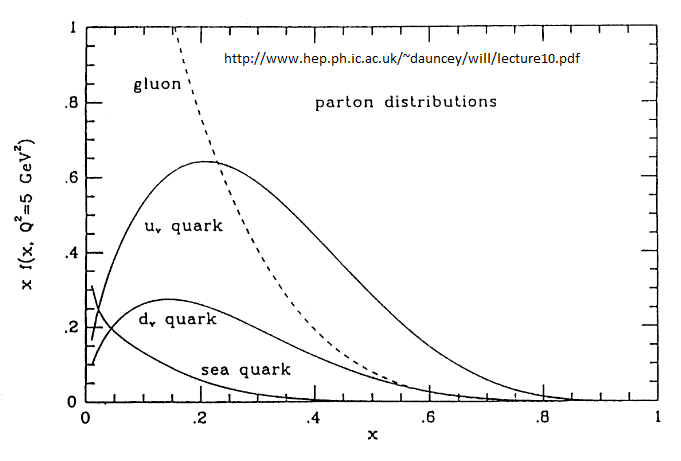 and the gluons carry half of the interaction energy in the proton. One can see that the valence quarks have a different behavior.

It will be something similar in a glue ball, where most of the energy will be carried by the valence gluons and the sea gluons and a small part by the sea quark antiquark.

0
When are decays into quarks kinematically possible?

6
Does the color of a quark matter in a meson?
5
Why Do Glueballs Have Mass, When Individual Gluons Are Massless?
0
Gluons and mesons
1
What is the significance of finding quark-antiquark pairs in hadrons?
2
If quarks can't be isolated in the first place, how did they become confined in the early universe?
6
How much of the proton's mass is due to the Higgs field?
0
Why the mesons $\pi^0$ and $\eta$ are "degenerate"
3
Meson as hadron and boson
9
Is it possible for an isolated quark to exist if it's bound to one or more non-virtual gluons to render the system color neutral?