Why sometimes we cant use force analysis must always use energy conservation or the work energy principle? 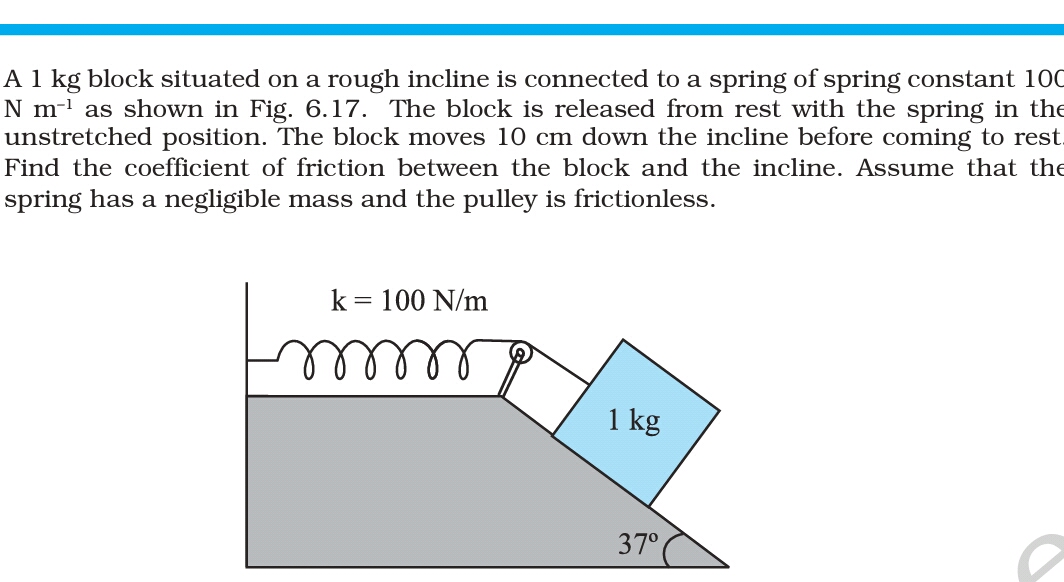 According to the solution for this

It says work done by all the net forces on the block equals the potential energy of the spring at equilibrium and to calvulate work done it only considers the frictional force above the plane and the work done by gravity not work done by tension. Why tension does no work here ? Here the elongation of spring must be $0.1 m$ too.

But why is there no tension here won't the $1 kg$ block push the string and at first the spring will yield and then slowly it will oppose and tension should come.

Also why do we have to use energy analysis here why the answer comes wrong when I do by force analysis ie at equilibrium I equate force $kx$ to net force on block ie $mg sin(37°)$ - $f$ where $f$ is force of friction?

Even though the laws of motion allow us to deal with a whole range of problems, they fall short when it comes to variable forces. Remember that all the kinematic concepts or the dynamical problems you dealt with so far had constant acceleration.

The problem you've shown has a spring. And the spring force is not a constant force. It's a very good example of a variable force governed by the relationship:

Where $\vec{x}$ is the displacement of the spring from it's intial position.

Since the displacements of the spring (a stretch or a compression) are in one dimension. The formula is often written as

Note that writing the force as $F(x)$ brings out the fact that it is not a constant. It is a function of the extension or compression $x$ of the spring.

I hope you can now understand why you're getting a wrong answer when you're blindly equating stuff. When you follow the incorrect approach, you assume that the force is constant.

Hence the concepts of work and energy often simplify problems.

The system consists of the spring and the 1kg block. The solution is looking at work done on the system by external forces, which are gravity and friction. Tension in the spring is an internal force.

The net work done on the system by the external forces equals the increase in the internal energy in the system. In this case there is only elastic PE because the block "comes to rest", but in general there could also be internal KE in the system if the block is moving.

Not the answer you're looking for? Browse other questions tagged homework-and-exercises newtonian-mechanics energy-conservation work or ask your own question.

3
Having trouble understanding the work-energy principle intuitively
2
Why does the work done by an internal force differ from the work done by external force?
0
Why do we not consider tension force to calculate work?
2
Why use Work-Energy Theorem here?
2
Why the work done by system not stored as potential energy?
0
Isn't friction on an incline coefficient of friction times the Reactional force?