I read that a proton cannot decay because it is the least massive baryon. However, in positron emission, the proton converts to a neutron a releases a positron. Is that considered a proton decay?

A free proton will never decay, because there is no less energetic state that has can be reached while respecting all laws of conservation. In a bound state, i.e., in a nucleus, there may be such a less energetic state, because the binding energy can compensate for the larger mass of the neutron, with excess energy for the emitted positron.

Within the standard model of particle physics the proton is composed out of three quarks and there are no possible Feynman diagrams that could give a decay of a proton within the symmetries of the SU(3)xSU(2)xU(1) model because conservation of baryon number is built in the model, and the proton is the smallest mass bound state of three quarks , and thus is stable. The answer by Neuneck covers the nuclear physics part within the standard model.

But there are extensions of the standard model, the Grand unified theories , GUT.

Grand unification refers to unifying the strong interaction with the unified electroweak interaction. The basic problem of "restoring the broken symmetry" between the strong and electroweak forces is that the strong force works only on colored particles and the leptons don't have color. You have to be able to convert quarks to leptons and vice versa. But this violates the conservation of baryon number, which is a strong experimental nuclear physics principle. Baryon number minus lepton number (B-L) would still be conserved as a quark is changed to an anti-lepton. The required mass of the exchange boson is 10^15 eV, which is more like the mass of a visible dust particle than that of a nuclear entity. This particle is called the X-boson.

One prediction of the grand unified theories is that the proton is unstable at some level. 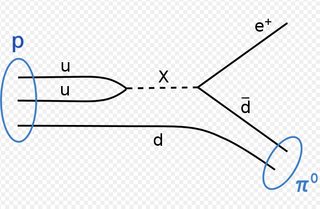 Experiments are running to check for proton decay and they only set limits which, at the moment, are for lifetimes of ~10^34 years.