I have the Hamiltonian:

I know that when both eigenvalues are 0, the system is unstable, but after integrating it with matlab I find ellipses around (0,0) nonetheless. What is happening?

I'm just learning dynamical systems, so a bit of help might come in handy.

Your system is called "intrinsically non-linear" and is discussed in P.Mohazzabi, "Theory and examples of intrinsically nonlinear oscillators", Am.J.Phys. vol. 72 (2004) 492-498.

The potential is illustrated in the figure. The "issue" is that it is too flat to be approximated by something like $V\approx V_0+\epsilon\frac{\beta}{2}x^2$, i.e. $\beta=0$ for this potential: the usual stability theory, which is based on expansion of $H$ to $\epsilon^2$ near the fixed point, will just not work. 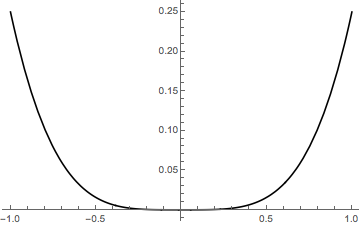 Not the answer you're looking for? Browse other questions tagged homework-and-exercises hamiltonian-formalism phase-space stability complex-systems or ask your own question.