Can an object with mass travel at the speed of light?

according to the Einstein, no object mass with can reach the speed of light. but in the electron gun the speed of electron can be calculated from $$E_k = \frac{1}{2}mv^2 = eV$$ and because $m$ and $e$ are constants the equation would be

does this mean that the electron can travel at the speed of light ?

The correct equation for the kinetic energy of a massive particle is:

There are two types of masses: rest mass and relativistic mass. The rest mass is an intrinsic property of the material and is also known as invariant mass (for reasons you will know soon).

The relativistic mass depends on the velocity whereas the rest mass is independent of the velocity.

The relatvistic mass increases with velocity as follows:

For $v << c$, the $\gamma$ term is approximately equal to one. For such velocities, we assume that the mass of the object remains fixed.

The graph given below represents the variation of the Lorentz factor ($\gamma$) with speed of the object. 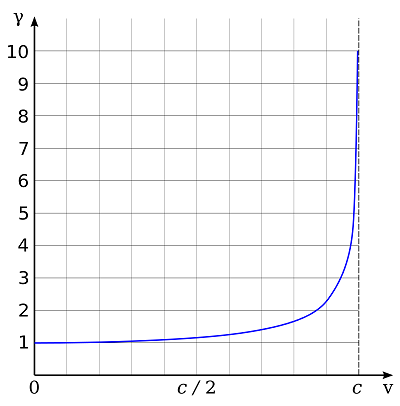 In our day to day experiences, we do not deal with such fast moving objects. Therefore, we needn't worry about the relativistic effects. For simple problems in physics, we ignore such effects and take the mass to be equal to rest mass for all velocities.

Not the answer you're looking for? Browse other questions tagged special-relativity kinematics speed-of-light faster-than-light or ask your own question.

1
Reason why only massless particles can travel at speed of light?
-2
Is there any hope of inventing a mirror that can slow photons down?