Moment of Inertia of Torus

I was trying to find the moment of inertia of the Torus with respect to the axis in the center perpendicular to the bigger circle's plane; see image: 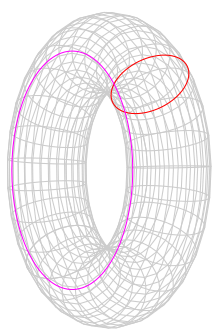 What have I done?

Well, first I integrated the moment of inertia of the disk with respect to a axis perpendicular to it's center, integrating small rings. My answer matched the tabled result: $\frac{1}{2} MR^2$. In this image, the $Z'$ axis:

Then, I used the perpendicular axis theorem to get the moment of inertia with respect to one axis that is a diameter of the circle (for example, $I_x'$ in the image). I got another expected result: $\frac{1}{4} MR^2$.

Ok, so now I use the parallel axis theorem to get the moment of inertia of the red disk in the torus with respect to the original $I_z$ axis. This result is obviously not tabled but the math is very simple and it gave me: $M(\rho^2+R^2/4)$.

Ok. That's for a disk of mass $M$. But if the disk has mass $\mathrm{d} m$, and they are all the same distance from the center axis, I just integrate all the disks in the torus to get the final moment. As you can see, this integral will just be a simple sum, and the result will be the same:

Seems like a simple problem, but it's bugging me a lot.

Moment of inertia depends on the distribution of mass about the axis of rotation. If the mass of an object is rearranged in any way that keeps every element of mass at the same distance from the axis, the moment of inertia does not change.

So you can cut the torus along the red circle, unfold it into a cylinder, and then squash it to make a flat disk of radius $R$, with the red circle as its circumference. You found the MI of this disk about an axis through its centre and parallel to the z axis. Then you used the parallel axis theorem to find the MI about the z axis, which is distance $\rho$ from the centre of the disc.

The above calculation is plausible but flawed. The mistake is that you assumed the red disk has a uniform density. It does not. In the torus the amount of mass increases with radius from the z axis. When the torus is opened and straightened to make a cylinder, the inner side must be stretched, reducing density, while the outer side has to be compressed, increasing density. So the density of the red disk increases with distance from the z axis. 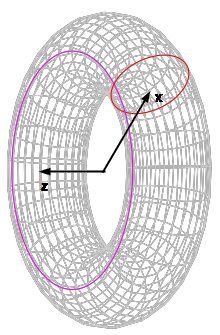 A surface element on the torus is defined by

The mass of the torus is

The mass moment inertia tensor of the torus is 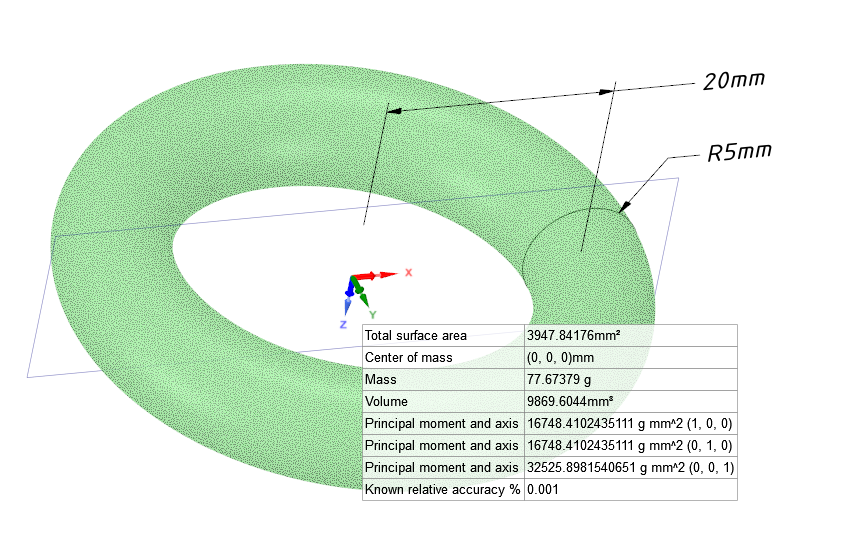 Not the answer you're looking for? Browse other questions tagged homework-and-exercises geometry moment-of-inertia or ask your own question.