Wave propagation is characterized by the wavenumber $k$ and the angular frequency $\omega$. Sometimes (like in this answer) the relation $\omega (k)$ is preferred; sometimes instead $k ( \omega)$ is used.

But what does happen if $v_g \to 0$? Will the second expansion have an infinite first-order coefficient? The same question is for the second derivative quantities. The two expansions should be interchangeable, anyway they seem to be different.

Let us write the dispersion relation in a mathematically clearer version :

Say you want to compute the group velocity at $k_0$. It is defined as:

Up to this point this is a definition and if $v_g(k_0) \rightarrow0$ it means that the derivative of the dispersion function $f$ at $k_0$ is $0$, which is completely possible.

Now let us look at the inverse dispersion function $g$ defined by:

Note that this formula is only valid when $v_g(k_0) = \frac{df}{dk}(k_0) \neq 0$. This means that when you say that the two terms should be interchangeable, this is not mathematically true. It is only the case if the dispersion function $f$ is invertible around $k_0$ and its derivative at $k_0$ non zero. This solves mathematically the paradox that you are evoking.

To sum it up, it means that you have to chose a definition for the group velocity, and the most common one to my knowledge is $ v_g \equiv\left.\frac{d\omega(k)}{dk}\right|_{k = k_0}$. If it goes to zero at a certain value $k_0$ it means that the dispersion function has a horizontal tangent at this point, and that the reciprocal dispersion function has an infinite slope at a given value $\omega_0$. This doesn't imply anything on definition of the group velocity, since it is a definition !

I hope my answer was clear enough. 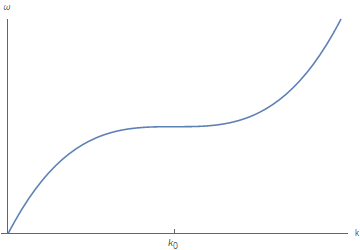 The graph of $k(\omega)$ is just the mirror image, obviously it will have a vertical tangent at the respective point: 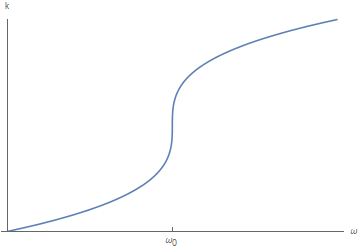 So yes, the first derivative diverges and the function $k(\omega)$ can not be expanded around this point.

Not the answer you're looking for? Browse other questions tagged quantum-mechanics classical-mechanics optics waves velocity or ask your own question.

1
Q factor of driven oscillator
0
Why doesn't the group velocity of a plasma EM wave equal the phase velocity here?
1
Group velocity with gaussian pulse
3
A small error in Landau & Lifschitz “Mechanics” (3rd ed.)?
1
Sinusoidal drive of two level system: why can we ignore one of the two terms?
2
Higher-order dispersion in non-linear optics
1
A query on group velocity of light in a vacuum of 30c
4
How to calculate the phase and group velocity of a superposition of sine waves with different speed and wavelength?