How do Anamorphic images work? [closed]

I found the following anamorphic image on this site 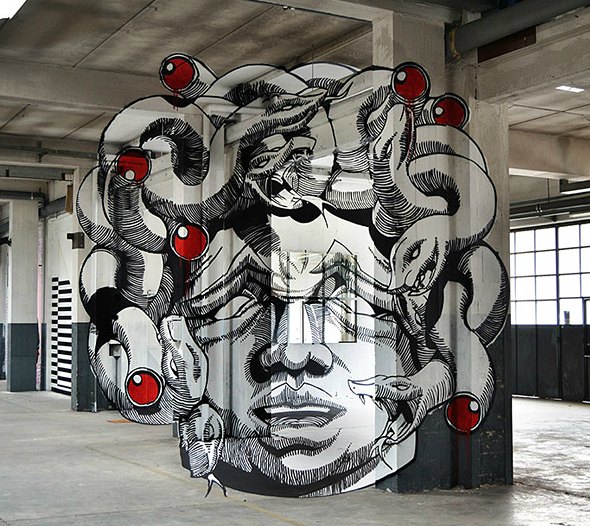 Can anyone explain the physics behind the working of such images? Can we create our own anamorphic images? If so how?

There isn't really any "physics" behind it; it's just an optical illusion. The artist must have projected an image of Medusa from the exact point at which the photo was later taken, and painted the projected shapes on the floor, columns, and walls. If you look at the painting from any angle except the one pictured, the shapes no longer make sense.

Artists often do similar things on sidewalks with chalk, where you have to be standing at a particular vantage point to observe the image correctly (undistorted).

Can we create our own anamorphic images? If so how?

All you need is a projector that will project the image you want to draw onto a surface, or a series of surfaces, at the angle you choose, and then trace over the projected shapes.

Alternatively (as the sidewalk artists do), you can take a photo of your subject at the desired angle, draw a grid over the photo, then draw an elongated grid on the sidewalk, then copy the image from the photo to the sidewalk one square at a time.

Not the answer you're looking for? Browse other questions tagged optics imaging or ask your own question.

5
Optical explanation of images of stars?
0
Encoding multiple images in 1 beam
1
How do we distinguish virtual images?
0
When does the retina fail to recognize images of two closely separated points as distinct?
4
Why do we see a blurred image when the screen is not placed at the position where the image is formed by a convex lens?