I was recently reading about the event horizon of black holes and came across the fact that, to a "stationary" observer, it takes forever for someone to fall into a black hole. The sources claim that this is because, with Einstein's theory of relativity, the clock of the person who is falling into the black hole will be essentially stopped. However, I find this slightly confusing.

General Relativity allows non-trivial topology in spacetime. For instance, it's possible that the universe is 'closed' in the sense that there is a finite amount of space in it, like there is a finite surface area on the surface a sphere. Consequently, it is not generally possible to use a single coordinate frame (i.e. a single choice of $(x,y,z,t)$ coordinates in one reference frame) which can map out every point in spacetime.

In your black hole example, here on Earth with our natural $(x,y,z,t)$ coordinates, anything which passes the event horizon no longer has any sensible $t$ coordinate, because the $t$ coordinate explodes to $\infty$ as an object approaches the event horizon (see below). Another way to look at this situation is that our usual choice of coordinates (Schwarzschild) cannot extend into (or out of) the black hole. The event horizon is a singularity in coordinate choice only, not a physical singularity. Much like how the North and South poles of Earth are coordinate singularities in a lot of the common map projections of Earth. Is there something supernatural happening at the poles? Of course not. It's just because we chose to chart our Earth in a particular way.

The coordinates we would generally use are Schwarzschild coordinates. Forget about $(x,y,z)$ and let's just look at the $1$-dimensional line straight from Earth to a distant black hole. The spacial distance along this line is $r$. This is the model we would use for the gravitational field of a single black hole where spacetime is otherwise flat (i.e. no dark energy; no dark matter; no expansion).

Here's what the Schwarzschild coordinates look like as we approach a black hole (taken from George Jaroszkiewicz's lecture notes at the University of Nottingham). The black hole singularity is at $r=0$, and the event horizon at $r=1$. We may consider Earth as being at some $r >> 1$: 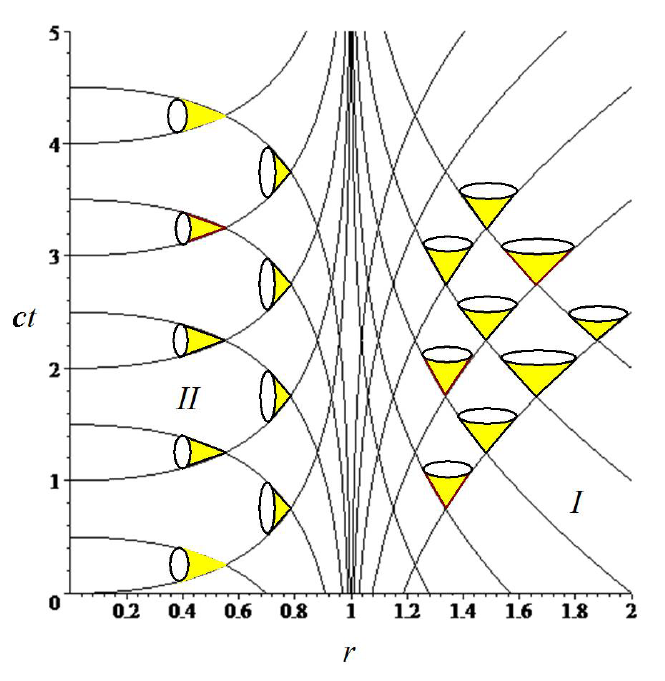 The lines are called null geodesics and indicate the path that rays of light would take. As you can see, it takes light an infinite amount of time to approach the event horizon from the outside. In fact it takes everything an infinite amount of time to get to the event horizon. But there's an important semantic distinction here: when I say time, I'm really referring to the time that we here on Earth measure, denoted by the $t$ coordinate. It has nothing to do with the subjective experience of someone who's actually falling into the black hole. Their measure of time is called proper time and denoted $\tau$. The yellow 'light-cones' contain all trajectories that objects with mass could take. Here they are drawn for an infalling mass.

But there do exist coordinate systems which can map out the trajectory of a mass falling into a black hole. For example, the retarded Eddington-Finkelstein coordinates. Here's a diagram (again taken from George Jaroszkiewicz's lecture notes at the University of Nottingham) of such coordinates applied to a black hole: 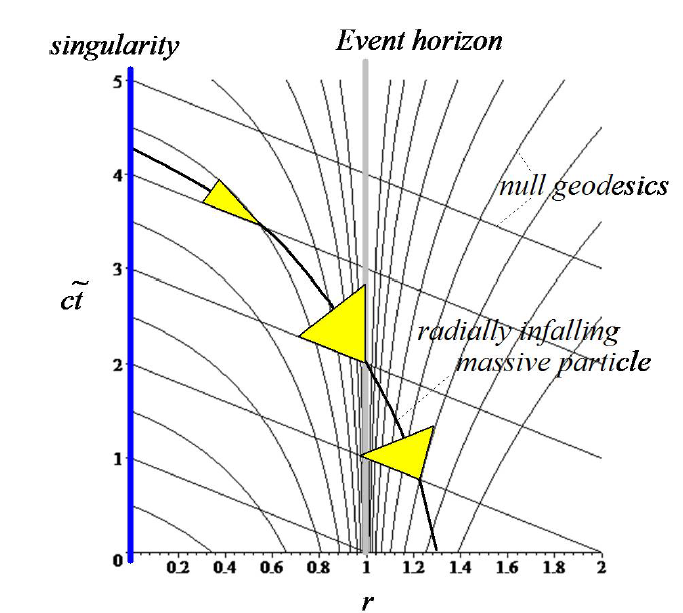 Here's what I want you to take home from this diagram: as the mass falls closer and closer to the event horizon, just before it passes it, follow your eye along the null geodesics leading out from the black hole and toward us at $r \rightarrow \infty$. These lines indicate the path that rays of light follow. No matter how far you advance in our Earthly time coordinate, you are still receiving rays of light from when the rocket ship was falling in-- that moment right before $\tau_{critical}$. Any light emitted by the rocket ship once it passes the event horizon, beyond $\tau_{critical}$, is trapped inside the black hole.

Clasically, nothing can escape a black hole once past the event horizon. Not even information. No matter how much time passes on Earth, we receive information (i.e. light) from the instant just before the rocket passed the event horizon, and none from afterwards. 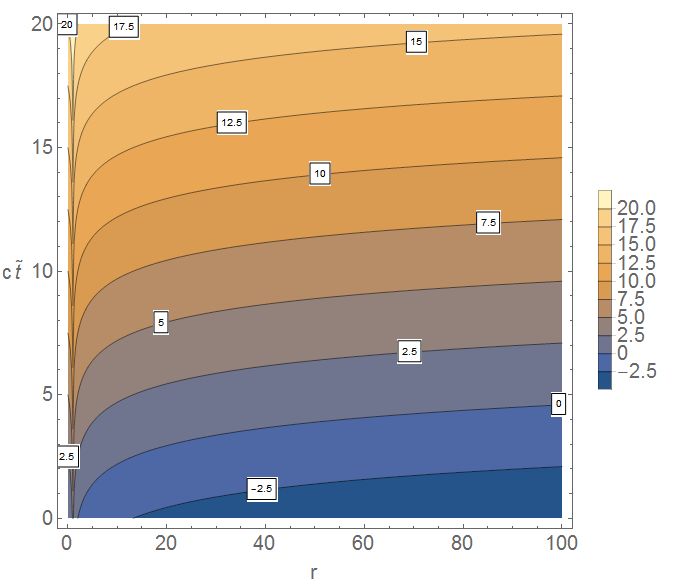 Following the contour lines, you can see the path that light rays take to reach us from the black hole. No matter which contour line you look at, (i.e. no matter what $t$ coordinate; no matter how long we sit and wait) the light rays always originate from some point with $r>1$ because the contours do not pass through the critical $r=1$ event horizon. And so we will always see the rocket as it was just before $\tau_{critical}$.

Proper time is different for stationary far-away observer and the person entering the event horizon of a black hole (let's call him the traveler). As you said, for the observer it takes infinite amount of time to see someone crossing the event horizon (although you will eventually stop seeing the light, or a signal, coming from him because of the huge redshift and decrease of the signal frequency), but for the traveler nothing special happens at the horizon, supposing the black hole is big enough to not tear him apart. His proper time is doing just fine. Horizon singularity is just a coordinate singularity, you can choose other coordinates (see Kruskal-Szerekes coordinates) to get rid of it. The real physical singularity, whatever it really is, is the center of a black hole.

Not the answer you're looking for? Browse other questions tagged general-relativity black-holes time-dilation observers event-horizon or ask your own question.