The SR invariance formula makes space-like intervals imaginary (e.g., the distance $x$ in a given frame has interval $ix$). Yet modern physicists consider it bad form to define the distance itself as $ix$, as Minkowski did. It seems to me that this distinction is trivial—what’s wrong with defining the distance as the value of its interval? An answer to a previous question of mine on this topic referred to a paper by Visser showing that there is a way to do this that can be generalized to GR. So what’s the fuss about? Even if there weren’t such a way, I don’t see how that would invalidate Minkowski’s definition for SR. Since the interval measure is what’s important, what fundamental difference can it make whether one defines the distance as x or as the imaginary interval $ix$?

The whole idea of a LT being an imaginary rotation (important, because phi is additive) depends on the use of the invariant measure, which is the complex length between two points in C2, the space in which complex rotations exist, and so the space in which the x-t plane is being considered to be embedded when we talk of complex rotations. In C2 it can easily be shown that the angle between any two axes, real or imaginary, is a real right angle, and this explains the invariance formula—it is simply the Pythagorean theorem for that complex triangle. So all this ‘invariant interval geometry’ is an integral part of special relativity. If you insist that distances are real and use a Pseudo-Euclidean metric, which would imply entirely different values for these angles, you are throwing out an enormous portion of SR. It is hard to see how that can be billed as an advance in our understanding.

[updated with summary of their argument]

Reasons NOT to use ict:

It is not uncommon for two descriptions in physics to be equivalent while one is preferred. If what you say about extending the $ict$ notion to general relativity is true, then there is no physical reason to prefer one or the other. Both are equivalent. On purely physical grounds, if two theories are isomorphic they're indistinguishable, and so are scientifically invalid. Here are a few counterarguments as for why the four-vector formulation is great: 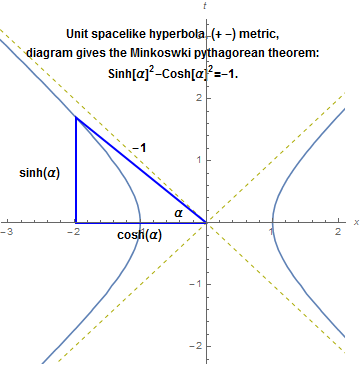 Personally, I think point number two is the most important one.

0
How well does the concept or model of imaginary time work?
-3
Is time intrinsically complex? Does it have an imaginary component?
1
Why the imaginary unit in time axis?
0
Notation on four-vectors using imaginary spacelike components
1
How is a pseudo-Euclidean metric superior to Minkowski's complex metric?
19
Minkowski Metric Signature
10
Is velocity an angle?
11
Special relativity and imaginary coefficient of the time coordinate
0
Imaginary velocity components in geodesic
0
Minkowski product as Euclidean product plus spatial inversions
See more linked questions

6
Is it okay to Wick rotate to give the negative of the Euclidean metric? Also, could we make the space-like coordinates imaginary instead?
10
What is the point of complex fields in classical field theory?
1
Distance formula in Euclidean space vs. Spacetime Interval - why is one Pythagorean and one not?
0
Question about spacetime interval in acceleration in special relativity
2
What is the meaning of complex distances in relativity?
2
What's the meaning of a complex momentum in classical mechanics?
1
How to map a complex plane Mobius transformation to 1+1D Minkowski real plane?