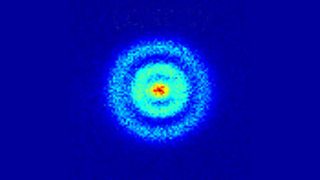 5
What is the experiment used to actually observe the position of the electron in the $\rm H$ atom?