Do liquids have terminal velocities?

Consider a liquid free-falling through a fluid (i.e. dropping the contents of a bucket full of water from a high building). Will it reach a terminal velocity? I know that the terminal velocity of an object depends on the projected area during the fall. Is it possible to calculate what that area would be if the object is a liquid? Would the rest of the terminal velocity equations hold?

Yes. Raindrops reach a terminal velocity of about 10m/s or 20 mph. This varies depending on the size of the drop and atmospheric conditions.

Liquids change their shape as they fall, and also lose mass by evaporating. Contrary to the popular fiction raindrops are not teardrop shaped - ie more streamlined. They are flattened by the opposing forces of gravity and air resistance. If larger than about $\frac14$ inch in diameter they will break up into smaller droplets - see Precipitation Education : Shape of a Raindrop, from which the following diagram is taken : 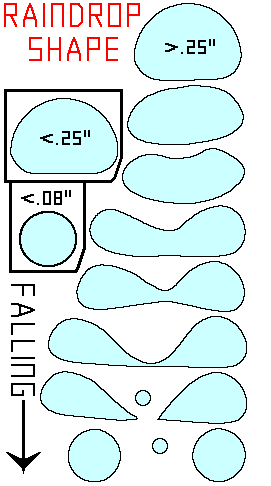 Because of the change of shape, it is very difficult to calculate the terminal velocity of a given volume of liquid. In Terminal velocity of raindrops aloft (Foote and Du Toit, 1968) the authors construct a semi-empirical equation (#7), based on experimental data, theory and computational modelling.

If given sufficient height from which to fall, the bucket of water would gradually break up into smaller and smaller droplets until each was less than $\frac14$ inch in diameter. The larger splashes of water would probably reach a higher speed than the droplets which they eventually become. The terminal velocity would be less than the maximum velocity with which the water falls.

Not the answer you're looking for? Browse other questions tagged newtonian-mechanics fluid-dynamics drag free-fall or ask your own question.