The last time I was on vacation I was drinking on the swimming pool, and after I was finished with the drinks I started playing with the 2 plastic cups I had, and noticed that the air produces a reflection effect with the cups. 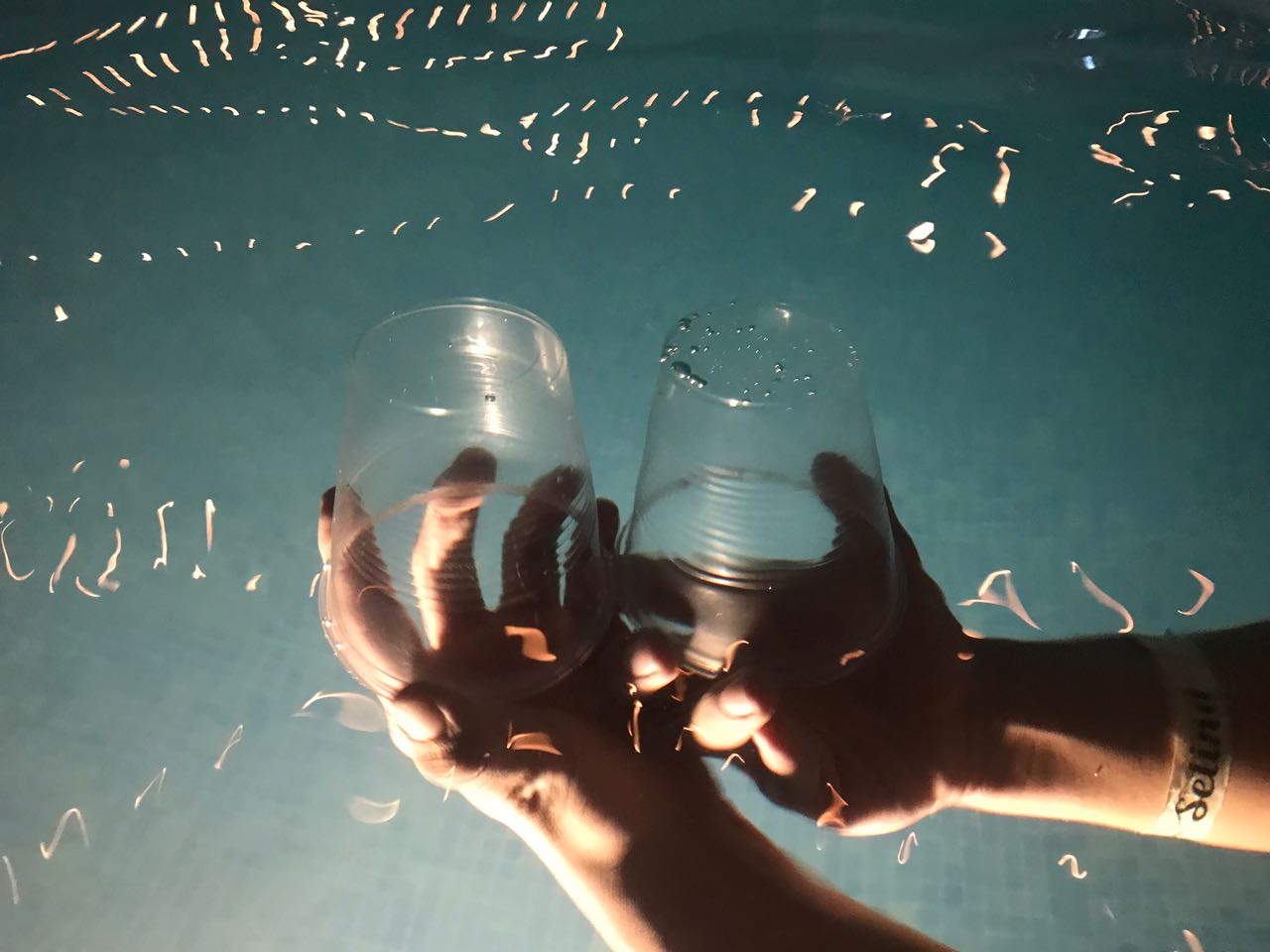 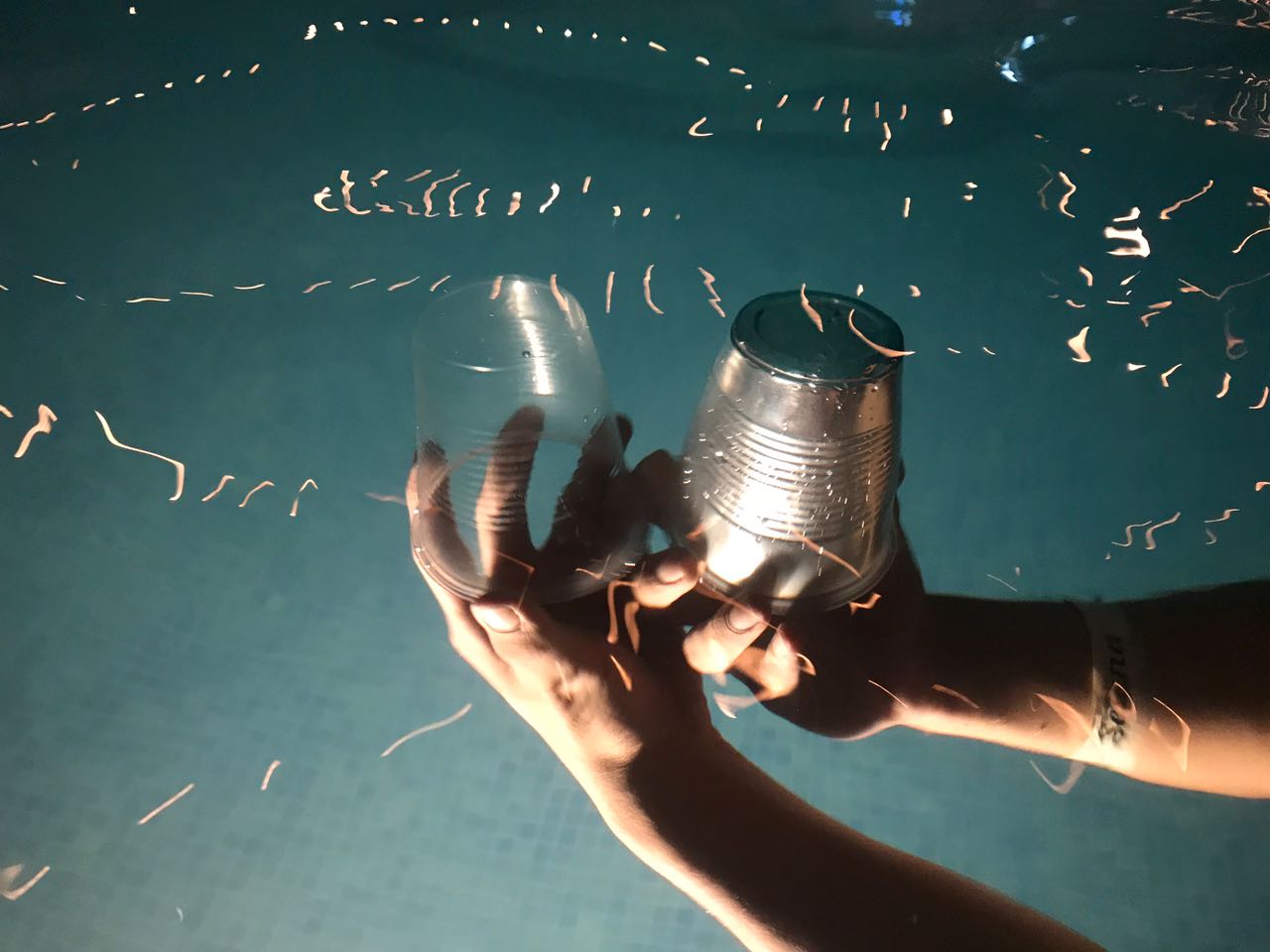 Also, I noticed that this effect was visible only when I was above the surface of the water. When I was under water both cups were completely transparent.

I have to add that most of the light is coming from an underwater light.

I would like to understand why the air produces a difference on how the light is reflected.

I only have a long answer for you, so bear with me.

The long answer depends on an understanding for :

optical density is a property of transparent material (different from normal density) and it's a measure of how fast light goes in said material.

why would light speed vary? light behavior on the microscopic scale is quantized, i.e. light has bits and parts of energy that run around like marbles. This energy in return is controlled by : (this will look familiar I hope)

Now what would these bits of energy do ? They interact with other bits, more precisely here: electrons.

The photons going thru a transparent medium are like that one popular guy in a party who walks in says hi to this grin to that gets high fives and high fives, and by the time he's at the backyard, he has exchanged a good amount of handshakes and body touching with those in his paths AND has taken longer to go there because he keeps on stopping to say hi unlike an invisible introvert who walks between the crowd to the backyard.

Similarly, the electrons going in their paths are met by a transparent material, so they exchange parts of their energy and get them back as they go, this makes them slower.

How would that affect the equation (1)? It won't. We repute it as

Stop here and move to our 2nd :

This is what we call Snell's equation for light refraction.

It has a special case when light moves from medium X to medium Y where $n$ X > $n$ Y.

In this case explained briefly by an image I found :

We're interested in the case of the critical angle, the light falls with an angle greater than it, it no longer refracts or changes its path, it merely reflects in the same medium and doesn't path to the other. (Total internal reflection.)

Now combining the two and finally answering your question.

I first make some assumptions that I will explain one by one :

$n$ of fresh water is given around 1.3 (with some variation here since is this pool water )

$n$ of cup material is more than 1 and slighty, very slightly more than that of water

With one disclaimer here : I'm not sure of the angle at which light fell on in each case so I will guess it roughly as I go from the given.

We've assumed that $n$ cup material is larger than the water so the angle of incidence wouldn't matter here, you haven't experienced any TIR in that case therfore light simply followed snell law. I suppose the refraction is too little to be noticed.

This here is a case of TIR. The light went from the material to air, walked a little in air and faced by cup boundary .. at an angle that's more than the critical angle so it simply went back .. reflected as you said.

Not the answer you're looking for? Browse other questions tagged visible-light water reflection refraction air or ask your own question.

0
Does brown but transparent swimming pool water heat significantly faster than western style highly chlorinated pools?
12
Why is water blue (on a quantum level)
0
Can capilliary action move liquid against gravity?
3
How does infrared light behave through water?
7
Refraction: Swimming goggles, short-sightedness, and underwater vision
1
Why does air get trapped below water pouring into a glass?
4
How does water fill an upside down cup?