How can an antenna pick up thousands of frequencies at the same time?

When we turn the tuning knob of a radio set, we pick up a different station on a different wavelength, yet the (length of the) antenna is the same: we can select any frequency at any time, we focus on any one, but that means that there are electrons are oscillating at all thousands of different frequencies.

My answer here is more about the actual engineering to make an antenna operate efficiently across a wide band of frequencies. I am an amateur (Ham) radio operator and I have been designing and using antennas of various kinds for almost 60 years. So, this is about my antennas and how they are made to work efficiently for both receive and transmit.

As an example, one of my current antennas (I have four antennas in use right now) is an 80-meter dipole that is about 136 feet in length and an average of 55 feet in the air above ground. It is center fed with "ladder-line" transmission line to achieve low-loss. It is copper wire (actually, ordinary #12 house wire).

It is named 80-meter for the principle frequency band of use. This 80-meter band (sometimes the upper end is referred to 75-meter band) is designed for 3.5 MHz to 4.0 MHz operation. However, I use this very same antenna with the 40 meter band (7.0 to 7.3 MHz) and the 30 meter band (10.1 to 10.15 MHz). Technically, it can handle not just thousands but an continuum of frequencies. [Note: the total number of "frequencies" simultaneously used by a given band (e.g. 80) meter band is dependent on the band-with of the signal versus the band with of the antenna. I operate CW mostly (Morse Code) and bandwidth is under 250 Hz. A SSB signal though is roughly 3.0 KHz.]

Antennas can be operated as resonant antennas and also used for non-resonant operation. All AM and FM or even SW receiving-only antennas are non-resonant. Resonance is something that happens at specific frequencies. For example, my 80-meter dipole antenna was designed to be resonant at 3.505 MHz. However, the resonance point of an antenna is affected by a lot of different things such as height over ground, conductivity of ground, nearby conductive structures (metal, trees, etc.). So, often when building an antenna like an 80-meter dipole you purposely make it longer than necessary and then measure the impedance at the desired frequency and then cut or trim the antenna and re-measure until you are close enough. You measure impedance at the antenna feed point because you want the reactive portion ($X$) of the complex impedance of $R+j X$ to be zero ideally.

So, there is one resonant frequency to the antenna but I use it for a wide range of frequencies. The result of operating off of the antenna resonant frequency (below or above) means that the impedance is different and often it is a very bad mismatch to the rest of the equipment. This mismatch in impedance means that losses in the system (mostly in the transmission line) are increased and usually to such amounts that it is worthless as an antenna.

To fix this problem, the antenna is coupled via an LC circuit that is tunable. This tunable circuit is often referred to as an "antenna tuner" but it comes by a variety of names. For example, many of the old SWL receivers included a variable capacitor (sometimes inductor) called "Antenna Trimmer" and by turning this inductor knob you could strengthen signals by getting a closer match in the impedance to the antenna circuit. My antenna tuner is more sophisticated and automatic (I don't need to turn any knobs) with built-in processors (Elecraft KAT500). However, mine is designed to handle a transmitted signal as well as a received signal.

For receiving, antennas can be mismatched and the only bad outcome is a more poor signal or maybe the signal is not even above the noise level as a result. But, for transmitting, a mismatch in the impedance results in standing waves on the transmission line which can result in great losses but also in high-voltages where the transmission line connected to the transceiver. With solid-state equipment, these high-voltages can damage the equipment so they are to be avoided. Indeed, the modern solid-state transceiver has built in circuitry to continuously measure and automatically back off on transmitted power (even to the point of shutting down transmission) until the danger is alleviated.

The key measure is called the Standing Wave Ratio and ideally you want this ratio to be as close to $1:1$ as possible. On my 80-meter antenna, the resonant point on the antenna still has a high-SWR because the resonant resistance is near 70 ohms but I am feeding that antenna with 450-ohm transmission line (ladder-line) and this transforms the impedance I see at the transceiver is something quite different from the resonant antenna feed point resulting in a mismatch SWR of about $5.6:1$ and this should be less than $2:1$ as above $2:1$ the transmitter cuts back power more and more until at $3:1$ the transmit function is switched off.

Making antennas work efficiently for both receive and transmit on multiple frequencies and even multiple bands of frequencies is a big part of the hobby of ham radio. There is probably more lore and written material, both correct and incorrect, on ham radio antennas than any other part of the hobby. HF radio antennas is not plug-and-play, lots of engineering design and other technology comes to play to make it work.

The free electrons in an antenna are undergoing forced oscillations, the forcing being done by the electromagnetic waves.
With lots of incoming frequencies the motion of an individual free electron is very complex.

Connect a wire to the input of an oscilloscope, turn up the gain and look at the "junk" that the wire is picking up which will probably include $50\,\rm Hz$ or $50\,\rm Hz$ from the mains supply, signals from badly suppressed electrical equipment, radio and tv stations etc.

The response of the electrons to the incoming electromagnet waves depends on many factor with the physical dimensions of the antenna being one of them.
A simple dipole will have a strong response to electromagnetic waves whose wavelength is approximately two times the total length of the dipole as then system is close to resonance and the response (movement) of the electrons in the antenna is comparatively large.
A standing wave is set up in the antenna. 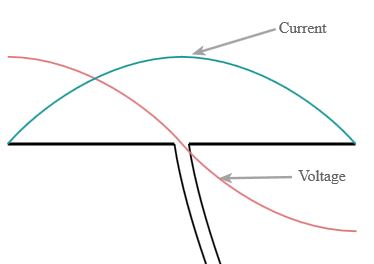 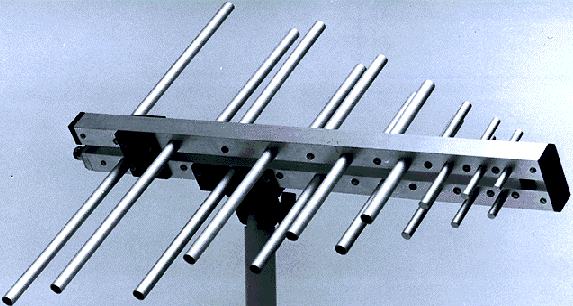 A mobile phone has a number of different antennas to pick the various frequency signals carrying the data.
These antennas are needed because the incoming signals are relatively weak and they may look just like a piece of wire but there is much more than that to their design 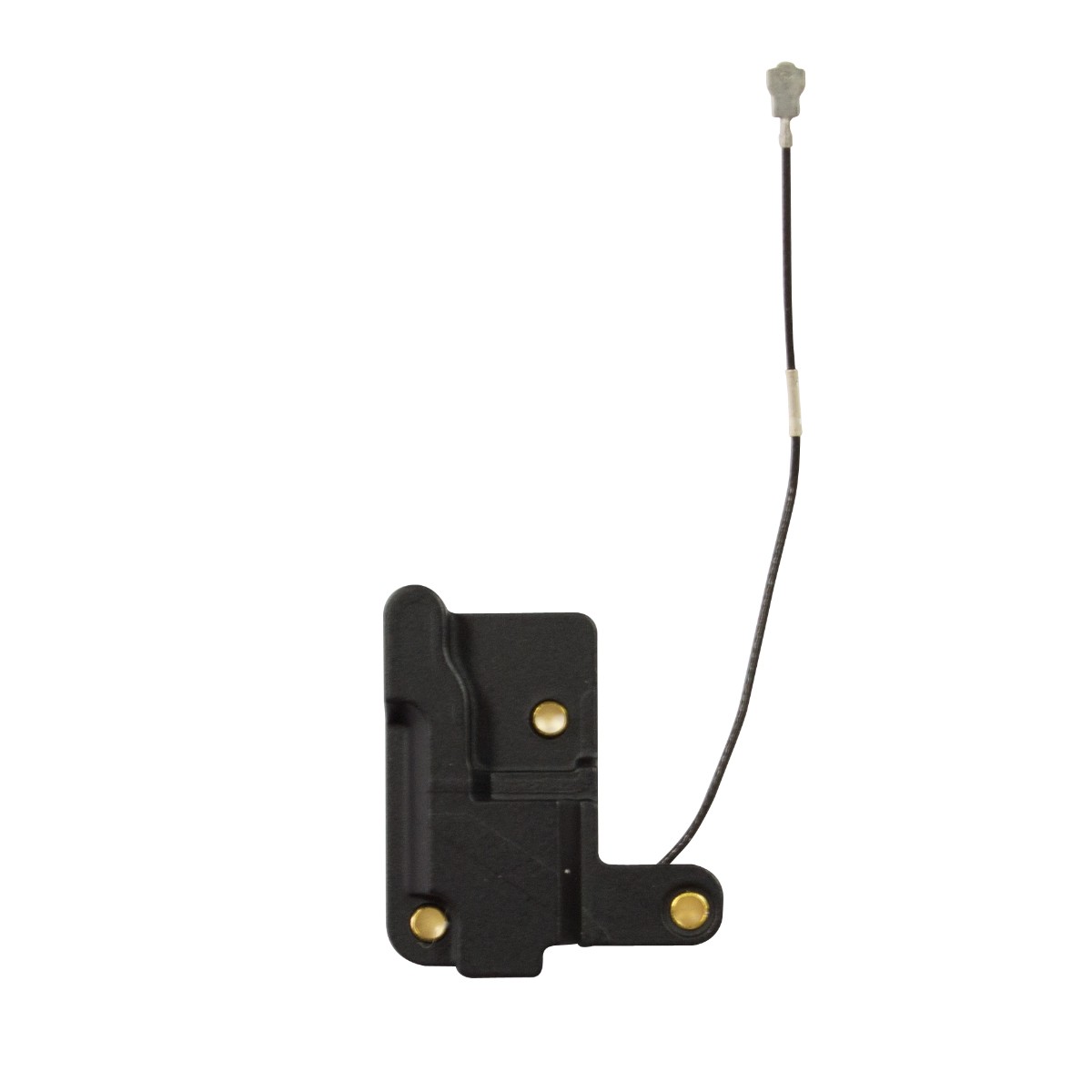 If the incoming signal is relatively strong then the need for a good antenna is diminished and a "length of wire" will do.

The signal (alternating current) is then sent to the front end of the receiver where there is a resonant (LCR) circuit which is set to produce the biggest output from a well defined range of incoming frequencies.
When you tune your radio you are changing the resonant frequency of that circuit.
So you have selected the frequency of your particular radio station and hopefully abandoned all the other signals at frequencies which you do not want.

The problem of superimposed waves or oscillations is an extremely common one in physics. Fortunately, there's a well-established way to deal with it.

When a single frequency is being broadcast, here is what the wave looks like: 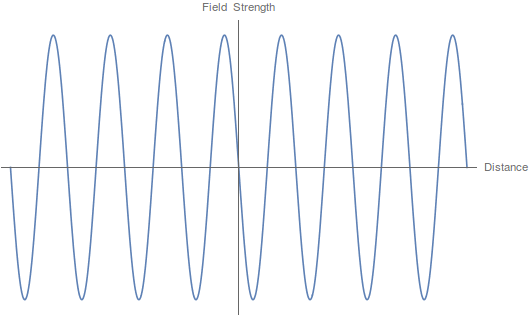 When we combine multiple frequencies, it starts looking a bit more warped: 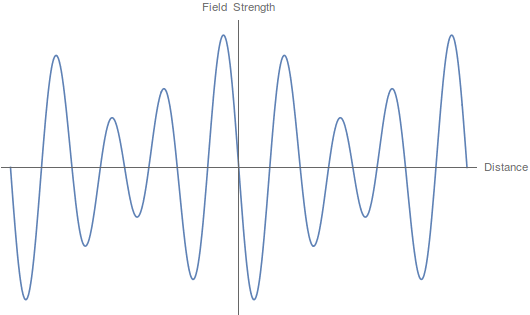 Without asking which signals were broadcast, it is possible to tell from the above diagram exactly which frequencies were sent via a mathematical transform called the Fourier Transform. Well, if I gave the scale for "Distance" anyway. I've omitted it for simplicity.

Motion of Electrons in a Dipole Antenna

The motion of electrons in a conductor under the influence of a field is not as simple as 'waving' back and forth. For one thing, the electrons in a metal are delocalised, and do not even have well defined positions (queue quantum mechanics). However, for the sake of visualisation, I'll model the current going through a dipole antenna under a radio broadcast and assume that each electron is moving back and forth at the net rate of current. In reality, electrons in a metal are flowing all over the place, almost like a liquid.

Here is what the current looks like (with the 'toy model' of electron movement) for the first signal I showed you at the beginning:

At the edges of the antenna, there is no current flow, whereas toward the center the current flow increases. In this diagram, there's a net current flowing out of (and into) the center of the antenna. This is where you would attach an amplifier to sense the 'pulling' and 'pushing' of electrons into and out of it, turning it into an electrical signal. More on that later.

Now here's the same toy model for the second signal I showed you consisting of two radio frequencies at once (sped up somewhat):

Watch the electrons carefully. You can see that they don't simply cycle back and forth. Their motion is a bit more complicated-- the amplitude of their oscillation changes with time. This reflects the second signal I showed earlier.

I'm unsure exactly how this is accomplished, but I'll give my best guess. As you can see from the current diagrams above, there is a discontinuity. That's where charge (electrons) is accumulating. If we attach a capacitor there, it will soak up and discharge current as necessary. One leg to each side of the antenna. Across the legs of this capacitor, there will be voltage difference. It is a routine procedure to then hook up an operational amplifier to amplify (or attenuate) this voltage difference to amounts that computers, microchips etc. deal with; i.e. about 5V.

Here is what the capacitor voltages look like for the first and second signals respectively:

Again, from these voltage graphs, one can determine the frequencies present. In the first diagram, it's a simple sine wave because there was only one frequency. To decode the capacitor voltage into the frequencies that were sent, we have to do something more complex than a Fourier Transform I think, though I'm not sure what that is. But hopefully you can see that in principle, the information is there to distinguish between several frequencies.

5
How does the movement of electrons produce radio waves?
1
How is information transmitted by radio waves (how radios work)?
4
How far do electrons go in an antenna?
0
Identify the frequency antenna I can't access
4
How do antennas work?
12
How does the human body affect radio reception?
1
Why is the half-wave dipole the most used antenna design?
1
Can EM (radio) wave oscillation interact with an antenna without photon absorption?
2
What is the explanation behind radio shadowing by people?
1
Quantum description of radio antenna