This is a bit of a long-standing question / bone of contention that I've seen floating around, and which I would like to ask here in the hopes of getting some outside perspectives from a broader community.

My neck of the woods centers around pulsed lasers: these can be long or short pulses, at a variety of wavelengths, but in essence we always have some light source which produces radiation that is focused down into some interaction region so that it can do things to atoms or molecules or whatnot. And, in this community, there is a bit of folklore that essentially says something like

You cannot have nonzero-area pulses

where a nonzero-area pulse is a pulse of radiation with electric field $\mathbf E(\mathbf r,t)$ with the property that $$ \int_{t_\mathrm{i}}^{t_\mathrm{f}} \mathbf E(\mathbf r,t)\mathrm dt \neq 0, $$ where $t_\mathrm{i}$ and $t_\mathrm{f}$ are pulses well before, and well after, the pulse has started and finished, respectively, and the integral is taken at some fixed position in space in your interaction region, i.e. in the radiation regime kind of far away from the charges and currents that make up the light source that produces that electric field.

This principle has a pretty wide applicability, because it impacts what kinds of vector potentials are of interest: since we normally define the vector potential as $\mathbf A(\mathbf r,t) = -\int_{t_\mathrm{i}}^t \mathbf E(\mathbf r,\tau)\mathrm d\tau$, if all pulses must have zero area then you should only work with vector potentials that go to zero at $t\to\infty$. This is nice because it simplifies things, but it also restricts the kinds of pulses you might hope to shine on your target, if you want to do something like attosecond streaking or whatnot.

Unfortunately, however, this bit of folklore is very rarely backed up with any kind of solid justification (even in e.g. course notes from researchers that I hold in very high regard), and as I will argue below it is on very shaky ground. I would like some help establishing whether it is true or not.

On the justifications front, a friend recently found a resource that offers some foundations for this principle, in the book chapter

from which the relevant passage runs as follows:

An interesting feature of a travelling electromagnetic wave is that it must have equal amounts of positive and negative field, meaning the shortest optical pulse that could be generated would be one full cycle. It is not possible to generate and transmit a unipolar electromagnetic pulse that consists of only 1/2 cycle. A plot of both cases is shown in fig. 3. 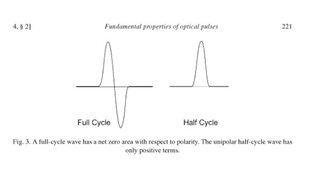 This can be easily understood from the Fourier analysis of the propagating wave. The Fourier spectrum of a propagating unipolar pulse (right-hand side of fig. 3) will have a DC term. To launch a unipolar pulse, it would be necessary to transmit a transverse DC potential with the rest of the waves. But it is impossible to establish a transverse DC potential in space, thus it is impossible to create such a pulse.

Because no propagating wave can have a DC component, pulses must have equal amounts of positive and negative field. Propagating fields will always have an oscillatory structure with at least one cycle. Another way to look at this is to recognize that all physically realizable pulses must have an average area of zero - i.e. there is just as much negative as positive field in a total optical pulse.

This is, then, a formal appearance of the principle in the literature - and in a resource that otherwise looks pretty solid, too -, but I find it deeply problematic. My problems are most easily condensed around the phrase

because there is no such thing as a 'transverse DC potential', since DC fields don't have a propagation and the notion of 'transverse' is therefore meaningless. More generally, I'm really troubled by the mixture of a Fourier decomposition (which looks at the whole experiment globally, i.e. you need to treat the entire time interval as a unified whole for the analysis to make sense) with talk of 'launching' those Fourier components.

More practically, though, I find this very weird because it is possible to exhibit radiative solutions of the Maxwell equations that include zero-area pulses, at least in the plane-wave regime.

As you can see, then, there is some significant tension here. Are CR Pollock's arguments simply not applicable to the example above? Or is Pollock's argument just completely flawed and the zero-area principle is not true at all?

On the other hand, though, the passage above does suggest that my plane-wave counter-example is not quite strong enough, because it requires infinite energy and an extended source, so really one should find examples of pulses with finite energy and localized fields, and find explicit sources that will produce them (to really defuse the "you can't 'launch' the DC component of those fields" argument).

And, on the opposite end of the spectrum, the focus on the pulse area as a DC component also raises some interesting flags, because normally we like to work in the paraxial approximation to describe the focusing of a laser beam, but those DC components are very much not describable by those dynamics. Indeed, in the paraxial approximation, the Gouy phase shift of $\pi$ over the focus suggests that if you manage to make a cosine-like pulse before the focus, then it will become a minus-cosine-like pulse after the focus, and that is some pretty odd behaviour when seen through the lens of a DC-like field.

A bit more on the practical and experimental side, we're getting close to the point where we can reliably and consistently produce and measure pulses that look like part (c) of this figure (from this paper), where you really start to concentrate the energy in the central half-cycle of the pulse, tilting the pulse area towards a positive balance. Now, you can argue that the area of the central pulse must always be balanced to zero by all the little negative bits in the leading and trailing edges of the pulse, but frankly I find that perspective on the argument to look very weak.

Which brings me, then, to the formal statement of my question. I've ranted a bit to show the tensions between multiple different statements, facts, and perspectives, and the resolution doesn't look that easy to me. The way I see it, what's required is either

On the other hand, this isn't quite rocket science, either, so hopefully there are already better explorations of this topic in the literature. Has anyone seen such a text? Or if not, can someone show conclusively, as above that the principle is true or false?

This is indeed a somewhat tricky question. It is related to the issue of laser vacuum acceleration of charges, which is generally believed to be impossible - a claim that goes under the name of Lawson-Woodward theorem. There has been a bit of a discussion a while ago in PRL, see the paper

who claim to have found unipolar sub-cycle pulses that can be used for electron acceleration. This has been criticised in an interesting comment on that paper at

which I consider to be both relevant and correct. It is certainly true that unipolar, pulsed plane wave solutions to the 3d wave equation exist mathematically (see e.g. OP), but they do not have finite energy and/or cannot be generated by a source of finite extent as Kim et al. point out (with a reference to Feynman). Put differently, this implies that the question indeed cannot be answered in a physically sensible way without considering the generation of the pulse, i.e. its source together with the realisation of the latter.

This is indeed a highly topical issue. Consider research papers such as

which tend to support the notion that unipolar radiation is indeed achievable.

an actual solid proof of the zero-area principle, with none of the fuzzy language in Pollock's passage, which explicitly delimits its validity and its hypotheses, and where the proof and its validity limits clearly show why it is not applicable to the plane-wave example I posted above.

I'll comment on this; I'm reluctant to call the following a solid proof but it can at least be an input for discussion.
I'll use rationalized Gauss units so I'll be missing some $c,\mu_0,\epsilon_0$ factors.

But we already knew something like this, you wrote it yourself that the area is proportional to the potential $A$ ( this formula here can be made more similar to yours using that $\textbf{E}= \textbf{$n \times n \times\dot A$ } $ in lorenz gauge and radiative limit). But we see also two conditions that make our area vanish. We need:

Then by using (*) to evaluate the potentials in the expression for the area, they turn out zero because the currents that source them are zero when calculated at those times $t_{i,f}-r +\frac{\textbf{x$\cdot$y}}{r}$.

This is compatible with your example; your source stays "on" for all times, thus assumption #2 is not satisfied.

One could argue that this was just the $\mathcal{O}(1/r)$ order. This is true, I was focusing only on the radiation fields.
One could also argue that it's assumtpion #2 that does all the work; it does, but it sounds reasonable. It means, in my interpretation, that we have to integrate for a time large enough to see the entire pulse.
Moreover, by removing #2, one could get all kinds of behaviour. You already gave an example of a source that gives positive area; one could instead choose a periodic source that gives zero area.
This last paragraph explains why I was reluctant to call this a solid proof; you can say that it is more of an extended comment on what kind of sources give zero area pulses.

Edit: following Emilio's comment, we'd like to remove the requirement that $j^0$ must vanish. Luckily there's a wave relation that helps us.
In the radiative limit and in the Lorenz gauge $\textbf{E}= \textbf{$n \times n \times\dot A$ } $. We remember from (*) that $\textbf{A}$ depends only on the spatial components of the source $\textbf{j}$. Putting the two facts together in the expression for the area $\int \textbf{E} \,dt= \textbf{n $\times$ n $\times$ }[ \textbf{A}]^{t_f}_{t_i} $ we get that only $\textbf{j}$ is required to vanish in order to get zero area.

Not the answer you're looking for? Browse other questions tagged electromagnetism waves electromagnetic-radiation laser or ask your own question.