Why is the speed of sound a quantity of interest in nuclear astrophysics?

According to E. Chabanat et al. (1997), the speed of sound in a nuclear medium is defined as

The speed of sound is an important property of an equation of state (EoS): depending on the setting for various reasons.

In the context of neutron star (NS)/ nuclear EoS the speed of sound is a measure of stiffness of an EoS: a stiff EoS (an EoS with a high sound velocity) generates a high pressure at given energy density. In order to allow for massive ($M>M_\odot$) NS the EoS needs to be rather stiff: to form massive compact objects the EoS needs to be able to generate large pressures to compensate for the strong gravitational attraction. Lets consider a very simple EoS: an EoS with a constant speed of sound $c_s$: $$\epsilon=\frac{P}{c_s^2}+\epsilon_0 \Longleftrightarrow \frac{d P}{d\epsilon}=c_s^2.$$ I use geometrized units with $c=G=1$ in which the speed of sound is dimensionless and measured in fractions of the speed of sound $c$ so $c_s=1/3$ in SI units is $\sim 10^8 \mathrm{m s^{-1}}$.

The following figure shows mass-radius and mass-central pressure curves for three different EoS. The data points of this figure correspond to solutions of the general relativistic structure equations of hydrostatic equilibrium (TOV equations). I matched those constant speed of sound EoS to a realistic low density curst EoS to get NS with realistic radii. 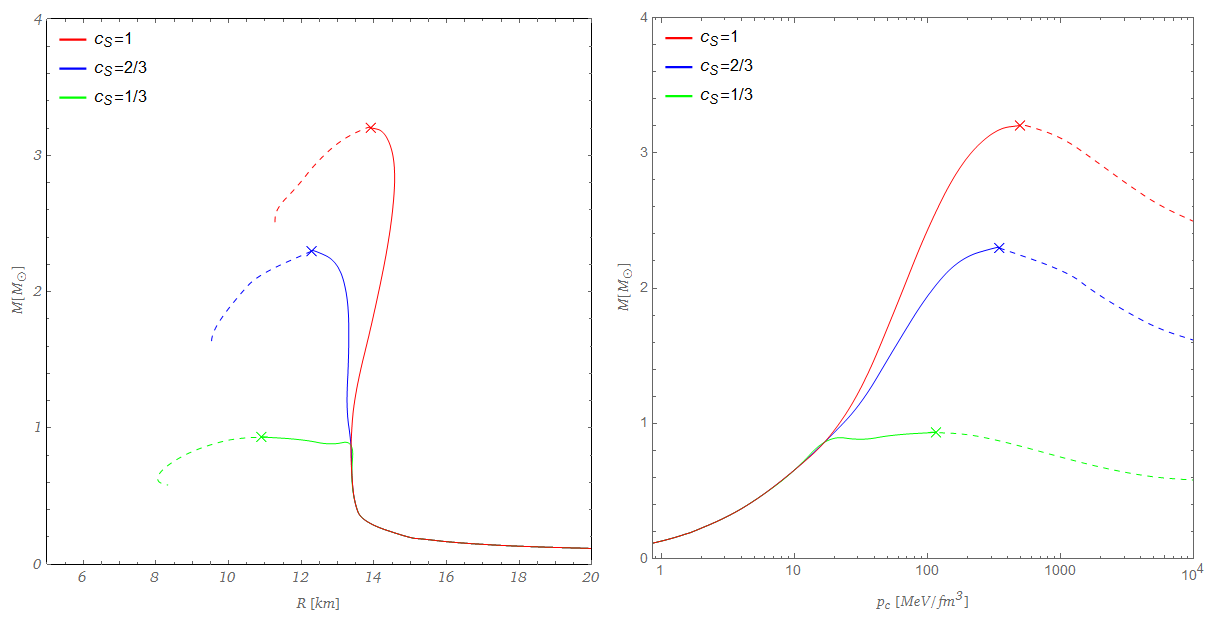 The crosses denote the maximum mass obtainable with the respective EoS and the dotted lines are unstable configurations. So we can clearly see that we need very stiff/high sound velocity EoS to get stable stars with masses above $2M_\odot$. The red line corresponds to NS with an EoS at the causal limit $c_s=1$. With such a stiff EoS we can get stable NS with masses up to $\sim 3.2 M_\odot$.

A realistic NS EoS for the high density regime needs to be rather stiff to allow for $2M_\odot$ NS but it also needs to be causal so $c_s<1$. For most purely nuclear EoS the speed of sound is not constant but density dependent.

So far I only talked about the impact of the sound speed on masses and radii of NS but it is also important for many other things: Deformability, dynamic stability, quakes, transport properties all strongly depend on the EoS and its speed of sound. It is also a quite interesting parameter for Quark matter EoS and hybrid NS (NS containing hadronic and Quark matter). Maybe one short note on this: the asymptotic freedom of QCD suggest that Quark matter at very high densities behaves like a free ultra relativistic gas with a constant speed of sound of $c_s^2=1/3$.

In terms of a derivation of the expression for $c_s$: it can be derived from the relativistic Euler equation $\nabla_\mu T^{\mu\nu}=0$ and the continuity equation projected into the fluid rest frame. [S. Yoshida, 2011, Dummy’s note (5): Sound speed in relativistic fluid] gives a short derivation of the expression for the speed of sound an the corresponding wave equation.

Not the answer you're looking for? Browse other questions tagged nuclear-physics astrophysics acoustics neutron-stars or ask your own question.

12
How does one derive the equation for the speed of sound?