I'm ok with a simple conductor carrying a current fully enclosed by the integration path: 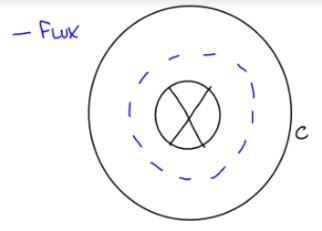 However, say for example there was a permanent magnet in the vicinity of the conductor so there is more flux present than just that from the current, wouldn't Ampere's law effectively say there was more current present than there actually is?

What is called Ampere's Law is the integral form of the 1st Maxwell equation: $$\text{curl} \textbf{H} = \textbf{J} \tag{1}\label{1}$$ Using Stokes's theorem for the vector differential operator $\text{curl}$ Maxwell's 1st differential law is shown to be the same as the integral form, ie., Ampere's law: $$\oint_\mathcal{L} \textbf{H}\cdot \textbf{dl} = \int_\mathcal{A} \textbf{J}\cdot \textbf{da} \tag{2}\label{2}$$ Here $\mathcal{L}$ is any simple closed loop in 3-space that is a boundary to some simple smooth surface $\mathcal{A}$ whose elementary line element $\textbf{dl}$ or surface element $\textbf{da}$ are assigned a vector that is proportional with the loop's tangent or the surface's outward normal, respectively.

The equivalence of the differential and integral forms, $\eqref{1}$ and $\eqref{2}$, is to be understood as being analogous to the fundamental theorem of calculus: differentiation and integration are dual operation of each other where one describes a local the other a global property of the function (field).

and you can see that if you select an integrating loop $\mathcal{L}$ bounding a surface $\mathcal{A}$ through which only true current flows, ie., $\textbf{J}_b = 0$ you only have the contribution of the true currents in the integral, $\oint_\mathcal{L} \textbf{H}\cdot \textbf{dl} = \int_\mathcal{A} \textbf{J}_c\cdot \textbf{da}$. This does not mean that $\textbf{H}$ is the same with or without the bounded currents, instead when the magnet is brought in the field changes so that contour integral stay the same if its surface does not cross the permanent magnet that is the source of the bounded currents.

Permanent magnets are usually accounted for in Amperes law as:

$\theta_{PM}$ is the scalar magnetic potential, which is expressed in Ampere (think of ot as equivalent current)

$B_R$ is the remanence flux density of the PM (flux density at zero field, the thing that makes a magnet permanent)

This is the case if the PM is colinear to the path you want to look at with Amperes law. If the magnet isn't colinear, you can approximately solve your problem by taking $\vec B_{R} \cdot \vec l_{path}$ (dot product) in the upper equation instead of their scalar values.

Important note: when you create a path in Amperes law you may not ommit the magnet length even though it is a source.

6
Ampere's circuital law for finite current carrying wire
5
Ampere's law of circular path when "bulging" out
4
Creating permanent magnets with minimal resources?
2
Applying Ampere's Law for two parallel wires
0
Use of Ampere's law in case of a finite wire
0
Electromagnetism Ampere's law Application to solenoid
1
Which provides the energy for induced current at the starting moment of the lenz's law
5
Faraday's Law Similarities to Ampere's Law