How does one measure anti-neutrino flavor oscillation probabilities?

It is worth noting that the first unambiguous observation of neutrino interactions was of reactor anti-neutrinos.

But so far the available data simply isn't precise enough to detect a difference between matter-type and antimatter-type neutrino oscillation parameters.. This is something that the community has been building up to for some time. I think the smart money right now is on NO$\nu$A, and if they have some unexpected problem DUNE will be along to lend a hand.

One of the interesting issues is that some of the data has good resolution in $\Delta m$ and poor resolution in $\theta$ and other data sets turn that around. If you combine them under the assumption of CP symmetry then you get a good overall result, but of course that won't tell you that if CP is violated. Here's a figure from a KamLAND paper showing how this works: 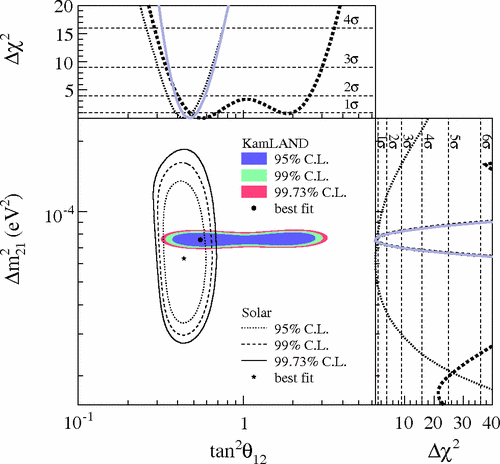 Not the answer you're looking for? Browse other questions tagged particle-physics standard-model neutrinos beyond-the-standard-model cp-violation or ask your own question.

37
Why was the first discovered neutrino an anti-neutrino?
14
How are neutrino beams emitted at CERN?
4
Solar neutrino predictions
2
How to observe neutrinos?

7
Quark mixing vs neutrino mixing, mass eigenstates, weak states and detection
1
Measurement of Solar and other neutrino Mixing angles
3
Current experimental evidence of lepton flavour violation other than neutrino oscillation
2
Can experiments measure the Majorana phases?
1
About the asymmetry of baryons
1
Why is it so important to measure CP violation in the lepton sector?
0
Can the CKM matrix supply the CP asymmetry as required by baryogenesis, in principle?