How did Rutherford conclude that most of the mass (as well as the positive charge) was concentrated in the nucleus?

How did the distribution of the mass matter after all? Given that the electric force is greater than the gravitational force by many magnitudes, the force between the positice charge and the electrons was predominantly electric.

So how did Rutherford conclude that most of the mass is in the nucleus?

This is a good example of how Science works.

If one considers a particle of mass $m$ and initial velocity $v_1$ striking a target of mass $m'$ at rest, without changing its direction, then its final velocity $v_2$ can assume two possible values, $$v_2=v_1,\quad\mathrm{or}\quad v_2=-v_1\left(\frac{m'-m}{m'+m}\right).$$ The second solution gives that backscattering is only possible if the target has greater mass than the incident particle. By the time, the mass of the electron was known to be much smaller than the mass of the alpha particle so a backscattering event would imply that the scattering centers were in fact heavy positive nuclei. And indeed those scatterings were observed.

To formally check this, Rutherford obtained a formula for the number of scattered particles as a function of the scattering angle using the hypothesis of heavy nuclei (which is justified by the above paragraph). Geiger and Marsden did the experiment and the data agreed with Rutherford formula.

Wikipedia explains this rather well but I'll pick out the relevant stuff for you.

Before the Geiger–Marsden experiment, the general idea was that atoms were built of some permeable positive substrate in which some negative particles were floating around; the so called plum-pudding model.

If we shoot $\alpha$ particles on this setup they should all pass through the atoms since the positive substrate is thought to be permeable! (left side of the figure)

But when people did the experiment they saw that most particles went through while some scattered $180^\circ$ backwards, some even bent a small angle! (right side of the figure) 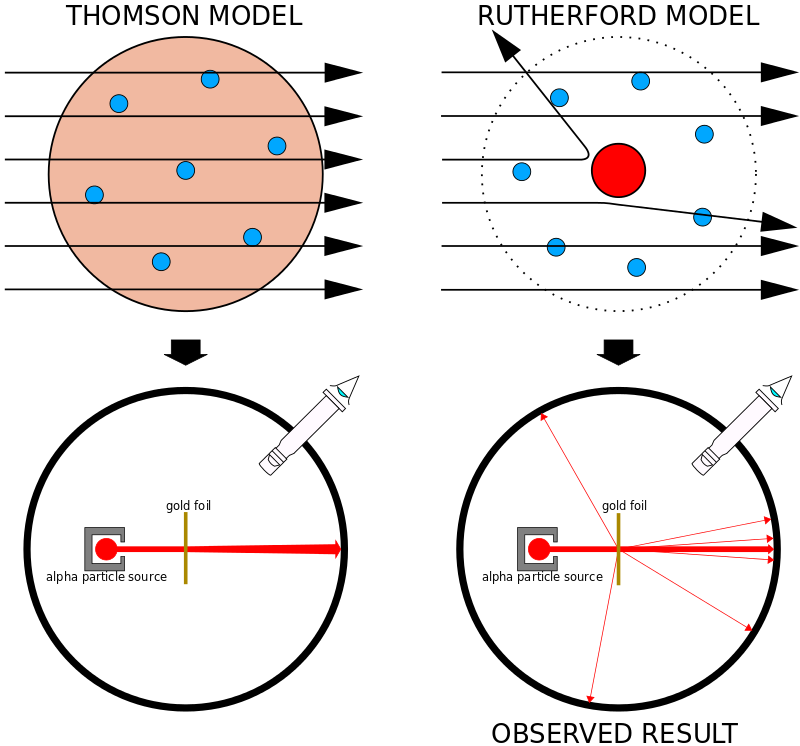 This leads to a model in which most of the mass (to which $\alpha$ particles can scatter) are in the center of the atom with the negative charges around it!

Rutherford performed a series of experiments where he measured back scattering of $\alpha$ particles a function of thickness of metal foil. In the third part of the experiment he observed that around 1 in 8000 $\alpha$ particles were able to back scatter. This was possible only if it encountered large Electric field. Such large electric field can't be created by distributed charge, but has to be created by some concentrated charge. So this explains the concept of nucleus.

Not the answer you're looking for? Browse other questions tagged experimental-physics mass nuclear-physics scattering atoms or ask your own question.

0
Rutherford scattering in Quantum Mechanics terms?
1
In Rutherfords Gold Foil Experiment, Did Alpha Particles Bounce Upwards?
1
In the Rutherford scattering experiment, does increasing the mass (with constant charge) of the nucleus affect the deflection?
4
Rutherford/Geiger–Marsden gold foil experiment: what did they really think about alpha particles?
1
How did Rutherford conclude that most of the mass distribution was concentrated in a central nucleus?
1
Can an alpha particle (or any charged particle) can penetrate through nucleus of gold atom?
3
How to measure the mass of alpha particle?
0
How did Rutherford conclude that the electrons orbited the nucleus in his planetary model? And another way to explain the mass was mostly in nucleus?
22
As there is no specific boundary of an atom, how was Rutherford able to estimate the size of an atom?