What is the physical meaning of diffusion coefficient?

Diffusion is a stochastic process where a single particle can move in each direction with the same probability. Another description of the diffusion coefficient is the following equation:

Let stick to your example of the people running around in the street.

If all people are running in the same direction, then this would be convection, and not diffusion.

Suppose you have a large room, with 100 guys running around in random directions. If you give them a random initial position somewhere in the room, not a lot will change. Except that each man will be at a different location the next time you look.

Now suppose you let all the guys starting at the left side of the room. You're standing with your back to the wall, exactly in the middle. Initially, you will, every once in a while, see a guy passing your line of sight from left to right. No man will cross from right to left, because there is no one at the right hand side. At some point, there will be that many guys on the right hand side, that you will also see man running from right to left, until, at some point, you will not see any difference between left and right.

This is basically the physical concept behind diffusion. If you replace the man by molecules, you get a gas or liquid. These molecules also have some random velocity and direction.

The diffusion coefficient $D$ is a constant relating the spreading $\left\langle x^{2}\right\rangle$ and the time $t$ it spread out. This relation can be clear seen in the diffusion of a single point source as follow.

Therefore, it clearly implies that the grow of the width square $\left\langle x^{2}\right\rangle$ of the Gaussian is linear proportional to the time $t$, with rate given by $2D$. 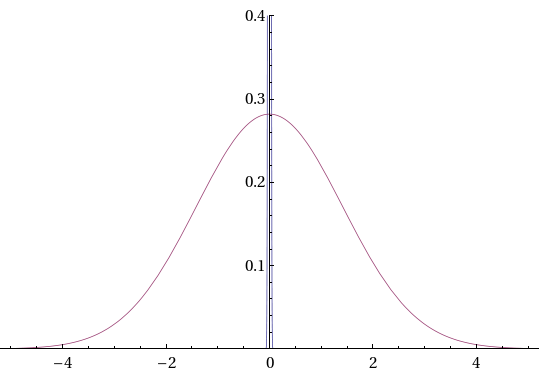 The $x_{rms}=\sqrt{\left\langle x^{2}\right\rangle}$ defines a length scale of the spreading. If we have another length scale $\ell$, we would expect that when $x_{rms}\gg\ell$ or $Dt \gg \ell^2/2$, then the system behaviour is the same as a single Gaussian with the only one length scale $x_{rms}$.

The result is shown in the Fig. 2. When the time increase, those two peaks spread out and eventually merge into one when time is large enough. After a long time, the solution can be described approximately by: $$ u(x,t) \approx K(x,t,0) \tag{7}$$ 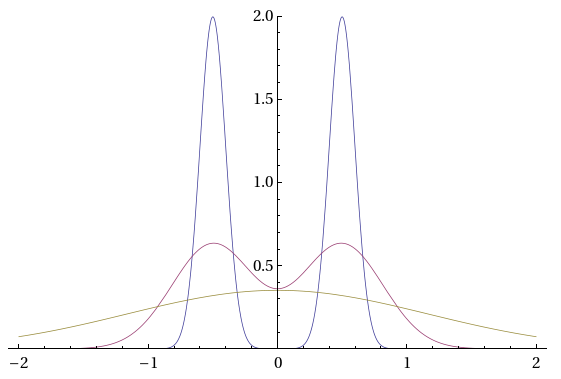 My mama taught me when you find something you’ve been looking for, you put it back in the first place you looked. Hence, Google-catalyzed question necromancy.

grams flux per second for each change in concentration per centimeter.

Which I don’t like, let’s talk about the inverse of D.

Change in concentration per centimeter for each gram flux per second.

Water vapor’s D in 25 C air is 0.282 cm2/s. We’re watching one square centimeter that we’re absolutely fascinated with. We’re also studying the inverse of D, so:

Take these out and the rest of the unit for the non-inverted D is g/ua per g/mL, where ua is the incredibly rare microare, as in hectare. Without the per-second to make sense of it, it’s hard to imagine what grams per microare are. So let’s be crazy and go American:

pounds per square inch for each pound per cubic inch.

PSI is an obvious unit for pressure, and as long as we’re being crazy, g/mL is a unit for density Yes, I realize that a pound of weight is not a pound of mass, especially for gases outside STP, but I don’t think it hurts at all to think of diffusion as what happens after you stop holding back the pressure a fluid of a given density exerts on a given area.

Now back to sanity. We have g/cm2 per g/cm3. Dimensional analysis cancels it out to the second length unit. What is it? A scaling factor, because cubes go up with the cube and squares go up with the square, which is an ever growing ratio.

If the concentration is 1g/cc, and I convert it to 1000000g/m3, then the polite thing to do is to convert the flux from 1g/cm2 to 10000g/m2, which changes the ratio of density to pressure 100-fold, and subsequently the value of D in these units.

If a substance with a given ratio of diffusion density to diffusion pressure is let go, what does it look like one second later, one centimeter away, given that my scaling ratio is 1 cc per cm2?

TarboxTarbox
1
$\endgroup$
Add a comment  |
Highly active question. Earn 10 reputation (not counting the association bonus) in order to answer this question. The reputation requirement helps protect this question from spam and non-answer activity.

Not the answer you're looking for? Browse other questions tagged classical-mechanics fluid-dynamics velocity diffusion or ask your own question.

2
Diffusion across an interface and conservation of mass
1
Concentration of Proteins
3
How do I quantify diffusive flux with two interacting gases crossing a distance of tissue?
2
Physical Interpretation of the Diffusion Constant $k$
3
Does diffusion MRI measure diffusion or osmosis?
0
Negative diffusion, or force that changes particle velocity distribution