Does SR treat time and space symmetrically? Then why does $t$ dilate while $\ell$ contracts?

Can you resolve this paradox: Time and space are supposed to be treated symmetrically in SR, yet time dilates while length contracts. I've been working on this for weeks, and I can't resolve it.

The mirror experiment shows that time and space both expand for the moving observer, in contradiction to the results one derives from the LT, yet a well-known text, Eisberg's Fundamentals of Modern Physics (pp. 20-21) incorrectly concludes the usual asymmetrical results from that, by changing the definition of time dilation! He defines it as meaning that time measured in the moving frame is longer, when tau is actually well-known to be shorter. Time dilation refers to the mover's time UNITS LOOKING longer to the stationary observer because the total number of time units is FEWER, the opposite situation from the mirror experiment.

A spacetime diagram will clarify the meaning of time dilation and length contraction... geometrically comparing and contrasting them. 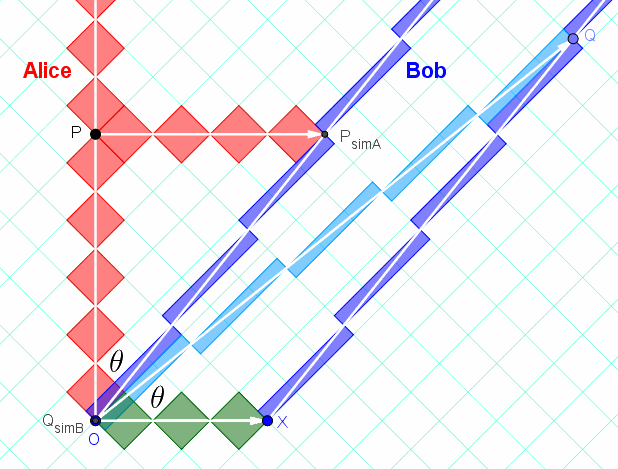 I've tried to compose the following descriptions are analogously as I can.

Time dilation involves Minkowski-right triangle $OPP_{simA}$ (with right angle at $P$ and hypotenuse $OP_{simA}$),
where $P$ and $P_{simA}$ are simultaneous according to Alice
and $O$ and $P$ are at the same location according to Alice and $O$ and $P_{simA}$ are at the same location according to Bob.
Alice observes time-dilation since $\frac{OP}{OP_{simA}}\stackrel{here}{=}\frac{5}{3}$, comparing what she measures the elapsed-time $OP$ to what Bob measured as the elapsed-time $OP_{simA}$ at a time declared by Alice.
This ratio is $\gamma$.
Geometrically, $OP_{simA}$ [along Bob's worldline] is the hypotenuse and $OP$ [along Alice's worldline] is the adjacent side, using the rapidity[-angle] $\theta$ between the worldlines, where $v=\tanh\theta\stackrel{here}{=}\frac{4}{5}$. The time-dilation factor $\gamma$ is equal to $\cosh\theta$.

Length contraction involves Minkowski-right triangle $OQX$ (with right angle at $Q$ and hypotenuse $OX$),
where $Q$ and $X$ are at the same location according to Bob
and $O$ and $Q$ are simultaneous according to Bob and $O$ and $X$ are simultaneous according to Alice.
Alice observes length contraction since $\frac{OX}{OQ}\stackrel{here}{=}\frac{3}{5}$, comparing what she measures for the length of Bob's car (distance between the worldlines of the extent of Bob's car) $OX$ to what Bob measured as the length of his car $OQ$.
This ratio is $1/\gamma$.
Geometrically, $OX$ [parallel to Alice's spatial axis] is the hypotenuse and $OQ$ [parallel to Bob's spatial axis] is the adjacent side, using the Minkowski-"angle" between their spatial-axes, which is congruent to the rapidity[-angle] $\theta$ between the worldlines.

The figures below show a Lorentz transformation in 1+1 dimensions, depicted as a distortion of the original coordinate grid (gray square) to a new one (parallelogram). Time is the vertical axis and space horizontal.

In figure 2, the ruler is moving in the first frame, represented by the square, but at rest in the second one, the parallelogram. Each picture of the ruler is a snapshot taken at a certain moment as judged according to the second frame's notion of simultaneity. An observer in the first frame judges the ruler's length instead according to that frame's definition of simultaneity, i.e., using points that are lined up horizontally on the graph. The ruler appears shorter in the frame in which it is moving. 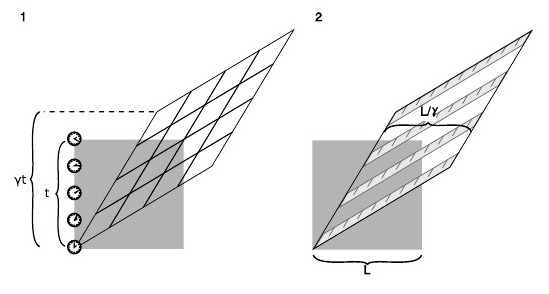 The Lorentz transformation treats in 1+1 dimensions treats space and time in a perfectly symmetric way, but this should not be taken as implying that special relativity perfectly embodies such a symmetry. For example, I can easily revisit a place that I’ve been to before, but I can’t go back in time. And of course we have three dimensions of space; our use of 1+1 dimensions rather than 3+1 is just a matter of convenience for the moment.

There is no close analogy between figure 1, where the clock is a pointlike object tracing a line through spacetime, and figure 2, where the ruler is an extended body that sweeps out a parallel-sided ribbon. So the analogy

is simply false. To make the analogy valid, we would have to replace the ruler with a pointlike object whose world-line was spacelike -- a tachyon.

There is actually a pretty straightforward argument that if time dilation is a factor of $\gamma$, then lengths must contract by $1/\gamma$. Suppose we have already convinced ourselves about how time dilation works. Now let Alice stay on earth while her twin Betty heads off in a spaceship for Tau Ceti, a nearby star. Tau Ceti is 12 light-years away, so even though Betty travels at 87% of the speed of light, it will take her a long time to get there: 14 years, according to Alice.

Betty experiences time dilation. At this speed, her $\gamma$ is 2.0, so that the voyage will only seem to her to last 7 years. But there is perfect symmetry between Alice's and Betty's frames of reference, so Betty agrees with Alice on their relative speed. Betty sees herself as being at rest, while the sun and Tau Ceti both move backward at 87% of the speed of light. How, then, can she observe Tau Ceti to get to her in only 7 years, when it should take 14 years to travel 12 light-years at this speed? We need to take into account length contraction. Betty sees the distance between the sun and Tau Ceti to be shrunk by a factor of 2. The same thing occurs for Alice, who observes Betty and her spaceship to be foreshortened.

I have a longer presentation of this material in ch. 1 of my special relativity book, which is free online.

Not the answer you're looking for? Browse other questions tagged special-relativity spacetime metric-tensor or ask your own question.

4
Why is length contracted but time is dilated?

6
Does the derivation of the Lorentz transformation depend on space having at least two spatial dimensions?
1
Special Relativity - Does this thought experiment correctly prove time dilation and length contraction?
0
Why this intuitive idea on unit length and unit time in general relativity fails so miserably
3
How does exactly time dilate in a gravitational field, and how is it judged by different inertial observers?
2
Confusing definition of proper time – which is correct?