Are there any formal mathematical proofs of this fact? I'm thinking about statements like:

Or anything similar. I'm not looking for intuitive arguments, but rather for proofs in the literature if they exist.

One simple example is the effect of boundary magnetic fields in the Ising model. If I modify the Hamiltonian of the Ising model at the boundary, I can change the physics in the bulk. Consider

$$ H=-\sum_{n=1}^{N-1} J \sigma^z_n\sigma^z_{n+1} +h\sigma_1 $$ If $h$ is positive, the ground state is all spin down; if $h$ is negative, it's all spin up. Changing the Hamiltonian at the boundary changed the physics in the bulk. Why did this happen? It's because there's a level crossing when tuning $h$ from positive to negative; an excited state becomes the ground state, and vice versa. In general, if changing the boundary conditions induces a level crossing, we should expect bulk physics to change.

So I think any theorem that says the bulk physics between the two systems is identical must only be true if the open and periodic systems are adiabatically connected.

The lattice $L$ is semi-infinite (i.e. has a boundary on the left) and is visualized below: 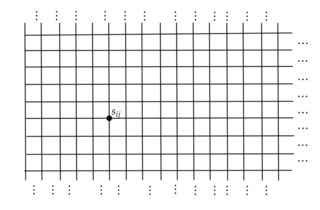 We can then imagine taking a local observable $\mathcal O$ (whose support is visualized below:) and forming the translate $T_j(\mathcal O)$ of the observable $j$ units into the bulk: 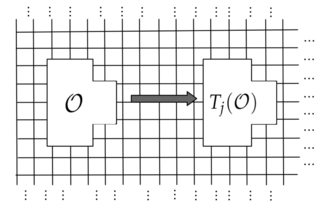 (1) As $N\to \infty$, any observable that only looks at the bulk is not affected by the boundary conditions.

Sketch of mathematical proof of (1)

Similarly, using this transfer matrix convergence argument, one can establish:

(3) As $N\to \infty$, the reduced density matrix in the bulk does not depend on the boundary conditions.

Again, as in the proof of (1), we replace $T^j \sim |GS\rangle \langle GS|$ for $j$ sufficiently large. Again, the key ingredient here is the convergence of the powers of the transfer matrix $T^j$, which loses any "memory" of finite-size effects/ordering as $j\to \infty$.

Extension to a quantum system at zero temperature

Having sketched a quick proof of the intuition "boundary effects do not matter" in a classical setting, it is actually trivial to generalize this to quantify the boundary effect in a quantum groundstate. We actually do not need to redo the proof; instead, we port the proof to the quantum setting by utilizing the quantum-classical correspondence, which states, roughly, that

Therefore, to prove (1-3) for a quantum groundstate, it suffices to utilize the quantum-classical mapping. For example, for the case of the 1+1D transverse-field Ising model (TFIM), we apply the Suzuki-Trotter transformation with time-step $\Delta \tau>0$ to the quantum partition function $$Z=\lim_{\beta\to \infty}\text{tr}(e^{-\beta H_{TFIM}}),$$ which produces a family of effective actions $\{S[\Delta\tau]\}_{\Delta\tau}$ describing statistical correlations of a discrete Ising field on a cylindrical spacetime lattice. The family of effective actions is: $$$$ \begin{align*} S[\Delta\tau]\underset{\,\,\Delta\tau\to \,0\,\,}{\sim} \sum_{j\tau}(J[\Delta\tau]\,s_{j\tau}s_{j+1\tau}+J_\perp[\Delta\tau]\, s_{j\tau}s_{j\tau+\delta\tau})\,\,\,\,\,\,\,\,\,\,\,\,\,.\\ \end{align*} Of course, the boundary effect in the quantum model is then precisely the boundary effect in the 2D classical model, which we bounded in the arguments above (using the transfer matrix).

Going beyond this illustrative example

I hope that by now this is clear: using the powerful combination of the quantum-classical correspondence with the transfer-matrix method (all standard methods in the condensed matter toolkit), one can quantify boundary effects in a wide class of quantum groundstates, far beyond the example here with the 1+1D TFIM. Anyways, I hope that this answer both explains why physicists have the intuition that they have, and also demonstrates that a mathematical proof of the boundary effect, at least in a rather general setting of "trotterizable" gapped spin systems with nearest-neighbor interactions, is well-established (or at least should be) in the literature.

Mathematically, a periodic function, satisfying certain general conditions can be expanded in Fourier series. When dealing with a non-periodic function, defined in an interval, one can still continue it periodically beyond the interval of interest, and expand in Fourier series, that would still faithfully represent this function in the interval. One can than proceed in two ways:

Not the answer you're looking for? Browse other questions tagged quantum-mechanics condensed-matter boundary-conditions or ask your own question.