How pure is the tone produced by a typical tuning fork in air?

When a musical instrument plays a note that note is usually just the highest amplitude contribution to the sound wave. That peak is known as the fundamental harmonic, and the Fourier transform of the sound wave also has peaks at higher frequency harmonics, known as overtones, and possibly at lower frequencies, called undertones. These peaks have finite width, and there's frequently some kind of overlap.

One way to see answers to this question is to enter "tuning fork spectrogram" (without quotes) into a search engine. The answer, qualitatively, is fairly pure, after the initial high pitch transients from striking it die out.

In the spectrograms presented in this work (Douglas Lyon, “The Discrete Fourier Transform, Part 5: Spectrogram”, Journal of Object Technology, Volume 9, no. 1 (January 2010),pp. 15-24), Figures 4 and 5, the tuning for clearly has both overtones and undertones present in the spectrogram. Qualitatively, though, Figure 4 (the one with a linear stretch) makes it appear that the fundamental is very dominant, probably at least a factor of 2 louder than the nearest harmonic (a difference of about 3 decibels). The downside is that this kind of quantitative statement based on the presented information could be wildly inaccurate (the numbers are guessed).

This video presents a spectrum for a recording of a tuning fork, but the horizontal axes are difficult to read.

The followup video shows animations of the different modes from a finite element analysis. This video is interesting primarily for it's demonstration of how many of the higher frequency modes are unbalanced, producing motion at the part of the tuning for that is held/mounted, leading to their increased damping speed.

Downloading the audio from the first YouTube video and feeding part of it (roughly time code 2:21.75 to 2:25.6) into Audacity gives me a spectral analysis of the tuning fork recording (Hamming window). 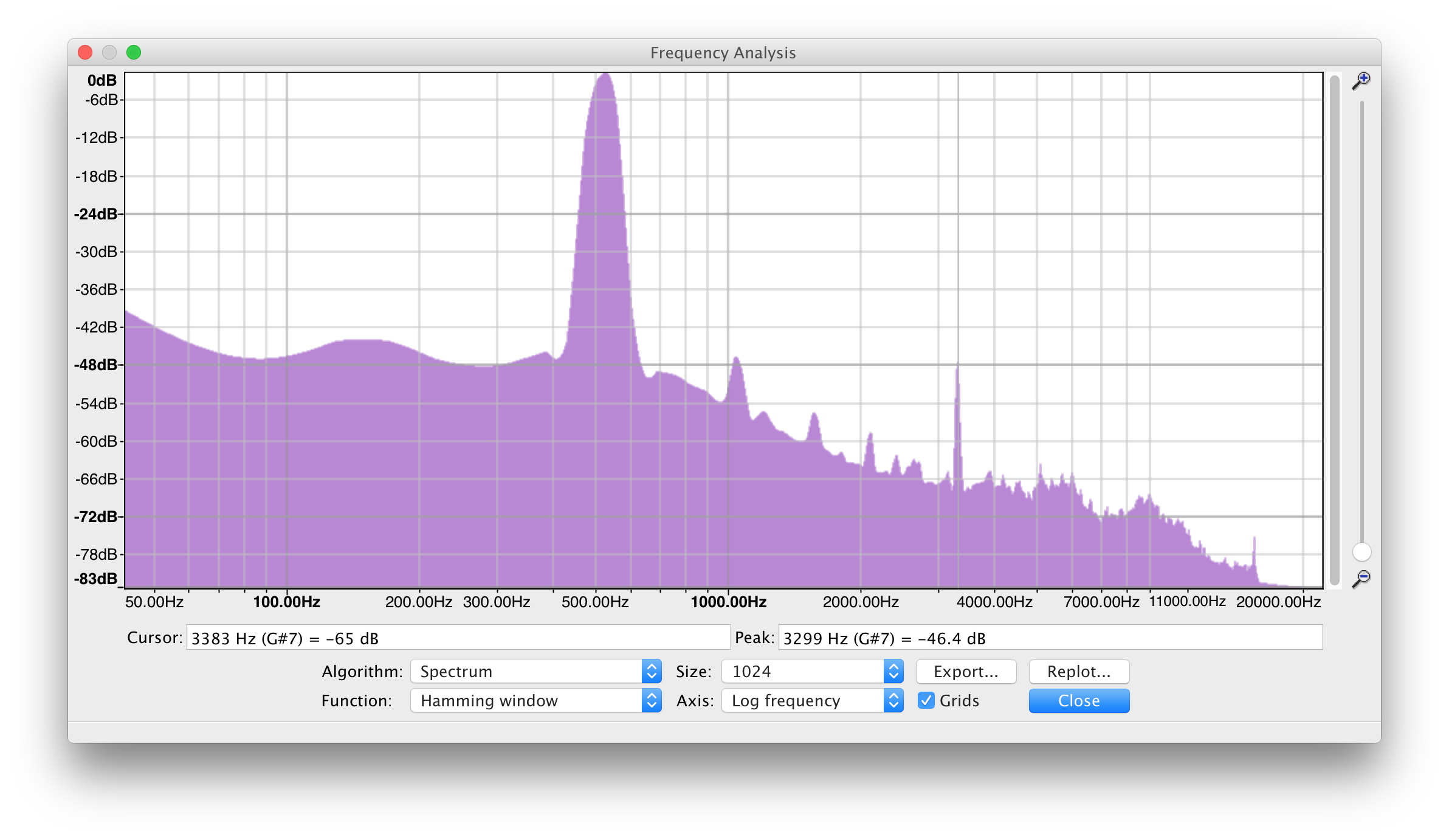 As you can see from the plot, the next highest peaks are about $46\operatorname{dB}$ down from the fundamental.

Not the answer you're looking for? Browse other questions tagged acoustics fourier-transform or ask your own question.

3
How to find the first-harmonic frequency from the frequency spectrum of a recording of this harmonic being struck on a guitar?
2
Why is a single string's vibration very weak but on the other hand, a guitar's string can be very loud?
2
Where do pure tones occur in nature, besides harmonics?
4
Frequency drift of a tuning fork
0
How does the sound of a tuning fork depend on the size of a tuning fork?
3
First harmonic above fundamental in piano recording?