Why would one paint the framework of a telescope red in the tropics? [closed]

If it's painted red it will reflect red/absorb bluer light. Don't see how this makes any difference to the telescope. Because the tropics are mentioned I assume that the sun has something to do with the question. Not entirely sure what a fixed geometry refers to either.

Any help is appreciated.

Sounds like a poorly designed question to me. The question somehow assumes painting the telescope red makes it less susceptible to thermal expansion/contraction in tropical weather. Unfortunately such bad questions are not rare in text books.

I agree with @user3394040 : this is a bogus question. There is neither any professional or amateur astronomical advice to paint a telescope's framework red (in the tropics or elsewhere) nor is there any scientific advantage in doing so.

Googling your original title, the only reference I found is in Appleton's Popular Science Monthly, February 1897. On p 544 in a Sketch of Maria Mitchell, an American amateur astronomer from Nantucket, North America, her father is reported to have painted the framework of his telescope bright red in rebellion against the strict rules of the Society of Friends which prohibited the wearing of bright colours. No astronomical or optical reason is given for doing so.

This might be the origin of the examiner's question, although the climate of Nantucket could hardly be described as tropical. The examiner might have presumed there must be a scientific reason for painting the framework red, and invented such a reason to explain the unusual colour.

In the same search, in an article titled Beating the Seeing in Sky and Telescope Magazine dated August 2006, senior editor Alan MacRobert stresses the importance of ensuring that the telescope is at the same temperature as its surroundings :

A telescope's immediate surroundings should have low heat capacity so it doesn't store up the warmth of the day. ...

If you build an observatory, use thin materials that cool quickly: plywood or sheet metal, not masonry. Paint it white or a very light color to reflect solar heat. Special heat-reflective paints are available; they reflect infrared as well as visible light.

In an article from the University of Michigan Astronomical Society discussing the best colour for Observatory Paint, white paint is recommended because it is highly reflective at visible wavelengths while being a good emitter/absorber ("almost black") at long IR wavelengths (approx $10 \mu m$, corresponding to about $25^{\circ}$C). This minimises the heat which the telescope environment absorbs during the day and maximises the speed with which the telescope and its environment reach thermal equilibrium during the night. 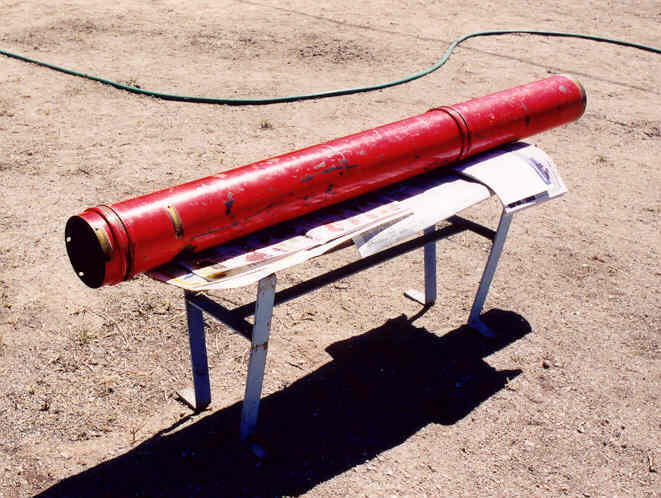 I also found the above photograph of a 5 inch telescope made in 1888 by renowned US firm Alvan Clark. It had been used to view the transit of Venus across the Sun, possibly in the tropics, and was coated heavily in thick red paint, with a layer of white beneath. The University of Arizona restored the original brass surface. There is no indication why it was painted red. Following Alan MacRobert's advice, I suggest it might have been painted to avoid overheating of exposed brass surface during the daytime sightings, although it is not clear why red was chosen instead of white.

Not the answer you're looking for? Browse other questions tagged homework-and-exercises optics telescopes or ask your own question.

6
Charge Distribution on a Parallel Plate Capacitor
0
Can I use one convex lens to create a telescope?
2
Orthogonality of Gravitational Wave Polarizations
0
When to use and not use Gauss's Law?
0
Angular velocity of thrown object?
0
Calculated focus of an asymmetric bi-convex lens