2); How can the clocks in each reference frame (A and B) run slower than the other?

In order to "see" what's actually going on here, an explanation in plain English to assist the mathematics would be helpful.

In the context of your scenario, if two observers in relative motion agree on the elapsed time between two events, then you are back to the absolute time structure of Galilean physics. That structure is not compatible with the principle of relativity and the speed of light principle. For example, if the two observers exchange light-signals "at the same time", they would receive the signals at different times. 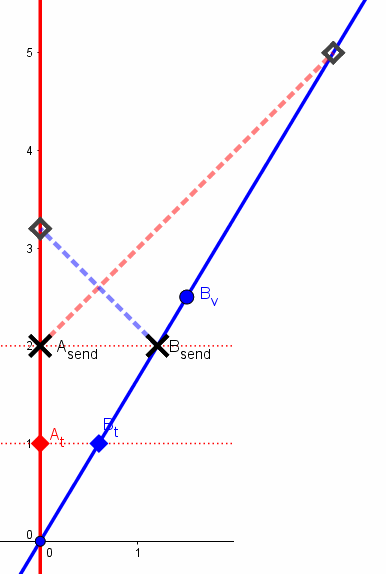 So, let's look at the details using a spacetime diagram on rotated graph paper, in accordance with special relativity. 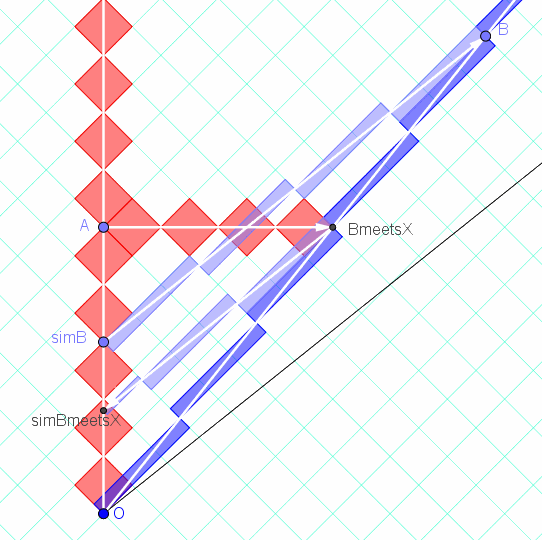 As you've said,...
In the earth frame (along OA), that event occurs 25 years after the separation event O, at a location 20 light-years away from OA. Note these measurements use the earth's light-clock diamonds and uses the event A, which the earth says is simultaneous with event BmeetsX.

In the spaceship frame (along OB), this event BmeetsX occurs 15 years after the separation event O.

All of the proportions in the previous paragraph are correct. But if you want to see a direct comparison, the spaceship should wait until 25 years (5 diamonds) have elapsed on its worldline... the event I labeled B. In that case, the event on the earth that the spaceship says is simultaneous with B is simB. I think you can see that simB is 15 years after event O, and that simB is 20 light years away. So, there is the symmetry displayed.

Underlying these diamonds is the geometric structure of special relativity: Minkowski spacetime geometry, whose "circles" [figures of equal time-elapsed] are hyperbolas. In the diagram below, time runs to the right [rather than upward, as in the earlier diagrams]. 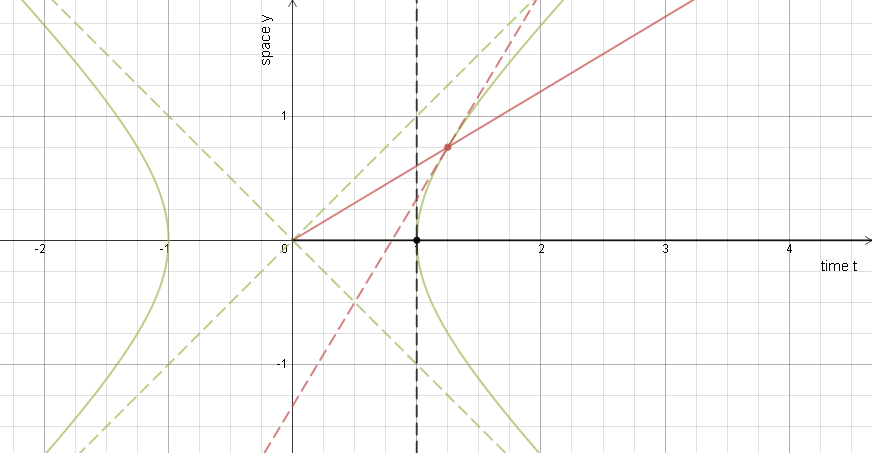 Now here is the answer to Question 2.

This is a great question--how can each clock run slower than the other? It is not at all intuitive, and the correct answer is that spacetime (Minkowski space) is hyperbolic, and the metric preserves $c^2(\Delta t)^2 - (\Delta x)^2 $, thereby allowing both observes to see the other running slower and length contracted.

Now if by ""see" what's actually going on here" you mean "make intuitive from a Galilean point-of-view", I'm afraid that's not possible. It is a property of the geometry of space-time, and "see"-ing what is going on is analogous to answering: two ships are on a collision course, head-on. Each turns to port and they miss. Both captains see the other captain move to the right, how is that possible?

Well, you must remember that only when the person comes back to earth , will he be able to tell the difference in time elapsed for him and for his counterpart on earth. Then, it follows simply from lorentz formulae that the moving observer has his time dilated and not the one who stayed behind. If else, no such meeting of the two takes place , there is no way of deciding who's clock is running slow - both are right. You can read the " twin paradox" which i presume is present in almost all books on special theory which details this procedure.

In this problem there is an apparent symmetry which usually mislead us. The situation is not symmetrical so the conclusions of your point (1) aren't right. I'll try to explain.

You can look at a more complete discussion on time dilation that comprehend the above discussion on Landau-Lifshitz Course of Theoretical Physics Series, Vol 2, The Classical Theory of Fields, chapter one.

I hope it helped.

2005: Today marks five years since Sally took off. She's one-fifth of the way there. But her calendar-clock says 2003. It seems to be running slow.

2015: Today marks fifteen years since Sally took off. She's three-fifths of the way there. That slow calendar-clock of hers says 2009.

But my question was: Does this symmetry REALLY exist DURING THE PERIOD OF UNIFORM MOTION? How can each clock be running slower than the other during this period?

The measuring procedure has some interesting details.

It is often said, that a single clock dilates relatively to a reference frame of observer, a.k.a rest frame.

Very often observer in special relativity is not a physical person, but the whole frame itself, or team of observers. Each of them possesses a clock and these clocks are Einstein - synchronized by beam of light. The beam of light travels from observer to observer and they adjust their clocks accordingly, since they know velocity of light c and distance the beam travels, so they can calculate how much time it took for the light to go from clock to clock.

If moving clock C1 and clock A showed 12 PM at meeting, moving clock will show 3 PM and clock Z will show 6 PM when they will meet. This is how time dilation works. SINGLE moving clock dilates relatively to a set of synchronized and spatially separated clocks, not vice versa. Set of clock runs faster from the point of view of single clock.

This article emphasizes this detail at page 6 (6)

http://www.pstcc.edu/departments/natural_behavioral_sciences/Web%20Physics/Chapter039.htm "Two spatially separated clocks, A and B, record a greater time interval between two events than the proper time recorded by a single clock that moves from A to B and is present at both events."

If observer, who was once in motion wants to measure dilation of relatively moving clock, he has to turn himself into one "at rest" and introduce his own rest frame by means of putting two Einstein - synchronized clock at point of departure and arrival of single clock.

Good to note, that only observer "at rest" measures dilation of moving clock. To get reciprocal observations, we have to "forget" old frame and replace it with a new one, this way turning that observer who was once in motion into one "at rest".

If Single clock compares it's readings successively with clocks of rest frame, it will measure, that time in reference frame runs faster.

Is that what you were looking for?

Reflection from a transversely moving mirror graphically demonstrates that. https://www.youtube.com/watch?v=FQKp3FU8vR8

78
What is time dilation really?
24
Time dilation all messed up!
-1
Time Dialation in Uniform Motion