How does splitting a spring result in a higher maximum velocity?

I'm modelling some SHM parameters when splitting a (massless) spring into two pieces and getting stuck on what happens to the maximum velocity component.

Model one of the springs drawn to half the original length (with the same 1kg mass attached).

How is the maximum velocity component correct?

Imagine I place this second system in a massless box and attach it to the other half of the spring. I now pull the box down by 0.5m and the mass (inside the box) down by 0.5m too. 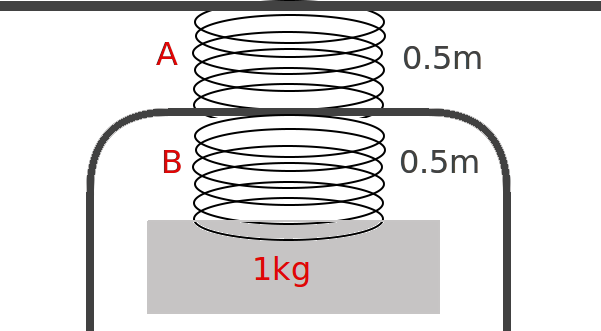 When I release everything, there will be two independant mass-spring systems (running with the same SHM parameters). The resulting maximum velocity of the mass will be: 2.83 m/s (from the box being accelerated by spring A) + 2.83 m/s from spring B = 5.66 m/s - an increase of 1.66m/s from the original system.

What I don't understand is that the initial conditions are identical - a 1kg mass drawn down by 1m, yet the second system results in a higher velocity. In the limit of the massless box being discarded (and the springs being glued back togther), how is this difference reconciled?

To illustrate this, let us assume that spring A behaves as you assume, that means as if the box were rigid (which is not true, see floris answer). If you solve using energy conservation in the non-inertial system inside the box, you need to add the "potential energy" of the pseudo force $a=\omega^2x$. Using that you get $V_{max}=x\sqrt{\frac{k-\omega^2}{m}}$, thus the maximum speed of the mass relative to the contact point changes if the point is accelerated.

Your error is your assumption that the change in velocity is the same in both cases; it is not.

One way of consider this is to say that the change in momentum is equal to the impulse $\int F\cos \omega t\, dt$.

Now for both motions the force due a spring starts and finishes at the same value but the second motion takes a shorter period of time (less than a quarter of a period) and hence the change in velocity for the second motion is less although the work done by the springs $\int F\, dx$ is the same.

If you want to use the idea that the motion is simple harmonic you must find the change in velocity for the second motion assuming that the mass is already moving and not starting off stationary ie it is already part way to its final velocity.

If you do the sums in terms of energy transformations everything works out.

The "black box" is not an inertial mass - there is "something inside the box that is moving". That requires a force on the box "just to keep it still". Imagine someone is in an elevator, jumping up and down. You know there will be fluctuations in the force on the elevator cable - even though the car might not be moving.

28
Is the spring constant k changed when you divide a spring into parts?

2
Spring stiffness calculation problems
2
Showing that a mass moves a half cycle
3
How to apply Newton's Third law when a massless spring is compressed by a moving block?
0
Why do two things lose contact only when normal = 0?
6
Mass hanging from spring in free fall