Well logically I tried and got the answer as b) but apparently the correct option is a). I think that it may be possible that all the thermal energy being obtained by the water in B is conducted (whether by conduction or convection) to the water and A and hence the temperature remains more or less the same. But after some time when the water in A has reached a certain point after which it starts boiling, there is no other place for the thermal energy to go (it can't escape into the atmosphere since it is a comparatively worse conductor than water) and therefore the water in B starts boiling after A.

But I'm unable to put forward a concrete logic supported by scientific evidence. Any help would be appreciated.

(I apologise for the improper use of the tags as I'm unclear about the tags to be used.)

I think you could argue the question is quite unclear. (from my perspective)

In a one-dimensional problem I will agree with your book that the answer is a). That is, assuming that the vessel A and B are only represented by height and vessel A is completely on top of vessel B. This is because the convection will always bring the warmest water upwards (due to the lowered density). Assuming the vessel A is sufficiently conductive the heat should keep rising through vessel A. Since vessel A is floating on B, in the one-dimensional vertical problem A will boil faster.

In the two or three-dimensional case I don't know if this question is clear.

In those situations it would depend a lot on the buoyant conditions, and as far as I could tell they would start at similar times. If the liquid level in vessel A was higher than B (it would have to be a vessel made of something lighter than water AFAIK) then liquid in A would start to boil first, due to convection upwards.

If the liquid level in B is higher than A, B should boil first, due to convection as well. If they were the same height, they should boil at the same time due to the convection. 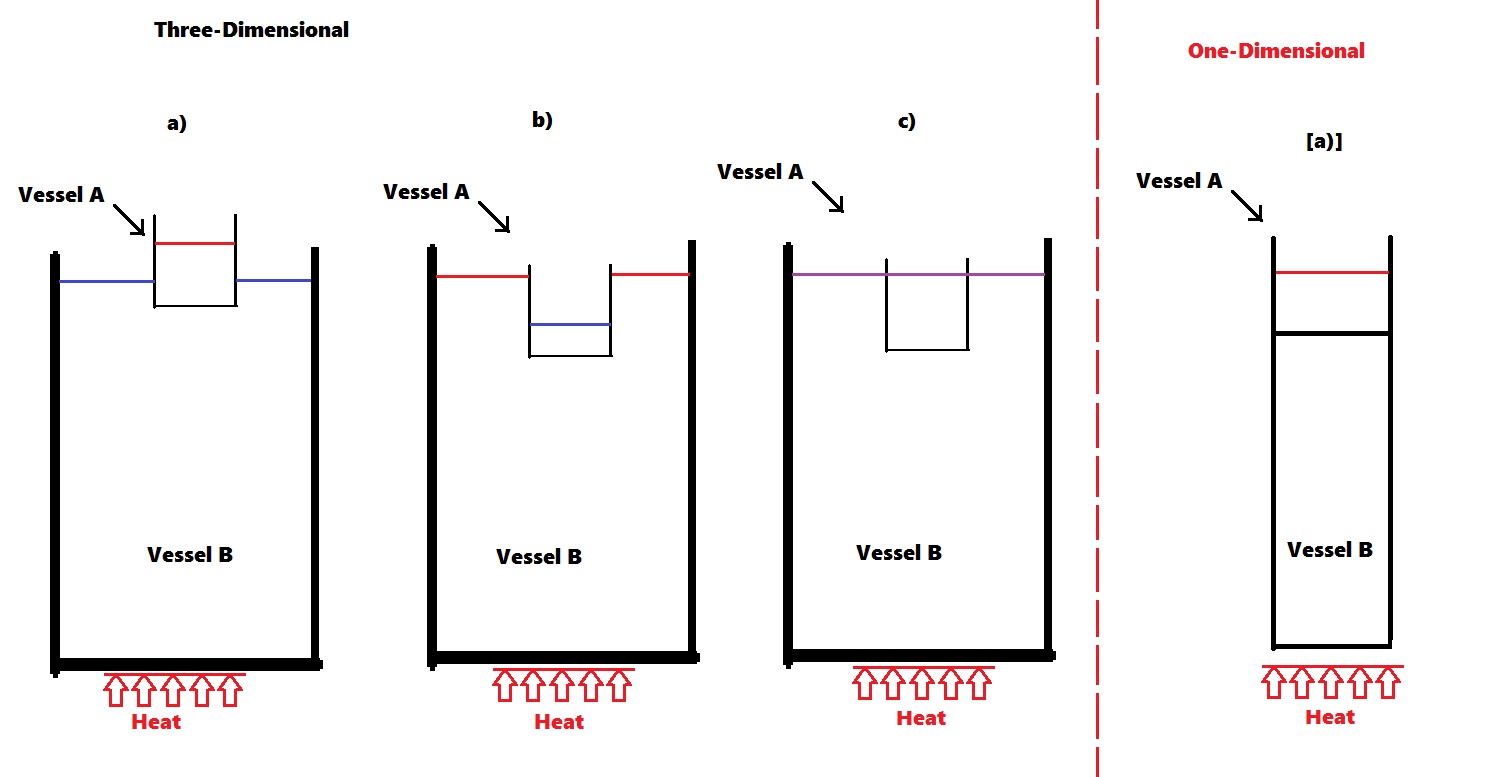 This is all assuming the vessels are very conductive and thin; specifically vessel A, I don't know why vessel B is conductive. Maybe it's something I'm missing, but it seems like it would just slow the whole process by losing heat to the sides. This could hurt or hinder vessel A's heating, because if vessel A is in the very middle it may heat up first due to heat lost out the sides. If it's near the edge the middle will probably boil first, given sufficient total diameter; again depending on the problem specifics.

If anyone thinks of anything I've overlooked please let me know. I find heat transfer is easy to miss something that completely changes the situation.

Not the answer you're looking for? Browse other questions tagged homework-and-exercises thermodynamics convection or ask your own question.

6
Do my noodles cook quicker when the water is boiling or when it is just about to boil?
4
Why do steam bubbles increase in size as they rise?
12
Does placing a lid on a pot affect the rate of boiling?
1
Heat Losses from water pan due to vaporisation before boiling
0
Methods of Heat Transfer
37
What is the reason for this pattern of noise in electric kettles?
6
Why do tea bags sometimes float and sometimes sink?
1
How does boiling-point elevation due to a solute affect the steam/gas that is created when boiling?