How does a box move when an instant force at location is applied?

What I'm trying to understand

I want to understand what is the linear velocity and angular velocity result of a cube pushed by an instant force at location in the void, with no frictions, no gravity and no other forces, and total freedom.

The instant forces is applied at the top of cube and is orthogonal to the COM, as showed in the image below. 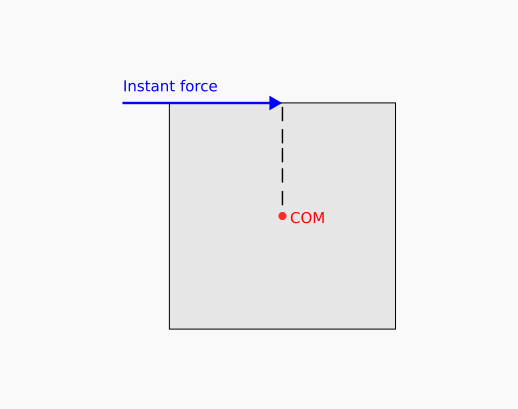 Tests and searches I did

For These reason I've speculated that the box gained linear velocity because the ground friction, air friction, they gave back some normal forces that applied traslation movement.

So I not consider the test I've did before, and I've searched on the internet where I've found a forum's thread where a person says that the COM tries to not traslate when a box is pushed by a force that is not al COM, so it rotates.

So at this point I've two different view of the same problem, so I've thought to reproduce this problem using a software PhysX.

When the simulation software, that I've set, was started, the box started to rotate and traslates like the first test I've done.

After some checks I did on the software to be sure no forces were acting, I've understand that the definition I've readed on the forum was not correct.

I don't know how to write better than this but what I'm trying to understand is:

If is correct that the box will rotate and traslate when pushed in the side like shown in the image, what is the result linear and angular velocity? and how it's calculated?

In other word I'm searching how to calculate the linear acceleration and the angular acceleration by knowing the Force vector and the Location where the force is applied.

So sorry if I was too vague, I hope now my question is well formed and well argue to get complete response.

Usually, specify $\Delta t$ to be small and $F$ to be large.

Conclusion:
Yes it will translate (even if there is no gravity)
and rotate (If the line of force does not pass through the center of mass, that is, if $\sin \theta$ is nonzero).

As per diagram, and as far as I could gauge from the question and the comments after it, the box will rotate and translate.

By adding two extra forces both equal in magnitude to the instant force but opposite in direction you create a couple (blue) and a force (red) acting at the centre of mass. 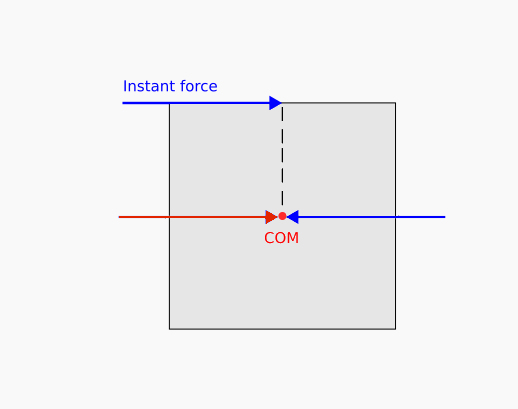 4
force applied not on the center of mass
1
Find force of friction on an object under influence of tension by another object
1
Relationship between applied and normal force?
0
Why does ground contact change whether or not an object will rotate/move
2
Is my understanding of how a force is applied through a string correct?
9
How do forces 'know' they need to move when a system is in motion?
0
Physics studying Forces help sos