Is quark and gluon orbital angular momentum predicted to have the rest of the proton's spin?

The Phys.org news item How did the proton get its spin? outlines various experiments that probe proton structure and are sensitive to spin, and the current news is that CEBAF's major energy upgrade will allow new kinds of investigations.

The news item identifies two experimentally measured sources of spin; the spin of the quarks and that of the gluons. Together these account for about half of the proton's total spin (25-30% and about 20-30%, respectively). It then says:

There's one major source that researchers haven't yet explored: orbital angular momentum. Orbital angular momentum comes from the movement of the quarks and gluons relative to each other. While theorists have developed simulations that model this contribution, scientists haven't had the equipment to test them.

The article says there's one more place to look for a contribution, and that "theorists have developed simulations that model this contribution". 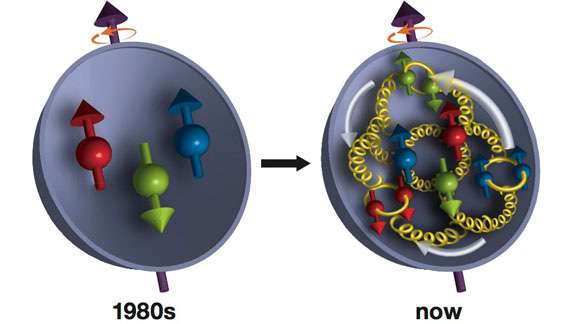 above: In the 1980s, scientists discovered that a proton's three valance quarks (red, green, blue) account for only a fraction of the proton's overall spin. More recent measurements have revealed that gluons (yellow corkscrews) contribute as much as or possibly more than the quarks. Credit: Brookhaven National Laboratory, from here.

Edit after the discussion in the comments:

Taking a look at this CEBAF paper, they rely on the lattice QCD calculations here which predict coverage of 110% on proton's spin.

I think that what you ask is already answered in the article :) But this is one of the open questions in particle physics, so it's natural to rise curiosity...

Q: "Is most of the remainder expected to come from orbital angular momentum of the quarks and gluons?"

Q: "or are there still other major sources expected?"

Afaik, there is no other major proposal made to explain this. I can only add that, in general, QCD calculations still carry considerable uncertainty; so people are more prone to sit back and wait to see what happens with open QCD questions than they are for other sub-fields.

Not the answer you're looking for? Browse other questions tagged quantum-spin quantum-chromodynamics protons lattice-model or ask your own question.

4
How do partons' spin/orbital angular momenta contribute fractionally to the nucleon spin structure?

9
Addition of Angular Momementa in deeply bound situations, proton spin crisis
4
For mesons, or baryons, do sea quarks contribute to the angular momentum of the bound state?
7
If proton spin emergence from quarks and gluons is mysterious, why is silver atom spin not?
3
Why is the Spin of the photon neglected?
11
Angular Momentum of the Dirac field
4
How do partons' spin/orbital angular momenta contribute fractionally to the nucleon spin structure?
2
Decay of neutral kaon into two pions and conservation of angular momentum
3
Most of the momentum of a proton is carried by the quarks
2
Does the angular momentum density $\mathbf r\times(\mathbf E\times\mathbf B)$ account for the spin?