If we set up a double slit experiment, where at the slits we put a strong magnetic/electric field, and sent an electron through, what would happen?

Experiments with electrons on edges under the influence of an electric field were done in 1956 by G. Möllenstedt and H. Düker. ("Beobachtungen und Messungen an Biprisma-lnterferenzen mit Elektronenwellen" (Observations and measurements on biprism interferences with electron waves) from Zeitschrift für Naturforschung 10 a S. 256a). For deeper reading an excerpt of mine in poor English.

The two researchers from the Institute of Experimental and Applied Physics of the University of Tübingen directed an electron beam from a dot-shaped source through an electrostatic biprism. The biprism consisted of a gold coated quartz wire from two micrometers thickness (F), which was stretched between the two grounded plates of a plate capacitor.

If initially the biprism stays potential free, the entrance slit produces a shadow of the wire and outside the geometric shadow appear electron-free fringes, called according to the original script "FRESNEL diffraction fringes". 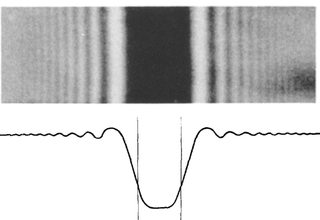 Applying a positive voltage of only a few volts on the filamentary center plate, the electrons of the two partial beams are bent towards the center. For the - in accordiance to light 105 times smaller cross section of the electron - a potential of +7 volts was enough for a successfully diffraction of electrons. "The wire potential was increased in small increments from zero to + 7V. The small filament diameter from a few μ causes that the required for the beam deflection field strength is achieved in the vicinity of the wire after just a few volts potential difference"(p. 384). With a positive potential the diffraction images of the right and left edges are shifted to each other. 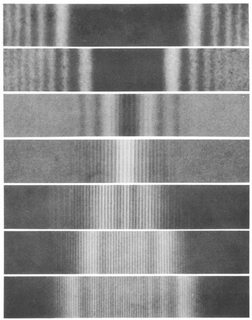 Would the magnetic/electric field collapse the wave function of the electron, or would the electron still create an interference pattern?

As you see above, no. The intensity distribution behind slits (as well as behind any sharp or thin edges) stil appears. And the dimensions of the fringes are influenced by the applied electric potential.

Not the answer you're looking for? Browse other questions tagged quantum-mechanics magnetic-fields double-slit-experiment interference or ask your own question.

1
Why can‘t the Double Slits Experiment be explained by a Particle?
0
Can the intensity distribution behind edges and slits be explaint by the interaction with the surface electrons of the edges?