If I put one of the slits from the Young's double slit experiment apparatus into a different medium what happens to the fringe width?

I recently learnt the young's double slit experiment and its basic formulas, but i wondered what would (mathematically) happen if i put one of the 2 slits into a refractive medium such as water or glass. If a formula exists please show the derivation.

Note : The medium is only in between the slit and the screen , everything else is the same .

The main effect of placing a refractive medium in one of the beam paths is that the phase of that beam will be delayed by an amount depending on the refractive index of the medium and the thickness of the medium. If the phase of one of the beams is delayed slightly, the interference fringes will shift laterally. Delay the phase by 1/2 cycle, and the fringes will shift by 1/2 of their spacing.

Note that the whole fringe pattern will not be shifted laterally. The fringe spacing (which is greatest in the middle and gets smaller toward the outside) will not be changed in the pattern; only the locations of the bright and dark fringes will change. In other words, for small shifts the amount of lateral shift is proportional to the fringe spacing. If the amount of shift is an integral number of full cycles, then the fringe pattern will return to its original form. That's not exactly true. If the total phase shift is greater than the coherence length (in cycles) of the light source, then the light from the two slits will not interfere to form fringes. Fringe contrast is a function of the mutual coherence of the two beams.

So, a two-slit interferometer with an adjustable-thickness refractive medium in one path can be used to measure the coherence function of a light source.

The fringe pattern will be narrower.

In the conventional derivation that is done in schools, for the sake of simplicity the light coming from both the slits travels through the same medium. For sustained constructive interference the path difference of the two coherent sources must be an integral multiple if lambda ie. n lambda and for destructive interference equal to integral multiple of lambda/2. Now let the path travelled by light in a medium of thickness 't' and refractive index 'u' be 'x'. Here, x = u t

So for any specific arrangement of yours you simply have to find the path difference of the light from the two sources the same way you do otherwise, but take multiply the distance by 'u' for the corresponding ray.

The fringes will be more blurred.

If you will perform such an experiment here is the explanation how to prove what happens. First at all we have to discover what happens if we use only one of the two slits. You will see that one slit still form an intensity distribution (fringes) on the observers screen. 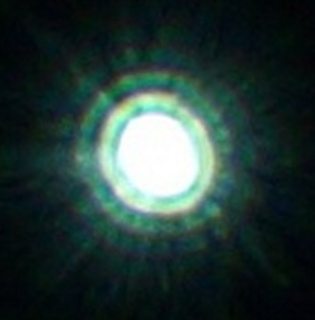 Not the answer you're looking for? Browse other questions tagged optics refraction double-slit-experiment or ask your own question.