Current in circuits and conductivity

I'm really puzzled with a problem for a rather long time and I can't really seem to be able to solve it at all. It has to do with the electrons that move in a circuit.

Know, we are told that conductive materials are materials that have a specific chemical structure, that allows them to have free electrons, being able to wonder freely in the material. We are told that if we apply an electric field (voltage) on such materials, the random motion of the free electrons inside the conductor will acquire​ a resultant velocity, and that its' direction will depend on the electric field that we applied.

Let's take a wire made of Copper. Copper has 29 electrons, 29 protons and 35 neutrons. The electrons are arranged in levels with 2, 8, 18 and 1 electrons. 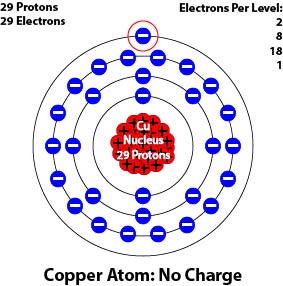 Shell 1 has 2 electrons held by 29 protons. They can leave the atom if they can overcome attractive force of 29 protons.

Shell 2 has 8, held by 27 protons. To leave, electrons would only require attractive energy of 27 protons. Less energy than Shell 1.

Shell 4. Valence Shell. 1 electron held by 1 proton. This electron is far from the nucleus (in atomic terms) and can become a free electron if it overcomes the attractive force of 1 proton.

Heat, light, physical force and emf (electromotive force) can cause this electron to leave the copper atom. The electron becomes a free electron and the copper atom becomes a positive ion $Cu^+$. All atoms want to be balanced (the same number of electrons and protons).

With no emf, movement of electrons is random. They collide with full Cu atoms and are attracted by $Cu^+$ ions, becoming full Cu atoms. This is shown in the following animation.

So conduction or current is simply the flow of electrons.

If current stops, the majority of free electrons will be attracted to $Cu^+$ ions, so there will be few free electrons (aside from those released by heat, etc.). Any free electrons would spend time bouncing off of full atoms or insulators.

Hope you can visualise it

Not the answer you're looking for? Browse other questions tagged electric-circuits electric-current conductors batteries or ask your own question.

5
Why doesn't current flow when the wire is open?
1
Voltage and current at Points Throughout a Circuit
1
Does a battery actually provide electrons or are they the electrons in the wire moving due to potential difference?
0
Impact of +ive terminal of the battery on the wire (Conductor)
1
What is the voltage in electrical circuits?
0
What happens if you connect a wire to the anode of a battery, but not the cathode?
0
Can a voltmeter itself disturb the electrochemical potential of battery?
0
Why current drops when voltage increases?
2
In a new unconnected battery, has a chemical reaction already occurred to cause excess electrons on anode end?
0
What are the electrons doing? Voltage of two batteries in a series