I am having problems understanding the exact definition of internal energy. Different sources say different things. My textbook says that the internal energy of a system is the sum of the kinetic energies and potential energies of all the molecules present in it. But wait! Is thermodynamics not a macroscopic study of systems? Are we allowed to mention atoms and molecules while defining thermodynamic quantities?

I tried Physical Chemistry by Peter Atkins. The approach adopted there seemed like the way to go. I still have some doubts. This is an excerpt.

The formal statement of the First Law

We begin by pretending that we do not know what we mean by 'energy'. We pretend that we only know what is meant by work, because we can observe a weight begin raised or lowered in the surroundings. We also know how to measure work by noting the height through which the weight is raised. Throughout this section, work will be the fundamental, measurable quantity, and we define energy,heat and the First Law in terms of work alone. We shall employ terms that have been established by the Zeroth Law of thermodynamics, namely, state and temperature and the concepts of temperature and the concepts of adiabatic and diathermic walls.

Q1. One of our objectives here is to define heat. If we do not know what heat is how do we know the meaning of adiabatic or diathermic? Does it not make the definition circular?

In an adiabatic system of a given composition, it is known experimentally that the same increase in temperature is brought about by the same quantity of any kind of work we do on the system. Thus if 1 kJ of mechanical work is done on the system (by stirring it with rotating paddles, for instance), or 1 kJ of electrical work is done (by passing an electric current through a heater), and so on, then the same rise in temperature is produced. The following statement of the first law of Thermodynamics is a summary of a large number of observations of this kind.

This form of the law looks completely different from the form we gave before, but we shall now see how it implies $\Delta U=q+w$.

Suppose we do work $w_{ad}$ on an adiabatic system to change it from an initial state $i$ to a final state $f$. The work maybe of any kind (mechanical or electrical). However, the First Law tells us that $w_{ad}$ is the same for all the paths and depends only on the initial and final states.

The fact that $w_{ad}$ is independent of the path implies that to each state of the system we can attach a value of a quantity-we call it the 'internal energy' $U$- and express the work as a difference in internal energies.

$\Delta w_{ad}=U_f-U_i=\Delta U$ This equation also show that we can measure the change in internal energy of a system by measure the work needed to bring about a change in an adiabatic system.

Q2. Is there way to show that there is some "adiabatic path" between any two states? Isn't this necessary for the definition of internal energy to be valid? 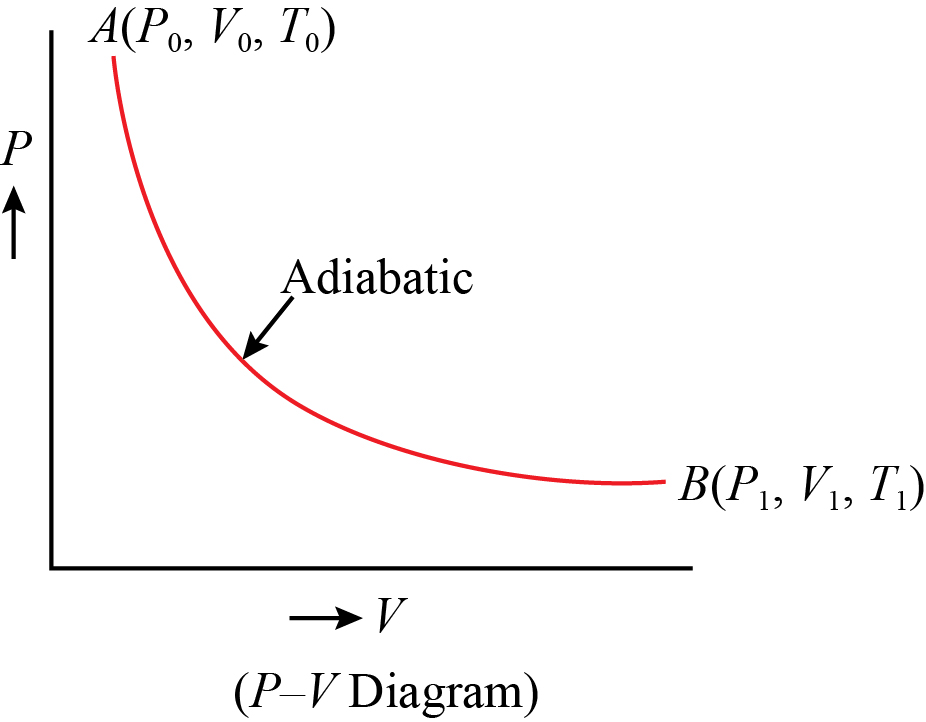 For instance all the states that can be reached from $P_0$ by expanding adiabatically lie on the curve. The above definition does not tell us exactly how to evaluate the value of internal energy between two points between which there is no "adiabatic path".

The mechanical definition of heat

Suppose we strip away the thermal insulation around the system and make it diathermic. The system is now in thermal contact with its surroundings as we drive it from the same initial state to the same final state. The change in internal energy is the same as before, because U is a state function, but we might find that the work we must do is not the same as before. Thus, whereas we might have needed to do 42 kJ of work when the system was in an adiabatic container to achieve the same change of state we might have to do 50 kJ of work. The difference between the work done in the two cases is defined as the heat absorbed:

Q3. What am I missing? Is there any nice article that clearly defines internal energy? Information regarding books or links will be appreciated.

Q1. One of our objectives here is to define heat. If we do not know what heat is how do we know the meaning of adiabatic or diathermic? Does it not make the definition circular?

We do not know what heat is but we do know that there are thermometric properties (length, volume, electrical resistance, pressure, etc) that may change when we let two bodies interact. If there is no change on any thermometric property of a given body regardless of the presence of any other body in the neighborhood, then we say that there is an adiabatic wall between them. Otherwise there is a diathermic wall.

Q2. Is there way to show that there is some "adiabatic path" between any two states? Isn't this necessary for the definition of internal energy to be valid?

There is not always an adiabatic curve going through two arbitrary points of the pV diagram. If there were, then every possible process would be adiabatic which is not the case. What is necessary for the definition of internal energy is that given an arbitrary state $A$ there is always a state $B$ which can be reached from $A$ by an adiabatic process. The number of possible such states are actually infinite but it does not mean that any possible state of the system can be reached from $A$ by an adiabatic process. Then one proceeds by defining the internal energy difference between $A$ and $B$ as $\Delta U=-W_{\mathrm{ad}}$, where $W_{\mathrm{ad}}$ is the adiabatic work between the states. Note that up to now we are not able to say that $\Delta U$ is a state function since we cannot define it for two arbitrary states.

Q3. What am I missing? Is there any nice article that clearly defines internal energy? Information regarding books or links will be appreciated.

I hope the answer of the two questions above help you to understand the whole picture. The final step is to remove the adiabatic insulation. Now there is a thermodynamic process for any two states. However the relation $\Delta U=-W_{\mathrm{ad}}$ no longer holds. To define $\Delta U$ for any two states, i.e., to define the internal energy as a state function, we have to add a term that makes the internal energy path independent. We call this term heat and write the first law as $\Delta U=Q-W$.

There are beautiful discussions about the first law and the concept of heat that may pleases you on (in order of level) Atkins - The Laws of Thermodynamics; Van Ness - Understanding Thermodynamics; Fermi - Thermodynamics. These questions and their answer also may be helpful: Definitions in thermodynamics: temperature, thermal equilibrium, heat, How to define heat and work?.

Not the answer you're looking for? Browse other questions tagged thermodynamics energy work definition or ask your own question.

5
How to define heat and work?
4
Definitions in thermodynamics: temperature, thermal equilibrium, heat