Why doesn't the conservation of linear momentum hold in this case? 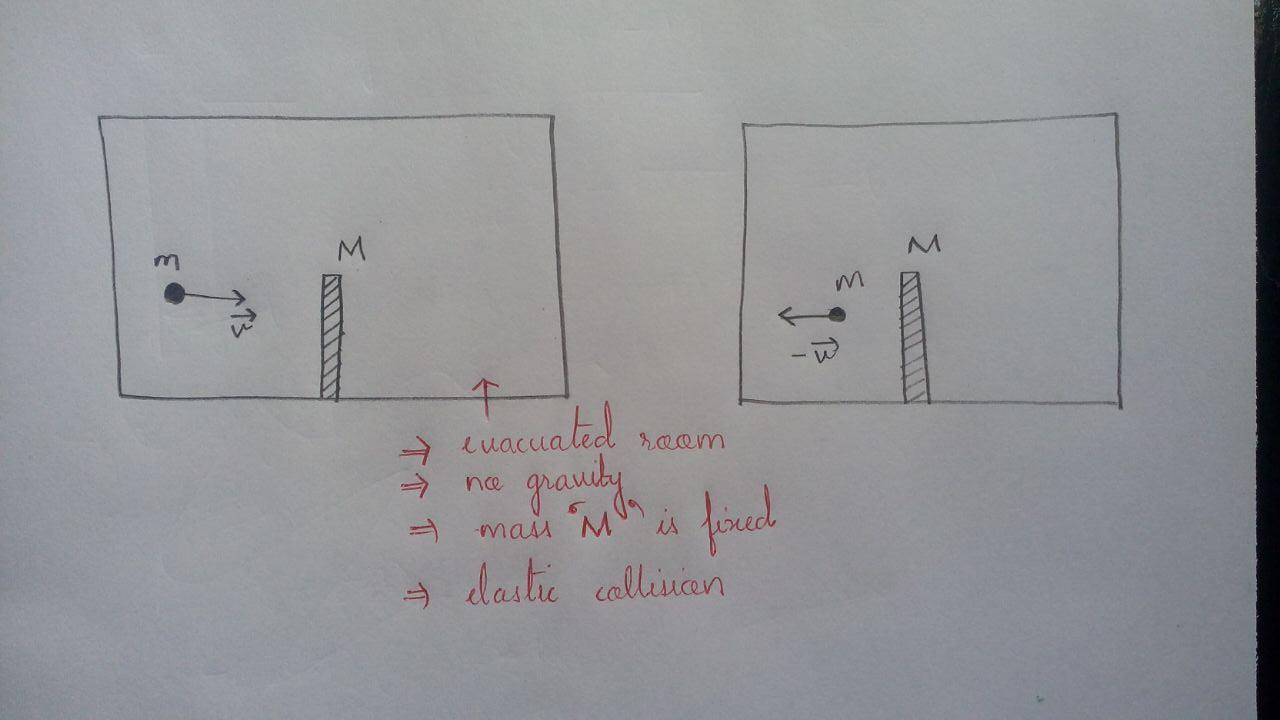 So the little box in the image shows my isolated system consisting of two masses $m$ and $M$ of which $M$ is fixed to the floor of the system–it cannot be moved. The system is evacuated and in space (hence free from the influence of gravity). Furthermore the collision of $m$ and $M$ is elastic.

Isn't this a contradiction to the consecration of linear momentum in an isolated system?

You are right that there is a contradiction in the scenario you set up. In fact, the contradiction comes in your very first sentence:

my isolated system ... of which $M$ is fixed to the floor of the system.

You have to pick. Either the system is isolated, or the mass $M$ is interacting with the "floor". You can't have both. Therefore you should not be surprised that starting from this contradictory premise, you have derived other seemingly impossible results.

I think it would be helpful to discuss three correct ways of setting up the problem. The first way will be where an external agent is holding the mass $M$ fixed. The second case will be where the masses are truly isolated. For the third case, we will take again the case where the masses are truly isolated, but we will look at the motion in a frame fixed to the mass $M$.

In the first case, where the mass $M$ is fixed in place by an external agent, the momentum of the two mass system does indeed change from $m\vec{v}$ to $-m\vec{v}$, and so the momentum of this system is not conserved, but that is allowed since it is not an isolated system. Momentum is transferred to the external agent through the force used to hold the mass $M$ in place. Therefore total momentum is still conserved.

Now in the second case where we assume the masses are isolated, the mass $M$ recoils when impacted by the mass $m$, and the amount that it recoils is exactly determined by conservation of momentum, so momentum is again conserved in this case.

The third and final case is where both systems are isolated, but we view the motion in the frame of the mass $M$. Here there does seem to be a contradiction because the masses truly are isolated, and the mass $M$ truly does appear to be fixed. The resolution to this contradiction is that the frame is non-inertial, and Newton's laws are asserted to be true in inertial frames. The frame fixed to the mass $M$ accelerates at the instant of the collision, which is exactly when the total momentum seems to change.

So any way you analyze the situation, as long as you are consistent, you get a reasonable result.

Momentum is always conserved in inertial frames. In this case, you've neglected the momentum of the wall after the collision. Let me add two remarks: