Several questions about experiment in pressure and fluid 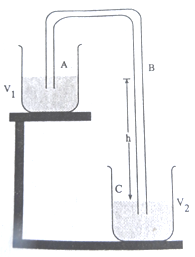 Yes, air inside the eyedropper does get compressed, but that's not the important point. The important point is that more water enters the eyedropper. This means that there is more mass $m$ inside the eyedropper but still the same total volume $V$. Therefore the density $\rho$ rises: $$\rho=\frac mV$$ Something less dense will float in something more dense. The density of the outside water doesn't change significantly (there is no air to compress, and water compresses very, very little - which is why it enters the eyedropper in the first place, since it has nowhere else to go). So if the density of eyedropper increases enough to become larger than that of the outside water, it sinks.

When liquid moves ahead inside the tube, the low pressure behind it sucks up more liquid.

But it doesn't work like you have described it: Liquid won't go upwards from the lower B to the higher A cup - it will only go downwards from the higher to the lower. The trick is not moving liquid up hill, but it does move liquid over obstacles on the way towards a lower point.

Have a look at this film.

Not the answer you're looking for? Browse other questions tagged fluid-dynamics experimental-physics pressure potential-energy or ask your own question.

2
Pressure inside a submerged rigid box, and how to change it
0
Air pressue inside a squeezed plastic bottle
4
Capillary Rise and a Surfactant - Experiment
1
Which of the two events will occur first
0
Fluid dynamics in ambient air pressure
0
Dissolving air in water using a bicycle pump
0
Why air rushes out of bottle if we pore hot water in it and close cap and squeeze when air moves out?
1
Why in a similar situation water falls of even though from other side no air can come inside?
3
Why is the pressure inside the bottle lower than atm pressure?