Consider a supercooled liquid. If a spherical solid crystal appears, the variation of the free Gibbs energy is given by

where $\Delta g$ is considered the variation of the Gibbs energy per volume between the liquid and the solid phase, $\Delta g > 0$. 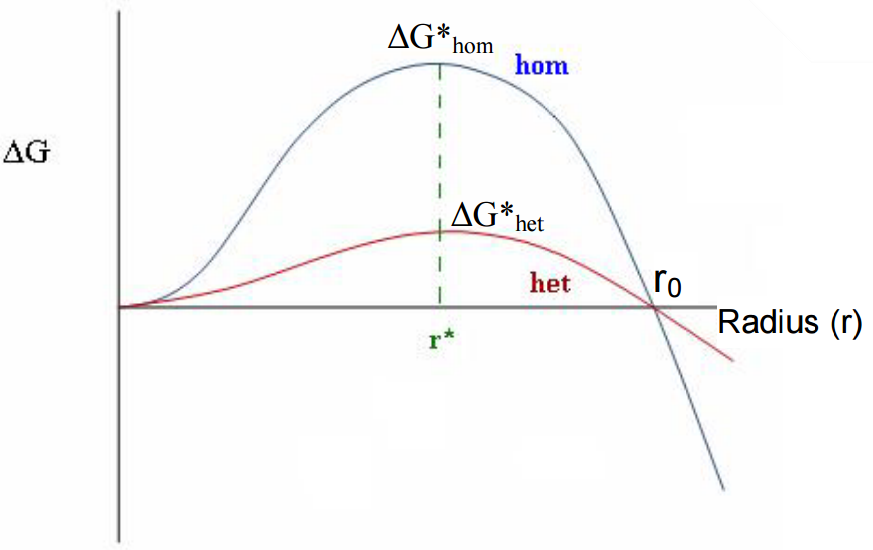 My professor asked us to determine the critical radius at which the solid spheres become more favourable energetically and thus, the supercooled liquid begins crystallising. She meant us to find $r^*$.

I think we should rather be looking at $r_0$, since it is the variation of $G$ - only at that point does the $\Delta G$ becomes negative, which is necessary for a process to spontaneously happen.

Multiple sources treat $r^*$ as the minimum radius, but I fail to see how the maximum of $\Delta G$ would be more important that the point at which it becomes negative.

So, which one is the minimum radius the solid sphere has to grow to, in order for the liquid to solidify ?

If you are to the left of the maximum, i.e. $r \lt r^*$, then the Gibbs free energy is reduced by reducing the value of $r$. That is any particle of a size $r \lt r^*$ will spontaneously shrink.

Conversely, if you are to the right of the maximum, i.e. $r \gt r^*$, then the Gibbs free energy is reduced by increasing the value of $r$. That is any particle of a size $r \gt r^*$ will spontaneously grow.

And a particle with $r$ exactly equal to $r^*$ is stable, though it's an unstable equilbrium.

It is important not to confuse kinetics with thermodynamics. Suppose we produce a particle with a radius slightly greater than $r^*$. The free energy change for this is positive so the particle won't appear spontaneously.

However in any random system we have continual statistical fluctuations happening, so although the average free energy is well defined on a small scale regions of the system can have a free energy momentarily larger than the average. The probability of this happening is given by the Boltzmann distribution:

So even though it is thermodynamically unfavourable to produce a particle of $r \gt r^*$ some of those particles will be produced as the result of statistical fluctuations. And as soon as those particles are produced they will start to grow and you'll end up with the production of large particles.

The system you describe is an example of a system that is overall thermodynamically unstable but has an activation energy i.e. a barrier that the system has to climb in order to change. In this case that barrier is the energy $\Delta G^*$. Any part of that system that can make it to just over the barrier, i.e. $r$ just greater than $r^*$ will get through the barrier and form a growing particle. That's why $r^*$ is the critical radius.

Not the answer you're looking for? Browse other questions tagged thermodynamics phase-transition nucleation or ask your own question.