The Washington Post article This black hole is being pushed around its galaxy by gravitational waves also includes an excellent NASA Goddard video description (also in YouTube) of the proposed explanation of the offset of a galaxy's super massive black hole from, and velocity away from the center of the galaxy. The object in this example is Galaxy Cluster, Quasar 3C 186. See also NASA news item Gravitational Wave Kicks Monster Black Hole Out of Galactic Core. 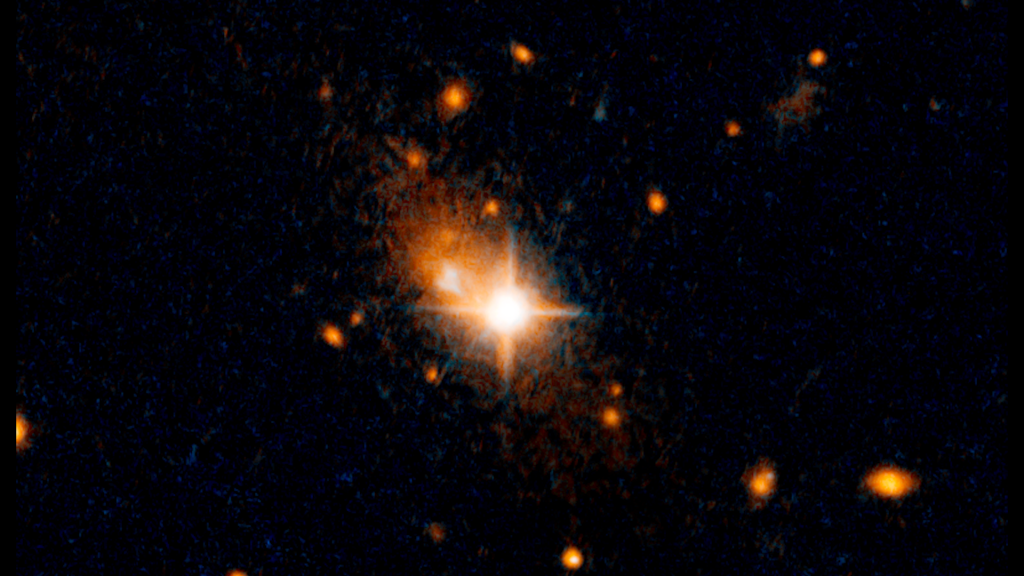 above: The Hubble Space Telescope image that revealed the runaway quasar. (NASA, ESA, and M. Chiaberge/STScI and JHU) From here.

A proposed explanation can be found in the ArXiv preprint Chiaberge et al (2016) The puzzling radio-loud QSO 3C 186: a gravitational wave recoiling black hole in a young radio source?.

[...]Recoiling black holes (BH) may also result from BH-BH mergers and the associated anisotropic emission of gravitational waves (GW, Peres 1962; Beckenstein et al. 1973). The resultant merged BH may receive a kick and be displaced or even ejected from the host galaxy (Merritt et al. 2004; Madau & Quataert 2004; Komossa 2012), a process that has been extensively studied with simulations (Campanelli et al. 2007; Blecha et al. 2011, 2016). Typically, for non-spinning BHs, the expected velocity is of the order of a few hundreds of km s−1, or less. Recent work based on numerical relativity simulations have shown that superkicks of up to ∼ 5000 km s−1 are possible, but are expected to be rare (e.g. Campanelli et al. 2007; Brügmann et al. 2008).

If I understand the proposed explanation correctly, if the galaxy was formed as a merger of two (or more) galaxies, each with a central super massive black hole, and the two black holes merge through spin-down by gravitational radiation, and if they are of unequal masses, the resulting merged black hole can interact with the gravitational waves and receive a "kick", and fly off in one direction rather than remain at the center of mass of the two black holes.

So it seems that gravitational waves can impart linear momentum to objects - but how? What if a wave from an unrelated even was incident on separate black hole, or a start - would it also give them a "kick" - transfer some net linear momentum to them as it passes?

The momentum bestowed by a passing gravitational wave (GW) on an object is always going to be negligible (there may may be situations when the energy deposition is non-negligible... but rarely and frankly unlikely). The key is in the momentum carried away by anisotropic GW emission from the object itself.

You can think about this in terms of the energy emitted in GW can be quite effective, for example, the GW151226 event released about 5% of the total-rest mass of the system as GW energy (that's big). At the same time, the coupling of GWs to material they pass through is extremely small (the coupling constant is $G/c^2 \approx 10^{-28}$; very small).

Beaming Kicks
The way these post-merger BH (note: it works both for supermassive or stellar mass black hole mergers) receive their 'kicks' is by emitting GWs (which carry energy and momentum) anisotropically---i.e. preferentially in a certain direction. The simplest way to consider this happening is from an unequal mass ratio system, where one BH is more massive than the other. In an unequal mass system, each object in the binary has a different velocity (with the lower-mass orbiting faster). GW exhibit relativistic beaming (I only skimmed this article, but it might also be interesting) in which emission is enhanced along the direction of motion as a result of the (relativistic) doppler effect. This means that the GW from the smaller object will be more beamed than the larger object. The last important piece to consider is that just before coalescence, the orbit is shrinking rapidly, and the GW luminosity increases very rapidly. Thus, in the fraction of an orbit before they merge, the smaller object emits the strongest GW, beamed along its direction of motion, carrying momentum, which accelerates the system in the opposite direction, finally giving it a 'kick'.

Spin kicks
Actually, the strongest kicks aren't from unequal mass ratios, they're from misaligned spins (there are lots of papers on this, but 1, 2, 3 come to mind). This is a more complicated effect to understand conceptually (and I'm not sure how much I do understand it conceptually), but the basic idea is that you have two dense objects spinning fast enough that the spin contains a significant fraction of their mass energy, and they are spinning in nearly opposite directions before merger. The spacetime local to each BH is also spinning rapidly. After merger the new (single-)BH has to have a single spin. Transitioning from the two (misaligned spins) to a single one, along with the local spacetime, ends up being a violent process that can kick the BH remnant up to relativistic velocities. (Perhaps this is like throwing a stick into the spokes of a spinning wheel?).

Not the answer you're looking for? Browse other questions tagged black-holes astrophysics gravitational-waves or ask your own question.