I’m writing a SF story with a question about an element of my plot. I have a Manhattan-sized NiFe asteroid, with little or no spin, in orbit at 2.5 astronomical units from the Sun.

Would it be reasonable to assume that the potato-shaped Ni-Fe asteroid, undisturbed for millennia, would settle into an orbit with its long axis (through the c.g.) parallel to its velocity vector? 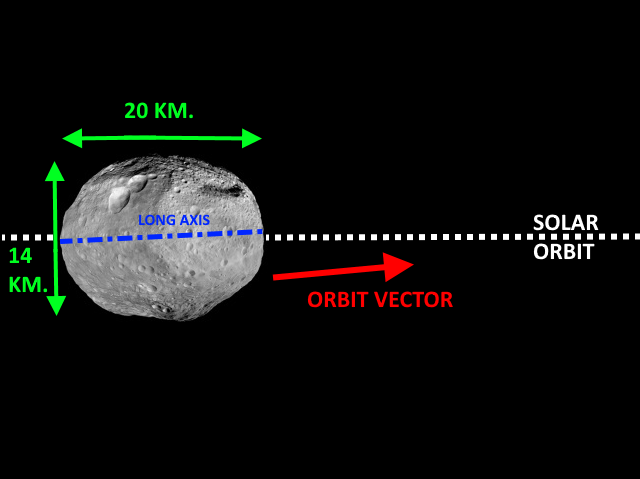 N.B.: I did not read the question carefully enough, and so the answer below answers a different question than the one was asked, namely "is it possible for the long-term spin axis of an asteroid to align with its long axis?" I have left it up for posterity.

The reason for this is the following. The angular momentum vector $\vec{L}$ of a rotating body is constant in space. However, if a body is not rotating about its symmetry axis, the different parts of the body will experience time-dependent centripetal acceleration (due to the precession of the angular velocity vector $\vec{\omega}$ in the body frame.) If the body is not perfectly rigid, it will deform ever so slightly under these forces, and frictional forces due to this time-dependent "kneading" will slowly sap the body's rotational kinetic energy.

Don't believe me? Well, just ask the folks who launched Explorer I, the first US satellite:

Explorer 1 changed rotation axis after launch. The elongated body of the spacecraft had been designed to spin about its long (least-inertia) axis but refused to do so, and instead started precessing due to energy dissipation from flexible structural elements. Later it was understood that on general grounds, the body ends up in the spin state that minimizes the kinetic rotational energy for a fixed angular momentum (this being the maximal-inertia axis). This motivated the first further development of the Eulerian theory of rigid body dynamics after nearly 200 years—to address this kind of momentum-preserving energy dissipation.

The above argument is paraphrased from Ch. 7 of Kleppner & Kolenkow's Introduction to Mechanics. More detailed information can be found in the following review:

No. Not only is there no reason to expect this, but it is especially unlikely to occur. For the asteroid to remain "pointing" along it's velocity vector, that means that it actually completes a rotation with the exact same period as it's orbit. This is called "tidal locking" and requires tidal forces to be important. Tidal forces scale like,

For an object of size $L$ (in this case very very small for an asteroid) and a distance between objects of $r$ (where here, $r = 2.5AU$). Even Mercury's orbit isn't tidally locked (corrected by @rob, thanks!). So the only reason this asteroid would continue to point in the same direction is if it coincidentally happened to have the exact right spin angular momentum.

1
Stresses in asteroid during close flyby
14
Mars just collided with Earth! A question of eccentricity
4
Would a considerably big asteroid be disintegrated by the Earth's Roche limit?
3
How can an asteroid fall to a planet?
0
Is it possible to create Dyson sphere or ring using asteroid belt?
0
What is the interplay between the "spinning tennis racket" effect on a planet with three principle axis of rotation and its moon?
0
Could an asteroid capture an object and bring it into orbit as the asteroid moves through space?
3
Explosion of an asteroid in orbit
0
How do I calculate evection and variation for the moon in my simple solar system model?
0
How does the Sun's gravity affect the shape of the orbit of the Moon around the Earth?