While coordinating an introductory physics lab on the Lorentz force, I came across a behavior which I hadn't seen before and for which I didn't have a ready explanation. The experiment consisted of putting a CRT tube in a uniform magnetic field causing the electron beam to curve and therefore move visibly on the screen. For this purpose, they placed the CRT in a Helmholtz coil.

To get some qualitative sense of what's going on, they also had some bar magnets on hand. They were only supposed to use one such magnet for this purpose, and in that case the dot on the CRT screen moves as expected: If the north pole is placed on the left side of the CRT (relative to the front screen) the electron beam moves down; if it's placed on the right side, it moves up. If both are done at the same time, these two effects could be expected to approximately cancel out. And, indeed, the center of the dot remains near the center of the screen in that case.

However, in practice I furthermore observe that the circular dot on the screen becomes squeezed into an ellipse: the closer the magnets are placed to the electron gun, the stronger this effect. In addition, the squeezing appears to be at a 45 angle to the line of the magnets i.e. half the electrons are deflected up-and-to-the-right of the center, and half are deflected the other direction. (If the magnets are flipped so that their south poles are close to each side of the CRT, then the pattern flips from left-to-right.)

My basic guess is that magnetic fields of the two magnets are serving as a 'lens' for the electron beam; indeed, I think the CRT itself contains a quadrupole magnetic lens near its filament for this purpose. However, in that case I'd have naively expected the squeezing to occur along either parallel or perpendicular to the axis of the magnets. Is there an easy explanation for why the squeezing is along the diagonal instead?

The diagonal shape is easily explained. The two figures below show the effect of magnets placed on the sides of the crt. Imagine an electron beam flowing towards you in the center of each image. 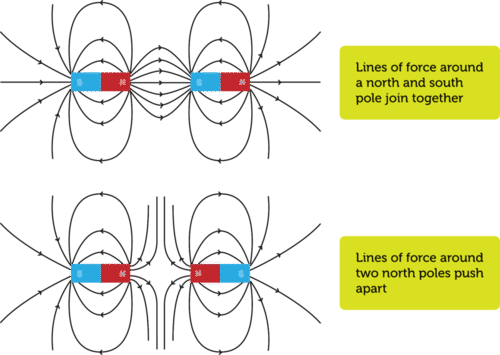 The top figure shows the first experiment: a magnetic field from side to side bends the electrons up or down.

The bottom figure shows the second experiment. The fields from the two magnets cancel each other in the center, but there are field lines just outside of the center, which run approximately diagonally. As always the electrons will be accelerated in a direction perpendicular to the field lines and to the direction of motion. Applying your favorite mnemonic for Lorentz forces will show that on one diagonal the forces are directed towards the center, while on the other diagonal the forces are directed away from the center.

This is exactly what you observed.

Not the answer you're looking for? Browse other questions tagged electromagnetism magnetic-fields electrons or ask your own question.

11
How do permanent magnets manage to focus field on one side?
1
How electrons act under rotating magnetic field?
5
Can a magnetic field be focused at a distance?
3
How do electrons in a cathode ray remain in a straight line if they are all negatively charged?
1
What happens with this magnet/current system?
2
Lorentz force in superposition of two magnetic fields
0
Can a magnet induce current in a stationary, straight copper wire?